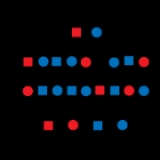 Encyclopedia
Neurofibromatosis
Neurofibromatosis
Neurofibromatosis is a genetically-inherited disorder in which the nerve tissue grows tumors that may be benign or may cause serious damage by compressing nerves and other tissues...
type I (NF-1), formerly known as von Recklinghausen
Friedrich Daniel von Recklinghausen
Friedrich Daniel von Recklinghausen was a German pathologist who practiced medicine in Würzburg and Strassburg . Born in Gütersloh, Westphalia, he was the father of physiologist Heinrich von Recklinghausen ....
disease after the researcher (Friedrich Daniel von Recklinghausen) who first documented the disorder, is a human genetic disorder
Genetic disorder
A genetic disorder is an illness caused by abnormalities in genes or chromosomes, especially a condition that is present from before birth. Most genetic disorders are quite rare and affect one person in every several thousands or millions....
. It is possibly the most common inherited disorder caused by a single gene. NF-1 is not to be confused with Proteus Syndrome
Proteus syndrome
Proteus syndrome, also known as Wiedemann's syndrome , is a congenital disorder that causes skin overgrowth and atypical bone development, often accompanied by tumors over half the body....
(the syndrome which may have affected The Elephant Man
Joseph Merrick
Joseph Carey Merrick , sometimes incorrectly referred to as John Merrick, was an English man with severe deformities who was exhibited as a human curiosity named the Elephant Man. He became well known in London society after he went to live at the London Hospital...
), but rather is a separate disorder. It is a RASopathy
RASopathy
The RASopathies are developmental syndromes caused by germline mutations in genes that alter the Ras subfamily and Mitogen-activated protein kinase that control Signal transduction, including:*Capillary malformation-AV malformation syndrome...
. In diagnosis it may also be confused with Legius syndrome
Legius syndrome
Legius syndrome is an autosomal dominant condition characterized by cafe au lait spots. It is often mistaken for Neurofibromatosis type I . It is caused by mutations in the SPRED1 gene. It is also known as Neurofibromatosis Type 1-like syndrome .The syndrome is named after Eric Legius,...
.

NF-1 is a tumor disorder that is caused by the malfunction of a gene
Gene
A gene is a molecular unit of heredity of a living organism. It is a name given to some stretches of DNA and RNA that code for a type of protein or for an RNA chain that has a function in the organism. Living beings depend on genes, as they specify all proteins and functional RNA chains...
on chromosome
Chromosome
A chromosome is an organized structure of DNA and protein found in cells. It is a single piece of coiled DNA containing many genes, regulatory elements and other nucleotide sequences. Chromosomes also contain DNA-bound proteins, which serve to package the DNA and control its functions.Chromosomes...
17 that is responsible for control of cell division.
NF-1 causes non-cancerous lumps. NF-1 often comes with scoliosis (curvature of the spine), learning difficulties, eye problems, and epilepsy. 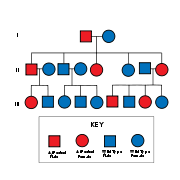 The mutant gene is transmitted with an autosomal dominant pattern of inheritance, but up to 50% of NF-1 cases arise due to spontaneous mutation. The incidence of NF-1 is about 1 in 3500 live births.

Mutations in the NF1 gene have been linked to NF-1, Juvenile myelomonocytic leukemia
Juvenile myelomonocytic leukemia
Juvenile myelomonocytic leukemia is a serious chronic leukemia that affects children mostly aged 4 and younger. The average age of patients at diagnosis is 2 years old. The World Health Organization has included JMML in the category of Myelodysplastic and Myeloproliferative disorders...
and Watson syndrome
Watson syndrome
Watson syndrome is an autosomal recessive condition characterized by Lisch nodules, axillary/inguinal freckling, and neurofibromas.Watson syndrome may be allelic to NF1, the same gene associated with Neurofibromatosis type 1.- References :...
. A condition with a separate gene mutation but similar Café au lait spot
Café au lait spot
Café au lait spots or Café au lait macules are pigmented birthmarks. The name café au lait is French for "milky coffee" and refers to their light-brown color...
s is Legius syndrome
Legius syndrome
Legius syndrome is an autosomal dominant condition characterized by cafe au lait spots. It is often mistaken for Neurofibromatosis type I . It is caused by mutations in the SPRED1 gene. It is also known as Neurofibromatosis Type 1-like syndrome .The syndrome is named after Eric Legius,...
which has a mutation on the SPRED1 gene
SPRED1 gene
Sprouty-related, EVH1 domain-containing protein 1 is a protein that in humans is encoded by the SPRED1 gene located on chromosome 15q13.2 and has seven coding exons.- Function :...
.


Discovery of the Neurofibromin gene


Structure of the Neurofibromin gene

The Neurofibromin gene was soon sequenced and found to be 350,000 base pairs in length. However, the protein is 2818 amino acids long leading to the concept of splice variants. For example, exon 9a, 23a and 48a are expressed in the neurons of the forebrain, muscle tissues and adult neurons respectively.

Homology studies have shown that neurofibromin is 30% similar to proteins in the GTPase Activating Protein (GAP) Family. This homologous sequence is in the central portion of neurofibromin and being similar to the GAP family is recognized as a negative regulator of the Ras kinase.

Additionally, being such a large protein, more active domains of the protein have been identified. One such domain interacts with the protein adenylyl cyclase
Adenylate cyclase
Adenylate cyclase is part of the G protein signalling cascade, which transmits chemical signals from outside the cell across the membrane to the inside of the cell ....
, and a second with collapsin response mediator protein
CRMP1
Collapsin response mediator protein 1, encoded by the CRMP1 gene, is a human protein of the CRMP family.This gene encodes a member of a family of cytosolic phosphoproteins expressed exclusively in the nervous system...
. Together, likely with domains yet to be discovered, neurofibromin regulates many of the pathways responsible for overactive cell proliferation, learning impairments, skeletal defects and plays a role in neuronal development.

The National Institute of Health (NIH) has created specific criteria for the diagnosis of NF-1. Two of these seven "Cardinal Clinical Features" are required for positive diagnosis.

NF-1 is such a progressive and diverse condition that it makes it difficult to predict. The NF-1 gene manifest the disorder differently even amongst members of the same family. For example, some individuals have no symptoms, while others may have a manifestation that is rapidly more progressive and severe.

For many NF-1 patients, a primary concern is the disfigurement caused by cutaneous/dermal neurofibromas, pigmented lesions, and the occasional limb abnormalities.

However, there are many more severe complications caused by NF-1, but some of them are quite rare and they are listed in the following section.

There is no cure for the disorder itself. Instead, people with neurofibromatosis are followed by a team of specialists to manage symptoms or complications. In progress and recently concluded medical studies on NF-1 can be found by searching the official website of the National Institute of Health.

Here we list conditions and complications associated with NF-1, and, where available, age range of onset and progressive development, occurrence percentage of NF-1 population, method of earliest diagnosis, and treatments and related medical specialties. The progression of the condition is roughly as follows:


Skull
Skull
The skull is a bony structure in the head of many animals that supports the structures of the face and forms a cavity for the brain.The skull is composed of two parts: the cranium and the mandible. A skull without a mandible is only a cranium. Animals that have skulls are called craniates...


Spine
Vertebral column
In human anatomy, the vertebral column is a column usually consisting of 24 articulating vertebrae, and 9 fused vertebrae in the sacrum and the coccyx. It is situated in the dorsal aspect of the torso, separated by intervertebral discs...


Neurofibroma
Neurofibroma
A neurofibroma is a benign nerve sheath tumor in the peripheral nervous system. Usually found in individuals with neurofibromatosis type I , an autosomal dominant genetically-inherited disease, they can result in a range of symptoms from physical disfiguration and pain to cognitive disability...

Neurofibroma conditions are progressive and include:

Intracranially, NF-1 patients have a predisposition to develop glial tumors of the central nervous system, primarily:

Another CNS manifestation of NF-1 is the so-called "unidentified bright object" or UBO, which is a lesion which has increased signal on a T2 weighted sequence of a magnetic resonance imaging
Magnetic resonance imaging
Magnetic resonance imaging , nuclear magnetic resonance imaging , or magnetic resonance tomography is a medical imaging technique used in radiology to visualize detailed internal structures...
examination of the brain. These UBOs are typically found in the Cerebral peduncle
Cerebral peduncle
Mainly, the three common areas that give rise to the cerebral peduncles are the cortex, the spinal cord and the cerebellum. The cerebral peduncle, by most classifications, is everything in the mesencephalon except the tectum. The region includes the midbrain tegmentum, crus cerebri and pretectum...
, pons, midbrain, globus pallidus, thalamus, and optic radiations. Their exact identity remains a bit of a mystery since they disappear over time (usually, by age 16), and they are not typically biopsied or resected. They may represent a focally degenerative bit of myelin
Myelin
Myelin is a dielectric material that forms a layer, the myelin sheath, usually around only the axon of a neuron. It is essential for the proper functioning of the nervous system. Myelin is an outgrowth of a type of glial cell. The production of the myelin sheath is called myelination...
.

Within the CNS, NF-1 manifests as a weakness of the dura
Dura mater
The dura mater , or dura, is the outermost of the three layers of the meninges surrounding the brain and spinal cord. It is derived from Mesoderm. The other two meningeal layers are the pia mater and the arachnoid mater. The dura surrounds the brain and the spinal cord and is responsible for...
, which is the tough covering of the brain and spine. Weakness of the dura leads to focal enlargement terms dural ectasia
Dural ectasia
Dural ectasia is a widening or ballooning of the dural sac surrounding the spinal cord usually at the lumbosacral level. It is one of the major manifestations of Marfan syndrome. It may cause low back pain, headaches and neurological signs such as weakness and loss of bowel and bladder function,...
due to chronic exposure to the pressures of CSF
Cerebrospinal fluid
Cerebrospinal fluid , Liquor cerebrospinalis, is a clear, colorless, bodily fluid, that occupies the subarachnoid space and the ventricular system around and inside the brain and spinal cord...
pulsation.


Cancer
Cancer
Cancer , known medically as a malignant neoplasm, is a large group of different diseases, all involving unregulated cell growth. In cancer, cells divide and grow uncontrollably, forming malignant tumors, and invade nearby parts of the body. The cancer may also spread to more distant parts of the...