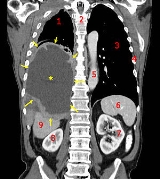 Overview
Cancer ˈkænsər, known medically as a malignant neoplasm, is a large group of different disease
Disease
A disease is an abnormal condition affecting the body of an organism. It is often construed to be a medical condition associated with specific symptoms and signs. It may be caused by external factors, such as infectious disease, or it may be caused by internal dysfunctions, such as autoimmune...
s, all involving unregulated cell growth. In cancer, cell
Cell (biology)
The cell is the basic structural and functional unit of all known living organisms. It is the smallest unit of life that is classified as a living thing, and is often called the building block of life. The Alberts text discusses how the "cellular building blocks" move to shape developing embryos....
s divide and grow uncontrollably, forming malignant tumors, and invade nearby parts of the body. The cancer may also spread
Metastasis
Metastasis, or metastatic disease , is the spread of a disease from one organ or part to another non-adjacent organ or part. It was previously thought that only malignant tumor cells and infections have the capacity to metastasize; however, this is being reconsidered due to new research...
to more distant parts of the body through the lymphatic system
Lymph
Lymph is considered a part of the interstitial fluid, the fluid which lies in the interstices of all body tissues. Interstitial fluid becomes lymph when it enters a lymph capillary...
or blood
Blood
Blood is a specialized bodily fluid in animals that delivers necessary substances such as nutrients and oxygen to the cells and transports metabolic waste products away from those same cells....
stream. Not all tumors are cancerous. Benign tumors do not grow uncontrollably, do not invade neighbouring tissues, and do not spread throughout the body.
Healthy cells control their own growth and will destroy themselves
Apoptosis
Apoptosis is the process of programmed cell death that may occur in multicellular organisms. Biochemical events lead to characteristic cell changes and death. These changes include blebbing, cell shrinkage, nuclear fragmentation, chromatin condensation, and chromosomal DNA fragmentation...
if they become unhealthy.

Does anyone know where you can but ABMK (agaricus blazei murill kyowa)liquid gold - a mushroom extract produced in Japan repuited to have a positive e...
More
x