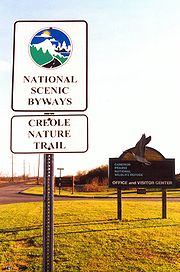 The most scenic of the roads in the program are designated All-American Roads. The designation means they have features that do not exist elsewhere in the United States and are scenic enough to be tourist destinations unto themselves. As of November 2010, there are 120 National Scenic Byways and 31 All-American Roads, located in 46 states (all except Hawaii, Nebraska, Rhode Island, and Texas).

National Scenic Byways must go through a nomination procedure, and must already be designated as a state scenic byway in order to be nominated (However, roads that meet all criteria and requirements for National designation but not State or designation criteria may be considered for national designation on a case-by-case basis).

To be considered for designation as a National Scenic Byway "a road or highway must significantly meet at least one of the six scenic byways intrinsic qualities". To be designated as an All-American Road, a road must meet at least two of the six qualities. The qualities are:


A "corridor management plan" must also be developed, with community involvement, and the plan "should provide for the conservation and enhancement of the byway's intrinsic qualities as well as the promotion of tourism and economic development". The plan includes, but is not limited to:


Corridor management plans for All-American Roads must also include:


The final step is when the highway (or highways) is approved for designation by the Secretary of Transportation.