Encyclopedia
The Liberty Memorial, located in Kansas City
Kansas City, Missouri
Kansas City, Missouri is the largest city in the U.S. state of Missouri and is the anchor city of the Kansas City Metropolitan Area, the second largest metropolitan area in Missouri. It encompasses in parts of Jackson, Clay, Cass, and Platte counties...
, Missouri
Missouri
Missouri is a US state located in the Midwestern United States, bordered by Iowa, Illinois, Kentucky, Tennessee, Arkansas, Oklahoma, Kansas and Nebraska. With a 2010 population of 5,988,927, Missouri is the 18th most populous state in the nation and the fifth most populous in the Midwest. It...
, USA
United States
The United States of America is a federal constitutional republic comprising fifty states and a federal district...
, is a memorial to the fallen soldiers of World War I
World War I
World War I , which was predominantly called the World War or the Great War from its occurrence until 1939, and the First World War or World War I thereafter, was a major war centred in Europe that began on 28 July 1914 and lasted until 11 November 1918...
and houses the The National World War I Museum, as designated by the United States Congress
United States Congress
The United States Congress is the bicameral legislature of the federal government of the United States, consisting of the Senate and the House of Representatives. The Congress meets in the United States Capitol in Washington, D.C....
in 2004.. Groundbreaking
Groundbreaking
Groundbreaking, also known as cutting, sod-cutting, turning the first sod or a sod-turning ceremony, is a traditional ceremony in many cultures that celebrates the first day of construction for a building or other project. Such ceremonies are often attended by dignitaries such as politicians and...
commenced November 1, 1921, and the city held a site dedication. The memorial was completed and dedicated on November 11, 1926.

By the time World War I ended on November 11, 1918, many citizens of Kansas and Missouri had lost their lives and a movement to build a monument for their sacrifices and the surviving veterans arose. A group of 40 prominent citizens formed a Memorial Association and chose lumber baron
Business magnate
A business magnate, sometimes referred to as a capitalist, czar, mogul, tycoon, baron, oligarch, or industrialist, is an informal term used to refer to an entrepreneur who has reached prominence and derived a notable amount of wealth from a particular industry .-Etymology:The word magnate itself...
and philanthropist
Philanthropy
Philanthropy etymologically means "the love of humanity"—love in the sense of caring for, nourishing, developing, or enhancing; humanity in the sense of "what it is to be human," or "human potential." In modern practical terms, it is "private initiatives for public good, focusing on quality of...
Robert A. Long
Robert A. Long
Robert Alexander Long was a lumber baron, developer, investor, newspaper owner, millionaire, and philanthropist. He lived most of his life in Kansas City, Missouri and founded the city of Longview, Washington and the town of Longville, Louisiana....
, who had personally given a large sum of money, as president. Others included:

The city council appointed the association to look into the possibility of a monument and funding. In less than a year the association had spearheaded a fund drive that included 83,000 contributors and collected more than 2.5 million dollars. There would not be the monetary problems that plagued the Bunker Hill Monument
Bunker Hill Monument
-External links:****: cultural context**...
.

It was dedicated on November 11, 1926, by U.S. President Calvin Coolidge
Calvin Coolidge
John Calvin Coolidge, Jr. was the 30th President of the United States . A Republican lawyer from Vermont, Coolidge worked his way up the ladder of Massachusetts state politics, eventually becoming governor of that state...
. In attendance at the groundbreaking ceremony on November 1, 1921, were Lieutenant General Baron Jacques of Belgium, Admiral Earl Beatty
David Beatty, 1st Earl Beatty
Admiral of the Fleet David Richard Beatty, 1st Earl Beatty, GCB, OM, GCVO, DSO was an admiral in the Royal Navy...
of Great Britain
Great Britain
Great Britain or Britain is an island situated to the northwest of Continental Europe. It is the ninth largest island in the world, and the largest European island, as well as the largest of the British Isles...
, General Armando Diaz
Armando Diaz
Armando Diaz, 1st Duca della Vittoria was an Italian general and a Marshal of Italy.Born in Naples, Diaz began his military career as a student at the Military Academy of Turin, where he became an artillery officer. He was a colonel commanding the 93rd infantry during the Italo-Turkish War, and...
of Italy
Italy
Italy , officially the Italian Republic languages]] under the European Charter for Regional or Minority Languages. In each of these, Italy's official name is as follows:;;;;;;;;), is a unitary parliamentary republic in South-Central Europe. To the north it borders France, Switzerland, Austria and...
, Marshal Ferdinand Foch
Ferdinand Foch
Ferdinand Foch , GCB, OM, DSO was a French soldier, war hero, military theorist, and writer credited with possessing "the most original and subtle mind in the French army" in the early 20th century. He served as general in the French army during World War I and was made Marshal of France in its...
of France
France
The French Republic , The French Republic , The French Republic , (commonly known as France , is a unitary semi-presidential republic in Western Europe with several overseas territories and islands located on other continents and in the Indian, Pacific, and Atlantic oceans. Metropolitan France...
, and General John Pershing of the United States
United States
The United States of America is a federal constitutional republic comprising fifty states and a federal district...
. In 1935, bas reliefs by Walker Hancock
Walker Hancock
Walker Kirtland Hancock was a 20th-century American sculptor and teacher. He created notable monumental sculptures, including the Pennsylvania Railroad World War II Memorial at 30th Street Station in Philadelphia, Pennsylvania...
of Jacques, Beatty, Diaz, Foch and Pershing were unveiled.

The Memorial and Monument are managed by a non-profit organization in cooperation with the Kansas City Board of Parks and Recreation Commissioners.

The design of the building is designed in the classical Egyptian Revival style of architecture with a limestone
Limestone
Limestone is a sedimentary rock composed largely of the minerals calcite and aragonite, which are different crystal forms of calcium carbonate . Many limestones are composed from skeletal fragments of marine organisms such as coral or foraminifera....
exterior. The foundation was constructed using sawed granite
Granite
Granite is a common and widely occurring type of intrusive, felsic, igneous rock. Granite usually has a medium- to coarse-grained texture. Occasionally some individual crystals are larger than the groundmass, in which case the texture is known as porphyritic. A granitic rock with a porphyritic...
, and the exterior ground level walls are made of Bedford stone. The main doors at the top of a large set of stairs are made from ornamental bronze, and the walls of the first floor lobby are finished in Kasota stone, which was quarried in Kasota, Minnesota
Kasota, Minnesota
Kasota is a city in Le Sueur County, Minnesota, United States. The population was 675 at the 2010 census.-Geography:According to the United States Census Bureau, the city has a total area of , all of it land....
. The first floor corridor and the grand stairway are finished in travertine
Travertine
Travertine is a form of limestone deposited by mineral springs, especially hot springs. Travertine often has a fibrous or concentric appearance and exists in white, tan, and cream-colored varieties. It is formed by a process of rapid precipitation of calcium carbonate, often at the mouth of a hot...
that was imported from Italy. The floors of the corridors and stairway treads are made from terrazzo and Kasota marble, and the baluster
Baluster
A baluster is a moulded shaft, square or of lathe-turned form, one of various forms of spindle in woodwork, made of stone or wood and sometimes of metal, standing on a unifying footing, and supporting the coping of a parapet or the handrail of a staircase. Multiplied in this way, they form a...
s and railing are made from Italian travertine and Italian tavernelle clairemarble.

At night, the top of the memorial tower emits steam illuminated by bright orange lights. This effect creates the illusion of a burning pyre
Pyre
A pyre , also known as a funeral pyre, is a structure, usually made of wood, for burning a body as part of a funeral rite...
and can be seen for some distance.

In 1981, the building underwent a major renovation which updated existing systems to modern code specifications.

The grounds were designed by George Kessler
George Kessler
George Edward Kessler was a German American pioneer city planner and landscape architect.Over the course of his forty-one year career, George E. Kessler completed over 200 projects and prepared plans for 26 communities, 26 park and boulevard systems, 49 parks, 46 estates & residents, and 26 schools...
who had rocketed to fame on the strength of his City Beautiful design for the Kansas City park and boulevard system.. The road on the west side of the Memorial is Kessler Road.

The National World War I Museum

The National World War I Museum tells the story of the Great War and related global events from their origins before 1914 through the 1918 Armistice
Armistice
An armistice is a situation in a war where the warring parties agree to stop fighting. It is not necessarily the end of a war, but may be just a cessation of hostilities while an attempt is made to negotiate a lasting peace...
and 1919 Paris Peace Conference
Paris Peace Conference, 1919
The Paris Peace Conference was the meeting of the Allied victors following the end of World War I to set the peace terms for the defeated Central Powers following the armistices of 1918. It took place in Paris in 1919 and involved diplomats from more than 32 countries and nationalities...
. Visitors enter the 32000 square feet (2,972.9 m²) facility across a glass bridge above a field of 9,000 red poppies, each one representing 1,000 WWI combatant deaths.

The museum consists of:

The first part of the museum focuses on the beginning of the Great War pre-U.S. involvement, while the last group of museum galleries focuses on the United States' military and civilian involvement in the war and President Woodrow Wilson
Woodrow Wilson
Thomas Woodrow Wilson was the 28th President of the United States, from 1913 to 1921. A leader of the Progressive Movement, he served as President of Princeton University from 1902 to 1910, and then as the Governor of New Jersey from 1911 to 1913...
's efforts for peace. 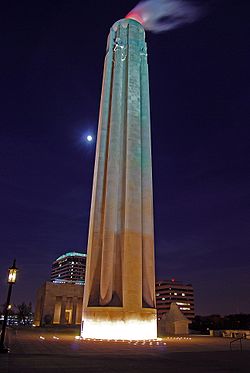