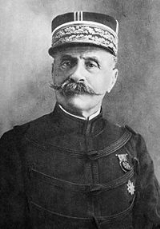 Overview
Ferdinand Foch GCB, OM
Order of Merit
The Order of Merit is a British dynastic order recognising distinguished service in the armed forces, science, art, literature, or for the promotion of culture...
, DSO (2 October 1851 – 20 March 1929) was a French
France
The French Republic , The French Republic , The French Republic , (commonly known as France , is a unitary semi-presidential republic in Western Europe with several overseas territories and islands located on other continents and in the Indian, Pacific, and Atlantic oceans. Metropolitan France...
soldier, war hero, military theorist, and writer credited with possessing "the most original and subtle mind in the French army
French Army
The French Army, officially the Armée de Terre , is the land-based and largest component of the French Armed Forces.As of 2010, the army employs 123,100 regulars, 18,350 part-time reservists and 7,700 Legionnaires. All soldiers are professionals, following the suspension of conscription, voted in...
" in the early 20th century. He served as general in the French army during World War I
World War I
World War I , which was predominantly called the World War or the Great War from its occurrence until 1939, and the First World War or World War I thereafter, was a major war centred in Europe that began on 28 July 1914 and lasted until 11 November 1918...
and was made Marshal of France
Marshal of France
The Marshal of France is a military distinction in contemporary France, not a military rank. It is granted to generals for exceptional achievements...
in its final year: 1918. Shortly after the start of the Spring Offensive
Spring Offensive
The 1918 Spring Offensive or Kaiserschlacht , also known as the Ludendorff Offensive, was a series of German attacks along the Western Front during World War I, beginning on 21 March 1918, which marked the deepest advances by either side since 1914...
, Germany's final attempt to win the war, Foch was chosen as supreme commander of the Allied armies
Allies of World War I
The Entente Powers were the countries at war with the Central Powers during World War I. The members of the Triple Entente were the United Kingdom, France, and the Russian Empire; Italy entered the war on their side in 1915...
, a position that he held until 11 November 1918, when he accepted the German request for an armistice.

Airplanes are interesting toys, but of no military value.

The most powerful weapon on earth is the human soul on fire.

As quoted in The 32d Infantry Division in World War II (1956) by Harold Whittle Blakeley, p. 3

I am conscious of having served England as I served my own country.

As engraved on the statue of Ferdinand Foch on Grosvenor Square, London.

This is not a peace. It is an armistice for 20 years.

None but a coward dares to boast that he has never known fear.

In tactics, action is the governing rule of war.

To inform, and, therefore to reconnoitre, this is the first and constant duty of the advanced guard.