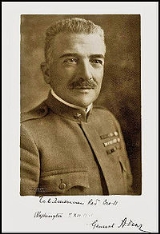 Encyclopedia
Armando Diaz, 1st Duca della Vittoria (December 5, 1861 – February 29, 1928) was an Italian
Italy
Italy , officially the Italian Republic languages]] under the European Charter for Regional or Minority Languages. In each of these, Italy's official name is as follows:;;;;;;;;), is a unitary parliamentary republic in South-Central Europe. To the north it borders France, Switzerland, Austria and...
general and a Marshal of Italy
Marshal of Italy
Marshal of Italy was a rank in the Italian Royal Army . Originally created in 1924 by Italian dictator Benito Mussolini for the purpose of honoring Generals Luigi Cadorna and Armando Diaz, the rank was granted to several other general officers from 1926 to 1943...
.

Born in Naples
Naples
Naples is a city in Southern Italy, situated on the country's west coast by the Gulf of Naples. Lying between two notable volcanic regions, Mount Vesuvius and the Phlegraean Fields, it is the capital of the region of Campania and of the province of Naples...
, Diaz began his military career as a student at the Military Academy of Turin
Turin
Turin is a city and major business and cultural centre in northern Italy, capital of the Piedmont region, located mainly on the left bank of the Po River and surrounded by the Alpine arch. The population of the city proper is 909,193 while the population of the urban area is estimated by Eurostat...
, where he became an artillery
Artillery
Originally applied to any group of infantry primarily armed with projectile weapons, artillery has over time become limited in meaning to refer only to those engines of war that operate by projection of munitions far beyond the range of effect of personal weapons...
officer
Officer (armed forces)
An officer is a member of an armed force or uniformed service who holds a position of authority. Commissioned officers derive authority directly from a sovereign power and, as such, hold a commission charging them with the duties and responsibilities of a specific office or position...
. He was a colonel commanding the 93rd infantry during the Italo-Turkish War
Italo-Turkish War
The Italo-Turkish or Turco-Italian War was fought between the Ottoman Empire and the Kingdom of Italy from September 29, 1911 to October 18, 1912.As a result of this conflict, Italy was awarded the Ottoman provinces of Tripolitania, Fezzan, and...
, and major general in 1914. On the outbreak of the World War I
World War I
World War I , which was predominantly called the World War or the Great War from its occurrence until 1939, and the First World War or World War I thereafter, was a major war centred in Europe that began on 28 July 1914 and lasted until 11 November 1918...
, he was assigned to the high command as head of the unit's operations under General Luigi Cadorna
Luigi Cadorna
Luigi Cadorna GCB was an ItalianField Marshal, most famous for being thechief of staff of the Italian army during the first part of World War I.-Biography:...
. He was promoted to 2-star general in June, 1916, and assumed the command of the 49th division and then the 23rd army corps.

The Battle of Caporetto
Battle of Caporetto
The Battle of Caporetto , took place from 24 October to 19 November 1917, near the town of Kobarid , on the Austro-Italian front of World War I...
, in October 1917, was disastrous to the army, and on November 8, 1917, he was called to succeed Cadorna as chief of general staff. Having recovered what remained of the army, he organized the resistance in 1917 on the Monte Grappa massif and along the Piave River
Piave River
Piave is a river in north Italy. It begins in the Alps and flows southeast for into the Adriatic Sea near the city of Venice....
, which successfully halted the Austrian offensive. In summer of 1918 he oversaw the victory in the Battle of the Piave River
Battle of the Piave River
The Battle of the Piave River , known in Italy as Battaglia del Solstizio , Battaglia di Mezzo Giugno , or Seconda Battaglia del Piave , was a decisive victory for the Italian Army during World War...
and later that year led the Italian troops in the Battle of Vittorio Veneto
Battle of Vittorio Veneto
The Battle of Vittorio Veneto was fought between 24 October and 3 November 1918, near Vittorio Veneto, during the Italian Campaign of World War I...
, which ended the war on the Italian front
Italian Campaign (World War I)
The Italian campaign refers to a series of battles fought between the armies of Austria-Hungary and Italy, along with their allies, in northern Italy between 1915 and 1918. Italy hoped that by joining the countries of the Triple Entente against the Central Powers it would gain Cisalpine Tyrol , the...
. With his famous Bollettino della Vittoria
Bollettino della Vittoria
The Bollettino della Vittoria is the final address to the Army and the Nation issued by the Chief of Staff, General Armando Diaz, at the conclusion of the Battle of Vittorio Veneto ending World War I in Italy.- Italian :...
(Victory Address) he communicated the rout of the Austrian army and victory of the Italians in the war.

On November 1, 1921 Diaz was in Kansas City
Kansas City, Missouri
Kansas City, Missouri is the largest city in the U.S. state of Missouri and is the anchor city of the Kansas City Metropolitan Area, the second largest metropolitan area in Missouri. It encompasses in parts of Jackson, Clay, Cass, and Platte counties...
to attend the groundbreaking ceremony for the Liberty Memorial
Liberty Memorial
The Liberty Memorial, located in Kansas City, Missouri, USA, is a memorial to the fallen soldiers of World War I and houses the The National World War I Museum, as designated by the United States Congress in 2004.. Groundbreaking commenced November 1, 1921, and the city held a site dedication...
that was being constructed there. Also present that day were Lieutenant General Baron Jacques of Belgium
Belgium
Belgium , officially the Kingdom of Belgium, is a federal state in Western Europe. It is a founding member of the European Union and hosts the EU's headquarters, and those of several other major international organisations such as NATO.Belgium is also a member of, or affiliated to, many...
, Admiral David Beatty
David Beatty, 1st Earl Beatty
Admiral of the Fleet David Richard Beatty, 1st Earl Beatty, GCB, OM, GCVO, DSO was an admiral in the Royal Navy...
of Great Britain
Great Britain
Great Britain or Britain is an island situated to the northwest of Continental Europe. It is the ninth largest island in the world, and the largest European island, as well as the largest of the British Isles...
, Marshal Ferdinand Foch
Ferdinand Foch
Ferdinand Foch , GCB, OM, DSO was a French soldier, war hero, military theorist, and writer credited with possessing "the most original and subtle mind in the French army" in the early 20th century. He served as general in the French army during World War I and was made Marshal of France in its...
of France
France
The French Republic , The French Republic , The French Republic , (commonly known as France , is a unitary semi-presidential republic in Western Europe with several overseas territories and islands located on other continents and in the Indian, Pacific, and Atlantic oceans. Metropolitan France...
, and General John J. Pershing
John J. Pershing
John Joseph "Black Jack" Pershing, GCB , was a general officer in the United States Army who led the American Expeditionary Forces in World War I...
of the United States
United States
The United States of America is a federal constitutional republic comprising fifty states and a federal district...
. One of the main speakers was Vice President Calvin Coolidge
Calvin Coolidge
John Calvin Coolidge, Jr. was the 30th President of the United States . A Republican lawyer from Vermont, Coolidge worked his way up the ladder of Massachusetts state politics, eventually becoming governor of that state...
of the United States. In 1935 bas-reliefs of Jacques, Foch, Diaz, and Pershing by sculptor Walker Hancock
Walker Hancock
Walker Kirtland Hancock was a 20th-century American sculptor and teacher. He created notable monumental sculptures, including the Pennsylvania Railroad World War II Memorial at 30th Street Station in Philadelphia, Pennsylvania...
were added to the memorial.

After the war Armando Diaz was appointed as a senator. In 1921 he was ennobled by King Victor Emmanuel III
Victor Emmanuel III of Italy
Victor Emmanuel III was a member of the House of Savoy and King of Italy . In addition, he claimed the crowns of Ethiopia and Albania and claimed the titles Emperor of Ethiopia and King of Albania , which were unrecognised by the Great Powers...
and given the victory title
Victory title
A victory title is an honorific title adopted by a successful military commander to commemorate his defeat of an enemy nation. This practice was first used by Ancient Rome and is still most commonly associated with the Romans, but it has also been adopted as a practice by many modern empires,...
of 1st Duca della Vittoria ("Duke of Victory"). Benito Mussolini
Benito Mussolini
Benito Amilcare Andrea Mussolini was an Italian politician who led the National Fascist Party and is credited with being one of the key figures in the creation of Fascism....
named him Minister of War, and he was promoted to Field Marshal
Field Marshal
Field Marshal is a military rank. Traditionally, it is the highest military rank in an army.-Etymology:The origin of the rank of field marshal dates to the early Middle Ages, originally meaning the keeper of the king's horses , from the time of the early Frankish kings.-Usage and hierarchical...
. Upon retirement, in 1924, he was given the honor of Marshal of Italy
Marshal of Italy
Marshal of Italy was a rank in the Italian Royal Army . Originally created in 1924 by Italian dictator Benito Mussolini for the purpose of honoring Generals Luigi Cadorna and Armando Diaz, the rank was granted to several other general officers from 1926 to 1943...
(Maresciallo d'Italia). Diaz died in Rome in 1928; he was buried in the church of Santa Maria degli Angeli e dei Martiri
Santa Maria degli Angeli e dei Martiri
The Basilica of St. Mary of the Angels and the Martyrs is a titular basilica church in Rome, built inside the frigidarium of the Baths of Diocletian. The Cardinal priest of the is William Henry Keeler.- The basilica :...
, next to admiral Paolo Thaon di Revel
Paolo Thaon di Revel
Paolo Emilio Thaon di Revel, 1st Duca del Mare was an Italian admiral of the Royal Italian Navy during World War I and later a politician....
.