In the philosophy
Philosophy
Philosophy is the study of general and fundamental problems, such as those connected with existence, knowledge, values, reason, mind, and language. Philosophy is distinguished from other ways of addressing such problems by its critical, generally systematic approach and its reliance on rational...
, art
Art
Art is the product or process of deliberately arranging items in a way that influences and affects one or more of the senses, emotions, and intellect....
, and culture
Culture
Culture is a term that has many different inter-related meanings. For example, in 1952, Alfred Kroeber and Clyde Kluckhohn compiled a list of 164 definitions of "culture" in Culture: A Critical Review of Concepts and Definitions...
of German
German language
German is a West Germanic language, related to and classified alongside English and Dutch. With an estimated 90 – 98 million native speakers, German is one of the world's major languages and is the most widely-spoken first language in the European Union....
-speaking countries, German Romanticism was the dominant movement of the late 18th and early 19th centuries. German Romanticism developed relatively late compared to its English
English language
English is a West Germanic language that arose in the Anglo-Saxon kingdoms of England and spread into what was to become south-east Scotland under the influence of the Anglian medieval kingdom of Northumbria...
counterpart, coinciding in its early years with the movement known as German Classicism or Weimar Classicism
Weimar Classicism
Weimar Classicism is a cultural and literary movement of Europe. Followers attempted to establish a new humanism by synthesizing Romantic, classical and Enlightenment ideas...
. In contrast to the seriousness of English Romanticism, the German variety is notable for valuing humor and wit as well as beauty.

The early German romantics tried to create a new synthesis of art, philosophy, and science, looking to the Middle Ages
Middle Ages
The Middle Ages is a periodization of European history from the 5th century to the 15th century. The Middle Ages follows the fall of the Western Roman Empire in 476 and precedes the Early Modern Era. It is the middle period of a three-period division of Western history: Classic, Medieval and Modern...
as a simpler, more integrated period. As time went on, however, they became increasingly aware of the tenuousness of the unity they were seeking. Later German Romanticism emphasized the tension between the everyday world and the seemingly irrational and supernatural projections of creative genius. Heinrich Heine
Heinrich Heine
Christian Johann Heinrich Heine was one of the most significant German poets of the 19th century. He was also a journalist, essayist, and literary critic. He is best known outside Germany for his early lyric poetry, which was set to music in the form of Lieder by composers such as Robert Schumann...
in particular criticized the tendency of the early romantics to look to the medieval past for a model of unity in art and society.

Key figures of German romanticism include: 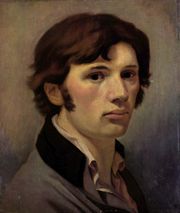