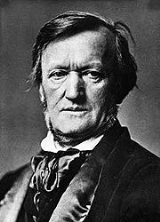 Overview
Wilhelm Richard Wagner (icon; ˈʁiçaʁt ˈvaːɡnɐ; 22 May 1813 13 February 1883) was a German
Germans
The Germans are a Germanic ethnic group native to Central Europe. The English term Germans has referred to the German-speaking population of the Holy Roman Empire since the Late Middle Ages....
composer
Composer
A composer is a person who creates music, either by musical notation or oral tradition, for interpretation and performance, or through direct manipulation of sonic material through electronic media...
, conductor
Conducting
Conducting is the art of directing a musical performance by way of visible gestures. The primary duties of the conductor are to unify performers, set the tempo, execute clear preparations and beats, and to listen critically and shape the sound of the ensemble...
, theatre director, philosopher
Philosophy
Philosophy is the study of general and fundamental problems, such as those connected with existence, knowledge, values, reason, mind, and language. Philosophy is distinguished from other ways of addressing such problems by its critical, generally systematic approach and its reliance on rational...
, music theorist
Music theory
Music theory is the study of how music works. It examines the language and notation of music. It seeks to identify patterns and structures in composers' techniques across or within genres, styles, or historical periods...
, poet
Poet
A poet is a person who writes poetry. A poet's work can be literal, meaning that his work is derived from a specific event, or metaphorical, meaning that his work can take on many meanings and forms. Poets have existed since antiquity, in nearly all languages, and have produced works that vary...
, essayist and writer
Writer
A writer is a person who produces literature, such as novels, short stories, plays, screenplays, poetry, or other literary art. Skilled writers are able to use language to portray ideas and images....
primarily known for his opera
Opera
Opera is an art form in which singers and musicians perform a dramatic work combining text and musical score, usually in a theatrical setting. Opera incorporates many of the elements of spoken theatre, such as acting, scenery, and costumes and sometimes includes dance...
s (or "music dramas", as they were later called). Wagner's compositions, particularly those of his later period, are notable for their complex texture
Texture (music)
In music, texture is the way the melodic, rhythmic, and harmonic materials are combined in a composition , thus determining the overall quality of sound of a piece...
, rich harmonies
Harmony
In music, harmony is the use of simultaneous pitches , or chords. The study of harmony involves chords and their construction and chord progressions and the principles of connection that govern them. Harmony is often said to refer to the "vertical" aspect of music, as distinguished from melodic...
and orchestration
Orchestration
Orchestration is the study or practice of writing music for an orchestra or of adapting for orchestra music composed for another medium...
, and the elaborate use of leitmotif
Leitmotif
A leitmotif , sometimes written leit-motif, is a musical term , referring to a recurring theme, associated with a particular person, place, or idea. It is closely related to the musical idea of idée fixe...
s: musical themes associated with individual characters, places, ideas or plot elements.

Music has taken a bad turn; these young people have no idea how to write a melody, they just give us shavings, which they dress up to look like a lion's mane and shake at us... It's as if they avoid melodies, for fear of having perhaps stolen them from someone else.

It should not be presumed that these people (the Jews), who are so separated from us by their religion, have any right to make our laws. But why blame the Jews? It is we who lack all feeling for our own identity, all sense of honour.

I am writing Parsifal only for my wife -- if I had to depend on the German spirit, I should have nothing more to say.

Oh, I hate the thought of all those costumes and grease paint! When I think that characters like Kundry will now have to be dressed up, those dreadful artists' balls immediately spring into my mind. Having created the invisible orchestra, I now feel like inventing the invisible theatre!

Certain things in Mozart will and can never be excelled.

It is necessary for us to explain the involuntary repugnance we possess for the nature and personality of the Jews....

The Jews have never produced a true poet. Heinrich Heine reached the point where he duped himself into a poet, and was rewarded by his versified lies being set to music by our own composers. He was the conscience of Judaism, just as Judaism is the evil conscience of our modern civilization.

I believe in God, Mozart, and Beethoven.

"The Life's End of a German Musician in Paris", a short story written for the Gazette Musicale

I hate this fast growing tendency to chain men to machines in big factories and deprive them of all joy in their efforts - the plan will lead to cheap men and cheap products.