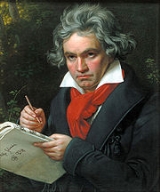 Overview
Ludwig van Beethoven (baptized 17 December 1770 – 26 March 1827) was a German
Germans
The Germans are a Germanic ethnic group native to Central Europe. The English term Germans has referred to the German-speaking population of the Holy Roman Empire since the Late Middle Ages....
composer
Composer
A composer is a person who creates music, either by musical notation or oral tradition, for interpretation and performance, or through direct manipulation of sonic material through electronic media...
and pianist
Pianist
A pianist is a musician who plays the piano. A professional pianist can perform solo pieces, play with an ensemble or orchestra, or accompany one or more singers, solo instrumentalists, or other performers.-Choice of genres:...
. A crucial figure in the transition between the Classical
Classical period (music)
The dates of the Classical Period in Western music are generally accepted as being between about 1750 and 1830. However, the term classical music is used colloquially to describe a variety of Western musical styles from the ninth century to the present, and especially from the sixteenth or...
and Romantic
Romantic music
Romantic music or music in the Romantic Period is a musicological and artistic term referring to a particular period, theory, compositional practice, and canon in Western music history, from 1810 to 1900....
eras in Western art music
Classical music
Classical music is the art music produced in, or rooted in, the traditions of Western liturgical and secular music, encompassing a broad period from roughly the 11th century to present times...
, he remains one of the most famous and influential composers of all time.

Born in Bonn
Bonn
Bonn is the 19th largest city in Germany. Located in the Cologne/Bonn Region, about 25 kilometres south of Cologne on the river Rhine in the State of North Rhine-Westphalia, it was the capital of West Germany from 1949 to 1990 and the official seat of government of united Germany from 1990 to 1999....
, then the capital of the Electorate of Cologne and part of the Holy Roman Empire
Holy Roman Empire
The Holy Roman Empire was a realm that existed from 962 to 1806 in Central Europe.It was ruled by the Holy Roman Emperor. Its character changed during the Middle Ages and the Early Modern period, when the power of the emperor gradually weakened in favour of the princes...
, Beethoven moved to Vienna
Vienna
Vienna is the capital and largest city of the Republic of Austria and one of the nine states of Austria. Vienna is Austria's primary city, with a population of about 1.723 million , and is by far the largest city in Austria, as well as its cultural, economic, and political centre...
in his early 20s, studying with Joseph Haydn
Joseph Haydn
Franz Joseph Haydn , known as Joseph Haydn , was an Austrian composer, one of the most prolific and prominent composers of the Classical period. He is often called the "Father of the Symphony" and "Father of the String Quartet" because of his important contributions to these forms...
and quickly gaining a reputation as a virtuoso pianist.

Does anybody have sheet music for Concerto No.5 in E flat major? ("love song" section mainly)
More

In what ways did Beethoven establish his career in Vienna?

How did Beethoven support himself financially?
More

There ought to be but one large art warehouse in the world, to which the artist could carry his art-works, and from which he could carry away whatever he needed. As it is, one must be half a tradesman.

Art! Who comprehends her? With whom can one consult concerning this great goddess?

The world is a king, and like a king, desires flattery in return for favor; but true art is selfish and perverse — it will not submit to the mold of flattery.

Plaudite, amici, comedia finita est. (Applaud, my friends, the comedy is over.)

Ich werde im Himmel hören! (I will hear in heaven!)

Said on his deathbed, 1827, as cited from the book Last Words.

The day-to-day exhausted me!

Must it be? It must be.
More
x