Encyclopedia
Joseph Anton Koch was an Austria
Austria
Austria , officially the Republic of Austria , is a landlocked country of roughly 8.4 million people in Central Europe. It is bordered by the Czech Republic and Germany to the north, Slovakia and Hungary to the east, Slovenia and Italy to the south, and Switzerland and Liechtenstein to the...
n painter
Painting
Painting is the practice of applying paint, pigment, color or other medium to a surface . The application of the medium is commonly applied to the base with a brush but other objects can be used. In art, the term painting describes both the act and the result of the action. However, painting is...
of the German Romantic
German Romanticism
For the general context, see Romanticism.In the philosophy, art, and culture of German-speaking countries, German Romanticism was the dominant movement of the late 18th and early 19th centuries. German Romanticism developed relatively late compared to its English counterpart, coinciding in its...
movement.

The Tyrolese
County of Tyrol
The County of Tyrol, Princely County from 1504, was a State of the Holy Roman Empire, from 1814 a province of the Austrian Empire and from 1867 a Cisleithanian crown land of Austria-Hungary...
painter was born in Elbigenalp
Elbigenalp
Elbigenalp is a municipality in the Austrian district of Reutte, Tyrol....
. He started life tending cattle. Through the recommendation of Bishop Umgelder (1785), he received academic training in the Karlsschule Stuttgart
Karlsschule Stuttgart
Hohe Karlsschule was the strict military academy founded by Karl Eugen, Duke of Württemberg in Stuttgart, Germany.Politically the duke was quite unimportant and with this school he wanted to enhance his prestige. In 1770, it was moved to Castle Solitude, and in 1775 into the city...
, a strict military academy. In 1791, he ran away, and traveled through France and Switzerland. He arrived in Rome
Rome
Rome is the capital of Italy and the country's largest and most populated city and comune, with over 2.7 million residents in . The city is located in the central-western portion of the Italian Peninsula, on the Tiber River within the Lazio region of Italy.Rome's history spans two and a half...
in 1795. Koch was close to the painter Asmus Jacob Carstens
Asmus Jacob Carstens
Asmus Jacob Carstens was a Danish-German painter.-Biography:He was born in Sanct Jürgen near Schleswig to a miller. He had a youthful passion for painting, but was placed in a mercantile house...
and carried on Carstens' “heroic” art, at first in a literal manner. He etched the pages of Carstens' Les Argonautes, selon Pindar, Orphée et Apollonius de Rhode (Rome, 1799). 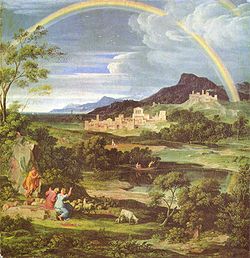 He returned to Rome, and became a conspicuous figure in the German artists' colony there. He painted, among other works, the four fresco
Fresco
Fresco is any of several related mural painting types, executed on plaster on walls or ceilings. The word fresco comes from the Greek word affresca which derives from the Latin word for "fresh". Frescoes first developed in the ancient world and continued to be popular through the Renaissance...
es in the Dante Room of the Villa Massimi (1824-29). His presence and personality had considerable influence among the younger generation in the art life of Rome, and his new approach had a wide influence on German landscape painters who visited Rome
Rome
Rome is the capital of Italy and the country's largest and most populated city and comune, with over 2.7 million residents in . The city is located in the central-western portion of the Italian Peninsula, on the Tiber River within the Lazio region of Italy.Rome's history spans two and a half...
.
He wrote Moderne Kunstchronik oder die rumfordische Suppe gekocht und geschrieben von J. A. Koch (Stuttgart, 1834) which was directed humorously against unjustifiable criticism and false connoisseurship. His last years were spent in great poverty.


He etched 20 Italian
Italy
Italy , officially the Italian Republic languages]] under the European Charter for Regional or Minority Languages. In each of these, Italy's official name is as follows:;;;;;;;;), is a unitary parliamentary republic in South-Central Europe. To the north it borders France, Switzerland, Austria and...
landscapes and a large sheet representing “The Oath of the French at Millesimo”; 14 pages after Dante
DANTE
Delivery of Advanced Network Technology to Europe is a not-for-profit organisation that plans, builds and operates the international networks that interconnect the various national research and education networks in Europe and surrounding regions...
, adding later another 30 pages (published Vicenza, 1904), and 36 pages after Ossian
Ossian
Ossian is the narrator and supposed author of a cycle of poems which the Scottish poet James Macpherson claimed to have translated from ancient sources in the Scots Gaelic. He is based on Oisín, son of Finn or Fionn mac Cumhaill, anglicised to Finn McCool, a character from Irish mythology...
. He contributed American landscape scenes to the works of Alexander von Humboldt
Alexander von Humboldt
Friedrich Wilhelm Heinrich Alexander Freiherr von Humboldt was a German naturalist and explorer, and the younger brother of the Prussian minister, philosopher and linguist Wilhelm von Humboldt...
(1805).