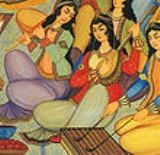 Overview
Culture is a term that has many different inter-related meanings. For example, in 1952, Alfred Kroeber and Clyde Kluckhohn
Clyde Kluckhohn
Clyde Kluckhohn , was an American anthropologist and social theorist, best known for his long-term ethnographic work among the Navajo and his contributions to the development of theory of culture within American anthropology.-Early life and education:...
compiled a list of 164 definitions of "culture" in Culture: A Critical Review of Concepts and Definitions. However, the word "culture" is most commonly used in three basic senses:
When the concept first emerged in eighteenth- and nineteenth-century Europe, it connoted a process of cultivation or improvement, as in agriculture
Agriculture
Agriculture is the cultivation of animals, plants, fungi and other life forms for food, fiber, and other products used to sustain life. Agriculture was the key implement in the rise of sedentary human civilization, whereby farming of domesticated species created food surpluses that nurtured the...
or horticulture
Horticulture
Horticulture is the industry and science of plant cultivation including the process of preparing soil for the planting of seeds, tubers, or cuttings. Horticulturists work and conduct research in the disciplines of plant propagation and cultivation, crop production, plant breeding and genetic...
.

What is cultural conflict and personality?
More

Each form of the sacrosanct was regarded by members of the culture which gave rise to it as a revelation of the Truth.

Our art culture makes no attempt to search the past for precedents, but transforms the entire past into a sequence of provisional responses to a problem that remains intact.

Culture would seem … first and foremost, to be the knowledge of what makes man something other than and accident of the universe be it by deepening his harmony with the world, or by the lucid consciousness of his revolt from it. … Culture is the sum of all the forms of art, of love and of thought, which, in the course of centuries, have enabled man to be less enslaved.

One ought not to hoard culture. It should be adapted and infused into society as a leaven. Liberality of culture does not mean illiberality of its benefits.