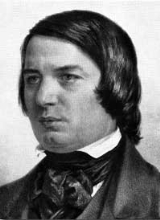 Overview
Robert Schumann, sometimes known as Robert Alexander Schumann, (8 June 181029 July 1856) was a German composer, aesthete and influential music critic. He is regarded as one of the greatest and most representative composers of the Romantic
Romantic music
Romantic music or music in the Romantic Period is a musicological and artistic term referring to a particular period, theory, compositional practice, and canon in Western music history, from 1810 to 1900....
era.
Schumann left the study of law to return to music, intending to pursue a career as a virtuoso
Virtuoso
A virtuoso is an individual who possesses outstanding technical ability in the fine arts, at singing or playing a musical instrument. The plural form is either virtuosi or the Anglicisation, virtuosos, and the feminine form sometimes used is virtuosa...
pianist. He had been assured by his teacher Friedrich Wieck
Friedrich Wieck
Johann Gottlob Friedrich Wieck was a noted German piano teacher, voice teacher, owner of a piano store, and music reviewer. He is remembered as the teacher of his daughter, Clara, a child prodigy who was doing international concert tours by age eleven and who later married Robert Schumann...
that he could become the finest pianist in Europe, but a hand injury ended this dream.

Where was he born? Where did he die?

When and where did he die?
More

In order to compose, all you need do is remember a tune that nobody else has thought of.

The talent works, the genius creates.

Hats off gentlemen; a genius.

Comment after hearing an early set of variations by Chopin.
More
x