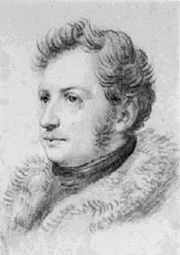 In 1806-1807 Friedrich served as a soldier. In 1810 he traveled with his elder brother Rudolph
Rudolph Schadow
Rudolph Schadow was a German sculptor.Born in Rome, he had his father at Berlin for his first master....
to Rome where he became one of the leaders among painters of the Nazarene movement
Nazarene movement
The name Nazarene was adopted by a group of early 19th century German Romantic painters who aimed to revive honesty and spirituality in Christian art...
. Following the example of Johann Friedrich Overbeck
Johann Friedrich Overbeck
Johann Friedrich Overbeck , was a German painter and member of the Nazarene movement. He also made four etchings.-Biography:...
and others, he joined the Roman Catholic Church
Roman Catholic Church
The Catholic Church, also known as the Roman Catholic Church, is the world's largest Christian church, with over a billion members. Led by the Pope, it defines its mission as spreading the gospel of Jesus Christ, administering the sacraments and exercising charity...
, and held that an artist must believe and live out the truths he essays to paint. The sequel showed that Schadow was qualified to shine more as a teacher and mentor than as a painter. As an author, he is best known for his lecture, Ueber den Einfluss des Christentums auf die bildende Kunst (About The Influence of Christianity On The Visual Arts) (Düsseldorf, 1843), and the biographical sketches, Der moderne Vasari (Berlin, 1854).

In Rome, Schadow was given one of his first major commissions when the Prussian Consul-General, General Jakob Salomon Bartholdy
Jakob Salomon Bartholdy
Jakob Salomon Bartholdy was a Prussian diplomat, born Jakob Salomon in Berlin of Jewish parentage, and educated at the University of Halle...
, befriended the young painter, and asked him and three young compatriots (Cornelius
Peter von Cornelius
Peter von Cornelius was a German painter.Cornelius was born in Düsseldorf.His father, who was inspector of the Düsseldorf gallery, died in 1799, and the young Cornelius was stimulated to extraordinary exertions...
, Overbeck
Johann Friedrich Overbeck
Johann Friedrich Overbeck , was a German painter and member of the Nazarene movement. He also made four etchings.-Biography:...
and Veit
Philipp Veit
Philipp Veit was a German Romantic painter. To Veit is due the credit of having been the first to revive the almost forgotten technique of fresco painting.- Biography :Veit was born in Berlin, Prussia...
) to decorate in fresco a room in his house on the Pincian Hill
Pincian Hill
The Pincian Hill is a hill in the northeast quadrant of the historical center of Rome. The hill lies to the north of the Quirinal, overlooking the Campus Martius...
. The overall theme selected was the story of Joseph and his brethren, and two scenes, the Bloody Coat and Joseph in Prison, were conferred on Schadow. In 1819, Schadow was appointed professor in the prestigious Berlin Academy of the Arts
Akademie der Künste
The Akademie der Künste, Berlin is an arts institution in Berlin, Germany. It was founded in 1696 by Elector Frederick III of Brandenburg as the Prussian Academy of Arts, an academic institution where members could meet and discuss and share ideas...
, and his ability and thorough training gained many devoted disciples.

It was during this period that Schadow developed his paintings for churches. In 1826, Professor Schadow was made director of the Düsseldorf Academy of the Arts, which he reoriented towards the production of Christian art, though he began a major dispute with one of its professors, Heinrich Christoph Kolbe
Heinrich Christoph Kolbe
Heinrich Christoph Kolbe was a German painter.-Life:Kolbe was born and died in Düsseldorf. After his education at the 'old' Kunstakademie Düsseldorf and then went to Paris for ten years to study. He was part of the circle of Friedrich Schlegel and worked on the review "Europa". He later worked in...
, ending in the latter leaving the Academy in 1832. In 1837, Schadow selected, at request, those of his students best qualified to decorate the chapel of St Apollinaris on the Rhine with frescoes. When finished, they were acclaimed as the fullest and purest manifestation of the spiritual side of the Düsseldorf school
Düsseldorf School
The Düsseldorf school of painting refers to a group of painters who taught or studied at the Düsseldorf Academy in the 1830s and 1840s, when the Academy was directed by the painter Wilhelm von Schadow...
. One of his famous students, Heinrich Mucke
Heinrich Mucke
Heinrich Karl Anton Mücke was a prominent Realist painter known for his liturgical and genre paintings as well as frescoes, which still adorn some of Germany's ancient castles and cathedrals. His paintings are hung today in Germany's leading museums, including the National Gallery Berlin, Breslau...
, carried on the liturgical art with emphasis both in painting and fresco
Fresco
Fresco is any of several related mural painting types, executed on plaster on walls or ceilings. The word fresco comes from the Greek word affresca which derives from the Latin word for "fresh". Frescoes first developed in the ancient world and continued to be popular through the Renaissance...
es. The painting of the "Wise and Foolish Virgins," considered one of his masterworks, was commissioned in 1842. Now in the Städel Museum, this large and important picture, while carefully considered and rendered, it however lacks power of some of his other works.

The Düsseldorf School
Düsseldorf School
The Düsseldorf school of painting refers to a group of painters who taught or studied at the Düsseldorf Academy in the 1830s and 1840s, when the Academy was directed by the painter Wilhelm von Schadow...
that Schadow directed became internationally renowned, attracting such American painters as George Caleb Bingham
George Caleb Bingham
George Caleb Bingham was an American artist whose paintings of American life in the frontier lands along the Missouri River exemplify the Luminist style. Left to languish in obscurity, Bingham's work was rediscovered in the 1930s...
, Eastman Johnson
Eastman Johnson
Eastman Johnson was an American painter, and Co-Founder of the Metropolitan Museum of Art, New York City, with his name inscribed at its entrance...
, Worthington Whittredge
Worthington Whittredge
Thomas Worthington Whittredge was an American artist of the Hudson River School. Whittredge was a highly regarded artist of his time, and was friends with several leading Hudson River School artists including Albert Bierstadt and Sanford Robinson Gifford...
, Richard Caton Woodville
Richard Caton Woodville
Richard Caton Woodville was an English artist and illustrator, who is best known for being one of the most prolific and effective painters of battle scenes in the late 19th and early 20th centuries.-Biography:...
, William Stanley Haseltine
William Stanley Haseltine
William Stanley Haseltine was an American painter and draftsman who was associated with the Düsseldorf school of painting, the Hudson River School and Luminism.-Early life and education:...
, James M. Hart
James McDougal Hart
James McDougal Hart , was a Scottish-born American landscape and cattle painter of the Hudson River School. His older brother, William Hart, was also a Hudson River School artist, and the two painted similar subjects....
, and William Morris Hunt
William Morris Hunt
William Morris Hunt , American painter, was born at Brattleboro, Vermont to Jane Maria Hunt and Hon. Jonathan Hunt, who raised one of the preeminent families in American art...
and producing the German emigre Emmanuel Leutze.