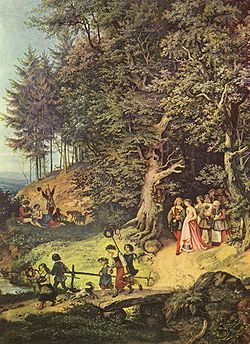 Adrian Ludwig Richter a German
Germany
Germany , officially the Federal Republic of Germany , is a federal parliamentary republic in Europe. The country consists of 16 states while the capital and largest city is Berlin. Germany covers an area of 357,021 km2 and has a largely temperate seasonal climate...
painter
Painting
Painting is the practice of applying paint, pigment, color or other medium to a surface . The application of the medium is commonly applied to the base with a brush but other objects can be used. In art, the term painting describes both the act and the result of the action. However, painting is...
and etcher, was born at Dresden
Dresden
Dresden is the capital city of the Free State of Saxony in Germany. It is situated in a valley on the River Elbe, near the Czech border. The Dresden conurbation is part of the Saxon Triangle metropolitan area....
, the son of the engraver Karl August Richter, from whom he received his training; but he was strongly influenced by Erhard and Chodowiecki
Daniel Chodowiecki
Daniel Niklaus Chodowiecki was a Polish - German painter and printmaker with Huguenot ancestry, who is most famous as an etcher...
.

He was the most popular, and in many ways the most typical German illustrator of the middle of the 19th century. His work is as typically German and homely as are the fairy-tales of Grimm
Grimm
-Media:* Brothers Grimm , the third album by Australian hip hop singer Drapht-Fiction:* The Brothers Grimm, German academics, linguists, cultural researchers, and authors...
. Richter visited Italy
Italy
Italy , officially the Italian Republic languages]] under the European Charter for Regional or Minority Languages. In each of these, Italy's official name is as follows:;;;;;;;;), is a unitary parliamentary republic in South-Central Europe. To the north it borders France, Switzerland, Austria and...
from 1823–1826, and his Thunderstorm in the Sabine Mountains at the Staedel Museum in Frankfurt is one of the rare Italian subjects from his brush. In 1828 he worked as designer for the Meissen
Meissen
Meissen is a town of approximately 30,000 about northwest of Dresden on both banks of the Elbe river in the Free State of Saxony, in eastern Germany. Meissen is the home of Meissen porcelain, the Albrechtsburg castle, the Gothic Meissen Cathedral and the Meissen Frauenkirche...
factory, and in 1841 he became professor and head of the landscape atelier at the Dresden Academy, (now Hochschule für Bildende Künste Dresden
Hochschule für Bildende Künste Dresden
The Dresden Academy of Fine Arts , often abbreviated HfBK Dresden or simply HfBK, is a vocational university of visual arts located in Dresden, Germany...
). The Dresden Gallery owns one of his best and most characteristic paintings: Bridal Procession in a Spring Landscape. An eye disease put a stop to the practice of his art in 1874; he was pensioned in 1877, and died at Loschwitz
Loschwitz
Loschwitz is a borough of Dresden, Germany, incorporated in 1921. It consists of ten quarters :Loschwitz is a villa quarter located at the slopes north of the Elbe river...
, near Dresden.

The interest of his uneventful life centres within the circle of his art. As a painter Richter aimed at a thorough blending of the figure element with the landscape and may be judged by the following examples: "Harvest Procession in the Campagna" (1833) and three others in the Leipzig Museum: "Ferry at the Schreckenstein" (1836) and "Bridal Procession in Springtime" (1847), in the Dresden Gallery; "View of the Riesengebirge" (1839), in the National Gallery, Berlin. One of his most notable proteges was Hermann Lungkwitz
Hermann Lungkwitz
Hermann Lungkwitz was a 19th Century German-born Texas romantic landscape artist and photographer whose work became the first pictoral record of the Texas Hill Country.-Early life:...
.

Among his 240 etching
Etching
Etching is the process of using strong acid or mordant to cut into the unprotected parts of a metal surface to create a design in intaglio in the metal...
s are about 140 views in Saxony, others of Salzburg
Salzburg
-Population development:In 1935, the population significantly increased when Salzburg absorbed adjacent municipalities. After World War II, numerous refugees found a new home in the city. New residential space was created for American soldiers of the postwar Occupation, and could be used for...
, Rome
Rome
Rome is the capital of Italy and the country's largest and most populated city and comune, with over 2.7 million residents in . The city is located in the central-western portion of the Italian Peninsula, on the Tiber River within the Lazio region of Italy.Rome's history spans two and a half...
, and the Campagna. His individuality is most completely revealed in his 3000 or more drawings for woodcut
Woodcut
Woodcut—occasionally known as xylography—is a relief printing artistic technique in printmaking in which an image is carved into the surface of a block of wood, with the printing parts remaining level with the surface while the non-printing parts are removed, typically with gouges...
s, of which art he was one of the most influential revivers. Of special charm are his illustrations for The Vicar of Wakefield (1841), for Musäus
Johann Karl August Musaus
Johann Karl August Musäus was a German author from Jena. He studied theology at the university of Jena, and would have become the pastor of a parish but for the resistance of some peasants, who objected that he had been known to dance.From 1760–62 Musäus published in three volumes his first...
' Volksmärchen (1842) and for numerous other fairy tales, for the Goethe Album (1855), and for Schiller
Friedrich Schiller
Johann Christoph Friedrich von Schiller was a German poet, philosopher, historian, and playwright. During the last seventeen years of his life , Schiller struck up a productive, if complicated, friendship with already famous and influential Johann Wolfgang von Goethe...
's Glocke (1857), and those cyclical publications which reveal the most brilliant side of the artist's inexhaustible fancy, such as Beschauliches und Erbauliches (1851); Kinderleben (1852); Fürs Haus (1858–1861); Der gute Hirt (1860); Unser täglich Brot (1866); Bilder und Vignetten (1874).