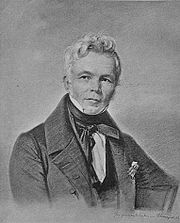 Karl Friedrich Schinkel (13 March 1781 – 9 October 1841) was a Prussia
Prussia
Prussia was a German kingdom and historic state originating out of the Duchy of Prussia and the Margraviate of Brandenburg. For centuries, the House of Hohenzollern ruled Prussia, successfully expanding its size by way of an unusually well-organized and effective army. Prussia shaped the history...
n architect, city planner
Urban planning
Urban planning incorporates areas such as economics, design, ecology, sociology, geography, law, political science, and statistics to guide and ensure the orderly development of settlements and communities....
, and painter who also designed furniture and stage sets. Schinkel was one of the most prominent architects of Germany and designed both neoclassical
Neoclassicism
Neoclassicism is the name given to Western movements in the decorative and visual arts, literature, theatre, music, and architecture that draw inspiration from the "classical" art and culture of Ancient Greece or Ancient Rome...
and neogothic
Gothic Revival architecture
The Gothic Revival is an architectural movement that began in the 1740s in England...
buildings.

Schinkel was born in Neuruppin
Neuruppin
Neuruppin is a town in Brandenburg, Germany. Located on the shore of Ruppiner See , it is the capital of the district of Ostprignitz-Ruppin. Population: 32,800 .-Overview:...
, Margraviate of Brandenburg
Margraviate of Brandenburg
The Margraviate of Brandenburg was a major principality of the Holy Roman Empire from 1157 to 1806. Also known as the March of Brandenburg , it played a pivotal role in the history of Germany and Central Europe....
. Aged six, his father died in Neuruppin's disastrous fire. He became a student of architect Friedrich Gilly
Friedrich Gilly
Friedrich David Gilly was a German architect and the son of the architect David Gilly.Born in Altdamm , Pomerania , Gilly was known as a prodigy and the teacher of the young Karl Friedrich Schinkel. In 1788 he enrolled at the Akademie der Bildenden Künste in Berlin...
(1772–1800) (the two became close friends) and his father, David Gilly, in Berlin
Berlin
Berlin is the capital city of Germany and is one of the 16 states of Germany. With a population of 3.45 million people, Berlin is Germany's largest city. It is the second most populous city proper and the seventh most populous urban area in the European Union...
. After returning to Berlin from his first trip to Italy in 1805, he started to earn his living as a painter. Working for the stage he created in 1816 a star-spangled backdrop for the appearance of the "Königin der Nacht" in Wolfgang Amadeus Mozart
Wolfgang Amadeus Mozart
Wolfgang Amadeus Mozart , baptismal name Johannes Chrysostomus Wolfgangus Theophilus Mozart , was a prolific and influential composer of the Classical era. He composed over 600 works, many acknowledged as pinnacles of symphonic, concertante, chamber, piano, operatic, and choral music...
's opera The Magic Flute
The Magic Flute
The Magic Flute is an opera in two acts composed in 1791 by Wolfgang Amadeus Mozart to a German libretto by Emanuel Schikaneder. The work is in the form of a Singspiel, a popular form that included both singing and spoken dialogue....
, which is even quoted in modern productions of this perennial piece. When he saw Caspar David Friedrich
Caspar David Friedrich
Caspar David Friedrich was a 19th-century German Romantic landscape painter, generally considered the most important German artist of his generation. He is best known for his mid-period allegorical landscapes which typically feature contemplative figures silhouetted against night skies, morning...
's painting Wanderer above the Sea of Fog
Wanderer above the Sea of Fog
Wanderer above the Sea of Fog is an oil painting composed in 1818 by the German Romantic artist Caspar David Friedrich. It currently resides in the Kunsthalle Hamburg in Hamburg, Germany.-Description:...
at the 1810 Berlin art exhibition he decided that he would never reach such mastery of painting and turned to architecture. After Napoleon's defeat, Schinkel oversaw the Prussian Building Commission. In this position, he was not only responsible for reshaping the still relatively unspectacular city of Berlin into a representative capital for Prussia, but also oversaw projects in the expanded Prussian territories from the Rhineland in the west to Königsberg
Königsberg
Königsberg was the capital of East Prussia from the Late Middle Ages until 1945 as well as the northernmost and easternmost German city with 286,666 inhabitants . Due to the multicultural society in and around the city, there are several local names for it...
in the east.

Schinkel's style, in his most productive period, is defined by a turn to Greek rather than Imperial Roman architecture, an attempt to turn away from the style that was linked to the recent French occupiers. (Thus, he is a noted proponent of the Greek Revival.) His most famous buildings are found in and around Berlin. These include Neue Wache
Neue Wache
The Neue Wache is a building in central Berlin, the capital of Germany. It is located on the north side of the Unter den Linden, a major east-west thoroughfare in the centre of the city. Dating from 1816, the Neue Wache was designed by the architect Karl Friedrich Schinkel and is a leading example...
(1816–1818), the Schauspielhaus
Konzerthaus Berlin
The Konzerthaus Berlin is a concert hall situated on the Gendarmenmarkt square in the central Mitte district of Berlin housing the German orchestra Konzerthausorchester Berlin...
(1819–1821) at the Gendarmenmarkt
Gendarmenmarkt
The Gendarmenmarkt is a square in Berlin, and the site of the Konzerthaus and the French and German Cathedrals. The centre of the Gendarmenmarkt is crowned by a statue of Germany's poet Friedrich Schiller. The square was created by Johann Arnold Nering at the end of the seventeenth century as the...
, which replaced the earlier theater that was destroyed by fire in 1817, and the Altes Museum
Altes Museum
The Altes Museum , is one of several internationally renowned museums on Museum Island in Berlin, Germany. Since restoration work in 1966, it houses the Antikensammlung of the Berlin State Museums...
(old museum, see photo) on Museum Island
Museum Island
Museum Island is the name of the northern half of an island in the Spree river in the central Mitte district of Berlin, Germany, the site of the old city of Cölln...
(1823–1830).

Later, Schinkel moved away from classicism altogether, embracing the Neo-Gothic in his Friedrichswerder Church
Friedrichswerder Church
The Friedrichswerder Church was the first Neo-Gothic church built in Berlin, Germany. It was designed by an architect better known for his Neoclassical architecture, Karl Friedrich Schinkel, and was built under his direction, 1824-1831....
(1824–1831). Schinkel's Bauakademie
Bauakademie
The Bauakademie in Berlin, Germany, built between 1832 and 1836, is considered one of the forerunners of modern architecture due to its theretofore uncommon use of red brick and the relatively streamlined facade of the building.Designed by Karl Friedrich Schinkel, the Bauakademie was built near...
(1832–1836), his most innovative building, eschewed historicist conventions and seemed to point the way to a clean-lined "modernist" architecture that would become prominent in Germany only toward the beginning of the 20th century.

Schinkel died in Berlin, Province of Brandenburg
Province of Brandenburg
The Province of Brandenburg was a province of the Kingdom of Prussia and the Free State of Prussia from 1815 to 1946.-History:The first people who are known to have inhabited Brandenburg were the Suevi. They were succeeded by the Slavonians, whom Henry II conquered and converted to Christianity in...
.
Schinkel, however, is noted as much for his theoretical work and his architectural drafts as for the relatively few buildings that were actually executed to his designs. Some of his merits are best shown in his unexecuted plans for the transformation of the Athenian Acropolis
Acropolis
Acropolis means "high city" in Greek, literally city on the extremity and is usually translated into English as Citadel . For purposes of defense, early people naturally chose elevated ground to build a new settlement, frequently a hill with precipitous sides...
into a royal palace for the new Kingdom of Greece
Kingdom of Greece
The Kingdom of Greece was a state established in 1832 in the Convention of London by the Great Powers...
and for the erection of the Orianda Palace in the Crimea
Crimea
Crimea , or the Autonomous Republic of Crimea , is a sub-national unit, an autonomous republic, of Ukraine. It is located on the northern coast of the Black Sea, occupying a peninsula of the same name...
. These and other designs may be studied in his Sammlung architektonischer Entwürfe (1820–1837) and his Werke der höheren Baukunst (1840–1842; 1845–1846). He also designed the famed Iron Cross
Iron Cross
The Iron Cross is a cross symbol typically in black with a white or silver outline that originated after 1219 when the Kingdom of Jerusalem granted the Teutonic Order the right to combine the Teutonic Black Cross placed above a silver Cross of Jerusalem....
medal of Prussia, and later Germany.
It has been speculated, however, that due to the difficult political circumstances – French occupation and the dependency on the Prussian king – and his relatively early death, which prevented him from seeing the explosive German industrialization in the second half of the 19th century, he did not even live up to the true potential exhibited by his sketches.

Prefatory essay from Collection of Architectural Designs including those designs which have been executed and objects whose execution was intended by Karl Friedrich Schinkel (Chicago: Exedra Books Incorporated, 1981). Also used as a reference.
The source of this article is wikipedia, the free encyclopedia.  The text of this article is licensed under the GFDL.