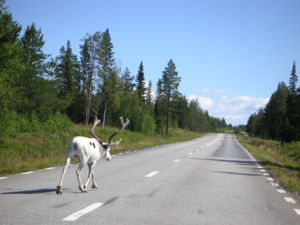 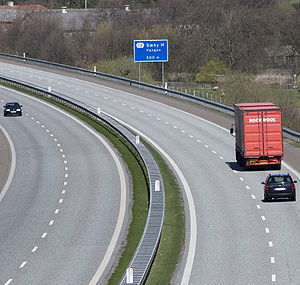 The European route E 45 goes between Sweden
Sweden
Sweden , officially the Kingdom of Sweden , is a Nordic country on the Scandinavian Peninsula in Northern Europe. Sweden borders with Norway and Finland and is connected to Denmark by a bridge-tunnel across the Öresund....
and Italy
Italy
Italy , officially the Italian Republic languages]] under the European Charter for Regional or Minority Languages. In each of these, Italy's official name is as follows:;;;;;;;;), is a unitary parliamentary republic in South-Central Europe. To the north it borders France, Switzerland, Austria and...
, through Denmark
Denmark
Denmark is a Scandinavian country in Northern Europe. The countries of Denmark and Greenland, as well as the Faroe Islands, constitute the Kingdom of Denmark . It is the southernmost of the Nordic countries, southwest of Sweden and south of Norway, and bordered to the south by Germany. Denmark...
, Germany
Germany
Germany , officially the Federal Republic of Germany , is a federal parliamentary republic in Europe. The country consists of 16 states while the capital and largest city is Berlin. Germany covers an area of 357,021 km2 and has a largely temperate seasonal climate...
and Austria
Austria
Austria , officially the Republic of Austria , is a landlocked country of roughly 8.4 million people in Central Europe. It is bordered by the Czech Republic and Germany to the north, Slovakia and Hungary to the east, Slovenia and Italy to the south, and Switzerland and Liechtenstein to the...
. With a length of about 4920 kilometres (3,057 mi), it is the longest north-south European route.

The E45 is not signposted in Finland
, since the official document uses the Swedish
Swedish language
Swedish is a North Germanic language, spoken by approximately 10 million people, predominantly in Sweden and parts of Finland, especially along its coast and on the Åland islands. It is largely mutually intelligible with Norwegian and Danish...
version ("Karesuando") of the name of the village at the border, hinting that it would start on the Swedish side. The Swedish government proposed the extension in 2005 and did not include the Finnish road in the proposal, which was accepted as it was. The gap between the end of E45 and the European route E8
European route E8
The European route E 8 is a European route that goes from Tromsø, Norway to Turku, Finland. The length of the route is .* E 8: Tromsø – Nordkjosbotn – Skibotn – Kilpisjärvi – Kaaresuvanto – Muonio – Tornio – Keminmaa – Kemi – Oulu – Liminka – Raahe – Kalajoki – Kokkola – Vaasa – Pori –...
is about 1 km along the existing Finnish regional road 959 Karesuvanto
Karesuvanto
Karesuvanto, also Kaaresuvanto, is a village in the Enontekiö municipality of the Lapland region in northern Finland, located on the Muonio River which forms the border with Sweden....
(FIN) - Karesuando
Karesuando
Karesuando is the northernmost locality situated in Kiruna Municipality, Norrbotten County, Sweden with 313 inhabitants in 2005....
(SWE)

In November 2006, the E 45 was extended with the current Swedish national road 45
Swedish national road 45
Swedish road E45, previously Swedish national road 45, is a national road and the longest road in Sweden, with a length of 1,690 km .It is one of the longest national roads in Europe...
, which makes it start from Karesuando
Karesuando
Karesuando is the northernmost locality situated in Kiruna Municipality, Norrbotten County, Sweden with 313 inhabitants in 2005....
at the E 8
European route E8
The European route E 8 is a European route that goes from Tromsø, Norway to Turku, Finland. The length of the route is .* E 8: Tromsø – Nordkjosbotn – Skibotn – Kilpisjärvi – Kaaresuvanto – Muonio – Tornio – Keminmaa – Kemi – Oulu – Liminka – Raahe – Kalajoki – Kokkola – Vaasa – Pori –...
at the Swedish–Finnish border, over Östersund
Östersund
Östersund is an urban area in Jämtland in the middle of Sweden. It is the seat of Östersund Municipality and the capital of Jämtland County. Östersund is located at the shores of Sweden's fifth largest lake, Storsjön, opposite the island Frösön, and is the only city in Jämtland. Östersund is the...
–Mora–Grums
Grums
Grums is a locality and the seat of Grums Municipality, Värmland County, Sweden with 5,231 inhabitants in 2005.- References :...
, to Gothenburg
Gothenburg
Gothenburg is the second-largest city in Sweden and the fifth-largest in the Nordic countries. Situated on the west coast of Sweden, the city proper has a population of 519,399, with 549,839 in the urban area and total of 937,015 inhabitants in the metropolitan area...
and on. This extended the length of the route by about 1690 km (1,050 mi). The signs of road 45 was changed to E 45 during the summer of 2007. The E 45 has now no other national number. In Sweden the road is called Inlandsvägen
Inlandsvägen
Inlandsvägen is a touristical road passing through the center of Sweden from Gothenburg in the south up to Lapland in the north. Inlandsvägen is simultaneously the Swedish part of the European Route 45...
.

The E45 in Sweden is mostly an ordinary road. Between Karesuando and Torsby
Torsby
Torsby is a locality and the seat of Torsby Municipality in Värmland County, Sweden with 4,012 inhabitants in 2005.Fortum Ski Tunnel Torsby, the world's longest ski tunnel, is located in Torsby. Sebra Film is located in Torsby. Football manager Sven-Göran Eriksson and footballer Marcus Berg are...
(1370 km) the road is usually 6-8 meters wide, and goes mostly through sparsely populated forests, with occasional villages and only two cities, Östersund and Mora. South of Grums the E45 is a motorway for 6 km together with the E18. Between Säffle and Trollhättan several parts of it is 2+1 road
2+1 road
2+1 road is a specific category of three-lane road, consisting of two lanes in one direction and one lane in the other, alternating every few kilometres, and separated usually with a steel cable barrier. Traditional roads of at least width can be converted to 2+1 roads and reach near-motorway...
with a middle barrier. Between Trollhättan and Göteborg a motorway is under construction, finished 2012. The speed limit is usually 100 km/h north of Mora and usually 90 south thereof. There are 27 road crossings or intersections where the Swedish E45 does not follow the straight direction. There are 26 level crossings with railways.

The ferry Gothenburg
Gothenburg
Gothenburg is the second-largest city in Sweden and the fifth-largest in the Nordic countries. Situated on the west coast of Sweden, the city proper has a population of 519,399, with 549,839 in the urban area and total of 937,015 inhabitants in the metropolitan area...
–Frederikshavn
Frederikshavn
This article is about a Danish town. For the German town, see Friedrichshafen, and for the Finnish town, see Fredrikshamn .Frederikshavn is a Danish town in Frederikshavn municipality, Region Nordjylland on the northeast coast of the Jutland peninsula in northern Denmark. Its name translates to...
has about 8 daily departures and takes 2–3½ hours.

In Denmark the E 45 is a motorway (speed limit 110 km/h - 130 km/h) from the south of Frederikshavn to the Danish–German border. The E 45 has no other national number. It connects to the E 39
European route E39
E 39 is the designation of a 1330 km long north-south road in Norway and Denmark, running from Klett just south of Trondheim to Aalborg, via Orkanger, Vinjeøra, Halsa ... Straumsnes, Krifast, Batnfjordsøra, Molde ... Vestnes, Skodje, Ålesund ... Volda ... Nordfjordeid ... Sandane, Førde,...
and E 20
European route E20
The European route E 20 is part of the United Nations International E-road network.It runs roughly west-east through Ireland, the United Kingdom, Denmark, Sweden, Estonia and finally Russia. The length is . The road is not continuous, at three points, a sea crossing is required. ...
motorways.

In 1992 it was renamed from E 3 (which actually before 1985 ended in Lisbon, Portugal) and until 2006, with the extension in Sweden, the northern endpoint was Frederikshavn.

The total length in Denmark is 357 km.

The native Sicilian population and mass media reports always refer to E45 as the Autostrada and/or it's numbered route (A18).
The source of this article is wikipedia, the free encyclopedia.  The text of this article is licensed under the GFDL.