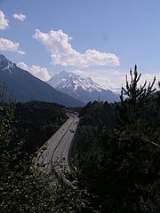 The motorway E45
European route E45
The European route E 45 goes between Sweden and Italy, through Denmark, Germany and Austria. With a length of about , it is the longest north-south European route...
(European designation; in Italy A 22, in Austria A 13) leading from Innsbruck
Innsbruck
- Main sights :- Buildings :*Golden Roof*Kaiserliche Hofburg *Hofkirche with the cenotaph of Maximilian I, Holy Roman Emperor*Altes Landhaus...
via Bolzano to Verona
Verona
Verona ; German Bern, Dietrichsbern or Welschbern) is a city in the Veneto, northern Italy, with approx. 265,000 inhabitants and one of the seven chef-lieus of the region. It is the second largest city municipality in the region and the third of North-Eastern Italy. The metropolitan area of Verona...
and Modena
Modena
Modena is a city and comune on the south side of the Po Valley, in the Province of Modena in the Emilia-Romagna region of Italy....
uses this pass, and is one of the most important north-south connections in Europe. Even with the removal of customs, the long traffic jams before the Brenner Pass are dreaded by Northern Europeans who want to spend their holidays on the Mediterranean coast
Mediterranean Sea
The Mediterranean Sea is a sea connected to the Atlantic Ocean surrounded by the Mediterranean region and almost completely enclosed by land: on the north by Anatolia and Europe, on the south by North Africa, and on the east by the Levant...
.

The Europabrücke
Europabrücke
Europabrücke, or Europe's bridge, is a long bridge spanning the Wipp valley just south of Innsbruck, Tirol, Austria. The A13 Brenner Autobahn passes over this bridge, above the Sill River, forming part of the main route from western Austria to Italy via South Tyrol across the Alps...
(Europe Bridge), located just outside of Innsbruck
Innsbruck
- Main sights :- Buildings :*Golden Roof*Kaiserliche Hofburg *Hofkirche with the cenotaph of Maximilian I, Holy Roman Emperor*Altes Landhaus...
and a few km north of the Brenner Pass, is a large concrete bridge carrying the six-lane autobahn over the valley of the Sill River
Sill River
The Sill is a 35 km long river in Tyrol, Austria. It is one of the larger tributaries of the Inn River in the Austrian Tyrol. It flows through the Wipptal valley north to Innsbruck. Its source lies east of the Brenner Pass. At the "Sillzwickel" - the name of the point where it meets the Inn at...
. At a height of 180 metres and a length of 820 metres, it was celebrated as a masterpiece of engineering upon its completion in 1963.

The heavy freight traffic travelling through the Inn Valley to reach the Brenner Pass, polluting this scenic area, causes much debate in regional and European politics. About 1.8 million trucks crossed the Europa Bridge in 2004.