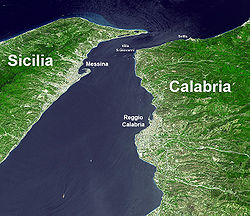 The strait is characterized by strong tidal currents, that established a unique marine ecosystem
Marine Life of the Straits of Messina
The hydrology of the Strait of Messina is extraordinary and unique and the Strait accommodates special populations of marine organisms . The intense currents and characteristic chemistry of the waters of the Strait determine an extraordinary biocoenosis in the Mediterranean Sea with a high...
. A natural whirlpool
Whirlpool
A whirlpool is a swirling body of water usually produced by ocean tides. The vast majority of whirlpools are not very powerful. More powerful ones are more properly termed maelstroms. Vortex is the proper term for any whirlpool that has a downdraft...
in the Northern portion of the strait has been linked to the Greek legend of Scylla
Scylla
In Greek mythology, Scylla was a monster that lived on one side of a narrow channel of water, opposite its counterpart Charybdis. The two sides of the strait were within an arrow's range of each other—so close that sailors attempting to avoid Charybdis would pass too close to Scylla and vice...
and Charybdis
Charybdis
Charybdis or Kharybdis was a sea monster, later rationalised as a whirlpool and considered a shipping hazard in the Strait of Messina.-The mythological background:...
. In some circumstances, the mirage of Fata Morgana
Fata Morgana (mirage)
A Fata Morgana is an unusual and very complex form of mirage, a form of superior mirage, which, like many other kinds of superior mirages, is seen in a narrow band right above the horizon...
can be observed when looking at Sicily from Calabria.

In 1957, a 220-kV
Volt
The volt is the SI derived unit for electric potential, electric potential difference, and electromotive force. The volt is named in honor of the Italian physicist Alessandro Volta , who invented the voltaic pile, possibly the first chemical battery.- Definition :A single volt is defined as the...
overhead powerline
Overhead powerline
An overhead power line is an electric power transmission line suspended by towers or utility poles. Since most of the insulation is provided by air, overhead power lines are generally the lowest-cost method of transmission for large quantities of electric energy...
was built across the Strait of Messina. Its pylons
Electricity pylon
A transmission tower is a tall structure, usually a steel lattice tower, used to support an overhead power line. They are used in high-voltage AC and DC systems, and come in a wide variety of shapes and sizes...
are among the highest in the world. This powerline has since been replaced by a submarine power cable
Submarine power cable
Submarine power cables are major transmission cables for carrying electric power below the surface of the water. These are called "submarine" because they usually carry electric power beneath salt water but it is also possible to use submarine power cables beneath fresh water...
, but the pylons remain and are protected as historical monuments. (See Pylons of Messina
Pylons of Messina
The Pylons of Messina were once used to carry a 220 kilovolt powerline across the Strait of Messina, between the Rizziconi substation in Calabria on the Italian mainland and the Sorgente substation in Sicily.-Design:...
.)

For decades, the possibility of building a bridge across the Messina Strait has been under discussion. In 2006, under Prime Minister Romano Prodi
Romano Prodi
Romano Prodi is an Italian politician and statesman. He served as the Prime Minister of Italy, from 17 May 1996 to 21 October 1998 and from 17 May 2006 to 8 May 2008...
the project was cancelled. However, on 6 March 2009, as part of a massive new public works program, Silvio Berlusconi
Silvio Berlusconi
Silvio Berlusconi , also known as Il Cavaliere – from knighthood to the Order of Merit for Labour which he received in 1977 – is an Italian politician and businessman who served three terms as Prime Minister of Italy, from 1994 to 1995, 2001 to 2006, and 2008 to 2011. Berlusconi is also the...
's government announced that plans to construct the Messina Bridge had been fully revived, pledging EUR 1.3 billion as a contribution to its estimated cost of EUR 6.1 billion Some 3.3 km long and 60 m wide, the bridge would be supported by two 382 m pillars, each higher than the Empire State Building
Empire State Building
The Empire State Building is a 102-story landmark skyscraper and American cultural icon in New York City at the intersection of Fifth Avenue and West 34th Street. It has a roof height of 1,250 feet , and with its antenna spire included, it stands a total of 1,454 ft high. Its name is derived...
. The plan accounts for six motorway lanes, a railway for up to 200 trains a day and two walkways.

Supporters perceive the bridge as a huge job-creation scheme and a boost for tourism to the island. Opponents see it as an ecological disaster, a structure at risk due to especially strong winds and earthquakes (the area having an intense seismic record), and a boon for Sicilian and Calabrian organized crime. Berlusconi claims work will be completed by 2016. 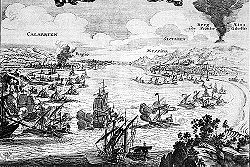