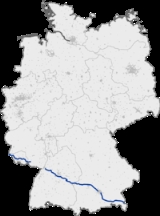 Encyclopedia
is an autobahn in southern Germany
Germany
Germany , officially the Federal Republic of Germany , is a federal parliamentary republic in Europe. The country consists of 16 states while the capital and largest city is Berlin. Germany covers an area of 357,021 km2 and has a largely temperate seasonal climate...
that runs 497 km (309 mi) from the Luxembourg
Luxembourg
Luxembourg , officially the Grand Duchy of Luxembourg , is a landlocked country in western Europe, bordered by Belgium, France, and Germany. It has two principal regions: the Oesling in the North as part of the Ardennes massif, and the Gutland in the south...
A13 motorway at Schengen via Neunkirchen
Neunkirchen, Saarland
Neunkirchen is a town and a municipality in Saarland, Germany. It is the largest town in, and the seat of the district of Neunkirchen. It is situated on the river Blies, approx. 20 km northeast of Saarbrücken. With about 50,000 inhabitants, Neunkirchen is Saarland's 2nd largest city...
, Pirmasens
Pirmasens
Pirmasens is a district-free city in Rhineland-Palatinate, Germany, near the border with France. It is famous for the manufacture of shoes. The surrounding rural district was called Pirmasens from 1818 until 1997, when it was renamed Südwestpfalz....
, Karlsruhe
Karlsruhe
The City of Karlsruhe is a city in the southwest of Germany, in the state of Baden-Württemberg, located near the French-German border.Karlsruhe was founded in 1715 as Karlsruhe Palace, when Germany was a series of principalities and city states...
, Stuttgart
Stuttgart
Stuttgart is the capital of the state of Baden-Württemberg in southern Germany. The sixth-largest city in Germany, Stuttgart has a population of 600,038 while the metropolitan area has a population of 5.3 million ....
, Ulm
Ulm
Ulm is a city in the federal German state of Baden-Württemberg, situated on the River Danube. The city, whose population is estimated at 120,000 , forms an urban district of its own and is the administrative seat of the Alb-Donau district. Ulm, founded around 850, is rich in history and...
, Augsburg
Augsburg
Augsburg is a city in the south-west of Bavaria, Germany. It is a university town and home of the Regierungsbezirk Schwaben and the Bezirk Schwaben. Augsburg is an urban district and home to the institutions of the Landkreis Augsburg. It is, as of 2008, the third-largest city in Bavaria with a...
and Munich
Munich
Munich The city's motto is "" . Before 2006, it was "Weltstadt mit Herz" . Its native name, , is derived from the Old High German Munichen, meaning "by the monks' place". The city's name derives from the monks of the Benedictine order who founded the city; hence the monk depicted on the city's coat...
to the Austria
Austria
Austria , officially the Republic of Austria , is a landlocked country of roughly 8.4 million people in Central Europe. It is bordered by the Czech Republic and Germany to the north, Slovakia and Hungary to the east, Slovenia and Italy to the south, and Switzerland and Liechtenstein to the...
n West Autobahn near Salzburg
Salzburg
-Population development:In 1935, the population significantly increased when Salzburg absorbed adjacent municipalities. After World War II, numerous refugees found a new home in the city. New residential space was created for American soldiers of the postwar Occupation, and could be used for...
.

The A 8 is a significant East-West transit route. Its construction began in March 1934 during Nazi
Nazi Germany
Nazi Germany , also known as the Third Reich , but officially called German Reich from 1933 to 1943 and Greater German Reich from 26 June 1943 onward, is the name commonly used to refer to the state of Germany from 1933 to 1945, when it was a totalitarian dictatorship ruled by...
rule, the section between Karlsruhe and Salzburg having been completed when road works discontinued in World War II
World War II
World War II, or the Second World War , was a global conflict lasting from 1939 to 1945, involving most of the world's nations—including all of the great powers—eventually forming two opposing military alliances: the Allies and the Axis...
. Although parts have been modernized and extended afterwards, significant sections remained in their original condition from the 1930s - 2+2 lanes, no emergency or acceleration lanes, steep hills and tight curves. In combination with today's traffic this makes the A 8 one of the most crowded and dangerous autobahns in Germany. Especially in the wintertime the slopes of the Black Forest
Black Forest
The Black Forest is a wooded mountain range in Baden-Württemberg, southwestern Germany. It is bordered by the Rhine valley to the west and south. The highest peak is the Feldberg with an elevation of 1,493 metres ....
, the Swabian Alb
Swabian Alb
The Swabian Alps or Swabian Jura is a low mountain range in Baden-Württemberg, Germany, extending 220 km from southwest to northeast and 40 to 70 km in width. It is named after the region of Swabia....
near Aichelberg
Aichelberg
Aichelberg is a municipality in the district of Göppingen in Baden-Württemberg in southern Germany....
, as well as the Irschenberg
Irschenberg
Irschenberg is a municipality in the district of Miesbach in the German state of Bavaria, about southeast of Munich. It consists of numerous hamlets situated on the Irschenberg hill range....
become bottlenecks when heavy trucks crawl uphill.

As of 2006, a gap remains between Pirmasens
Pirmasens
Pirmasens is a district-free city in Rhineland-Palatinate, Germany, near the border with France. It is famous for the manufacture of shoes. The surrounding rural district was called Pirmasens from 1818 until 1997, when it was renamed Südwestpfalz....
and Karlsruhe
Karlsruhe
The City of Karlsruhe is a city in the southwest of Germany, in the state of Baden-Württemberg, located near the French-German border.Karlsruhe was founded in 1715 as Karlsruhe Palace, when Germany was a series of principalities and city states...
with no immediate plans to close the gap. Additionally, a sub-standard section between Aichelberg
Aichelberg
Aichelberg is a municipality in the district of Göppingen in Baden-Württemberg in southern Germany....
and Hohenstadt
Hohenstadt
Hohenstadt is a municipality in the Göppingen in Baden-Württemberg in southern Germany. It is located in the Swabian Alb plateau, about 20 km south of Göppingen....
is being re-routed with a projected 2010 completion date. It is proposed that tolls
Toll road
A toll road is a privately or publicly built road for which a driver pays a toll for use. Structures for which tolls are charged include toll bridges and toll tunnels. Non-toll roads are financed using other sources of revenue, most typically fuel tax or general tax funds...
be charged on this tunnel-oriented replacement stretch (presumably to cover the costs of the project), which would make it the first tolled section of a German autobahn.