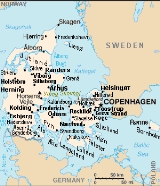 Horsens lies at the end of Horsens Fjord
Horsens Fjord
Horsens Fjord is a Danish fjord in the east of Jutland which stretches from the islands of Alrø and Hjarnø in the east to the town of Horsens on the mainland. It is some long. The navigational channel to Horsens has a depth of ....
in eastern Jutland. The city is surrounded by typical moraine
Moraine
A moraine is any glacially formed accumulation of unconsolidated glacial debris which can occur in currently glaciated and formerly glaciated regions, such as those areas acted upon by a past glacial maximum. This debris may have been plucked off a valley floor as a glacier advanced or it may have...
landscape with low hills and valleys created by glaciers during the last ice ages. Horsens is 50 km (31.1 mi) south of Aarhus
Aarhus
Aarhus or Århus is the second-largest city in Denmark. The principal port of Denmark, Aarhus is on the east side of the peninsula of Jutland in the geographical center of Denmark...
and 30 km (18.6 mi) north of Vejle
Vejle
Vejle is a town in Denmark, in the southeast of the Jutland Peninsula at the head of Vejle Fjord, where the Vejle and Grejs Rivers and their valleys converge. It is the site of the councils of Vejle Municipality and the Region of Southern Denmark...
, and approximately 200 km (124.3 mi) from Copenhagen
Copenhagen
Copenhagen is the capital and largest city of Denmark, with an urban population of 1,199,224 and a metropolitan population of 1,930,260 . With the completion of the transnational Øresund Bridge in 2000, Copenhagen has become the centre of the increasingly integrating Øresund Region...
.

It is believed the name Horsens derives from the old Danish
Danish language
Danish is a North Germanic language spoken by around six million people, principally in the country of Denmark. It is also spoken by 50,000 Germans of Danish ethnicity in the northern parts of Schleswig-Holstein, Germany, where it holds the status of minority language...
words hors (horse) and næs (headland). From the 12th century the name Horsenes is known.

Excavations have shown that the city was expanded around 1300 with a moat going around the city and its harbour.
From the middle of the 19th century industrialisation started and the population rose dramatically when people from the countryside moved to the city to work in the factories. The first Danish iron foundry outside of Copenhagen
Copenhagen
Copenhagen is the capital and largest city of Denmark, with an urban population of 1,199,224 and a metropolitan population of 1,930,260 . With the completion of the transnational Øresund Bridge in 2000, Copenhagen has become the centre of the increasingly integrating Øresund Region...
was opened as well as tobacco and textile factories.

The city is currently undergoing a positive development with new industry moving to Horsens, or expanding their activities already in Horsens. A lot of electronics and graphical companies are based there. Horsens also has the only Industrial Museum in Denmark. The city is also home to VIA University College
VIA University College
-Preview:VIA University College is one of eight new regional organizations of different study sites in Denmark offering bachelor courses of all kinds in all of Central Denmark Region....
. 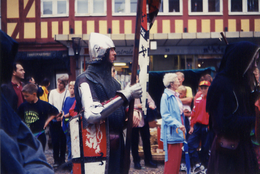 In recent years, much effort has been made to expand and improve cultural events. Several internationally known artists, like Madonna
Madonna (entertainer)
Madonna is an American singer-songwriter, actress and entrepreneur. Born in Bay City, Michigan, she moved to New York City in 1977 to pursue a career in modern dance. After performing in the music groups Breakfast Club and Emmy, she released her debut album in 1983...
, Iron Maiden
Iron Maiden
Iron Maiden are an English heavy metal band from Leyton in east London, formed in 1975 by bassist and primary songwriter Steve Harris. Since their inception, the band's discography has grown to include a total of thirty-six albums: fifteen studio albums; eleven live albums; four EPs; and six...
, Joe Cocker
Joe Cocker
John Robert "Joe" Cocker, OBE is an English rock and blues musician, composer and actor, who came to popularity in the 1960s, and is most known for his gritty voice, his idiosyncratic arm movements while performing, and his cover versions of popular songs, particularly those of The Beatles...
, Elton John
Elton John
Sir Elton Hercules John, CBE, Hon DMus is an English rock singer-songwriter, composer, pianist and occasional actor...
, The Beach Boys
The Beach Boys
The Beach Boys are an American rock band, formed in 1961 in Hawthorne, California. The group was initially composed of brothers Brian, Dennis and Carl Wilson, their cousin Mike Love, and friend Al Jardine. Managed by the Wilsons' father Murry, The Beach Boys signed to Capitol Records in 1962...
, Bob Dylan
Bob Dylan
Bob Dylan is an American singer-songwriter, musician, poet, film director and painter. He has been a major and profoundly influential figure in popular music and culture for five decades. Much of his most celebrated work dates from the 1960s when he was an informal chronicler and a seemingly...
, Tom Jones
Tom Jones (singer)
Sir Thomas John Woodward, OBE , known by his stage name Tom Jones, is a Welsh singer.Since the mid 1960s, Jones has sung many styles of popular music – pop, rock, R&B, show tunes, country, dance, techno, soul and gospel – and sold over 100 million records...
, Bryan Adams
Bryan Adams
Bryan Adams, is a Canadian rock singer-songwriter, guitarist, bassist, producer, actor and photographer. Adams has won dozens of awards and nominations, including 20 Juno Awards among 56 nominations. He has also received 15 Grammy Award nominations including a win for Best Song Written...
, David Bowie
David Bowie
David Bowie is an English musician, actor, record producer and arranger. A major figure for over four decades in the world of popular music, Bowie is widely regarded as an innovator, particularly for his work in the 1970s...
, José Carreras
José Carreras
Josep Maria Carreras i Coll , better known as José Carreras , is a Spanish Catalan tenor particularly known for his performances in the operas of Verdi and Puccini...
, Helmut Lotti
Helmut Lotti
Helmut Lotti , is a Flemish Belgian tenor and singer-songwriter. Lotti performs in several styles and languages: Once an Elvis impersonator, he has sung African and Latino hit records, and he crossed over into classical music in the 1990s.-Life and music:The son of Luc Lotigiers and Rita Lagrou,...
, Westlife
Westlife
Westlife are an Irish boy band established on 3 July 1998. They are to disband in 2012. The group's line-up was Nicky Byrne, Kian Egan, Mark Feehily, Shane Filan, and Brian McFadden . The group are the only act in British and Irish history to have their first seven singles peak at number one...
, R.E.M.
R.E.M.
R.E.M. was an American rock band formed in Athens, Georgia, in 1980 by singer Michael Stipe, guitarist Peter Buck, bassist Mike Mills and drummer Bill Berry. One of the first popular alternative rock bands, R.E.M. gained early attention due to Buck's ringing, arpeggiated guitar style and Stipe's...
, Paul McCartney
Paul McCartney
Sir James Paul McCartney, MBE, Hon RAM, FRCM is an English musician, singer-songwriter and composer. Formerly of The Beatles and Wings , McCartney is listed in Guinness World Records as the "most successful musician and composer in popular music history", with 60 gold discs and sales of 100...
, Robbie Williams
Robbie Williams
Robert Peter "Robbie" Williams is an English singer-songwriter, vocal coach and occasional actor. He is a member of the pop group Take That. Williams rose to fame in the band's first run in the early- to mid-1990s. After many disagreements with the management and certain group members, Williams...
, The Rolling Stones
The Rolling Stones
The Rolling Stones are an English rock band, formed in London in April 1962 by Brian Jones , Ian Stewart , Mick Jagger , and Keith Richards . Bassist Bill Wyman and drummer Charlie Watts completed the early line-up...
, Madonna
Madonna (entertainer)
Madonna is an American singer-songwriter, actress and entrepreneur. Born in Bay City, Michigan, she moved to New York City in 1977 to pursue a career in modern dance. After performing in the music groups Breakfast Club and Emmy, she released her debut album in 1983...
, Dolly Parton
Dolly Parton
Dolly Rebecca Parton is an American singer-songwriter, author, multi-instrumentalist, actress and philanthropist, best known for her work in country music. Dolly Parton has appeared in movies like 9 to 5, The Best Little Whorehouse in Texas, Steel Magnolias and Straight Talk...
, AC/DC
AC/DC
AC/DC are an Australian rock band, formed in 1973 by brothers Malcolm and Angus Young. Commonly classified as hard rock, they are considered pioneers of heavy metal, though they themselves have always classified their music as simply "rock and roll"...
, U2
U2
U2 are an Irish rock band from Dublin. Formed in 1976, the group consists of Bono , The Edge , Adam Clayton , and Larry Mullen, Jr. . U2's early sound was rooted in post-punk but eventually grew to incorporate influences from many genres of popular music...
and Snow Patrol
Snow Patrol
Snow Patrol are an alternative rock band from Bangor, County Down, Northern Ireland. Formed at the University of Dundee in 1994 as an indie rock band, the band is now based in Glasgow...
have performed, or have performances planned in Horsens.

One of the largest cultural events in Denmark is the annual European Medieval Festival on the last Friday and Saturday in August. The town centre of Horsens is transformed into the largest medieval market town in Northern Europe with activities and entertainment for families and children of all ages.

The city is home to Horsens Industrimuseum, a museum showing the history of the industrial society. The museum shows the technological development as well as the development in living conditions for workers.

The largest educational institution in Horsens is VIA University College offering a wide range of mostly technical educations.

From 1853 the city housed the Horsens Statsfængsel prison, which held prisoners serving longer sentences. Notable prisoners included former minister of justice
Justice Minister of Denmark
The Danish Minister for Justice is the head of the Ministry of Justice and a cabinet member.Under the current government, the post is held by Morten Bødskov.As the head of the department, the minister is responsible for:* The General judicial system including...
Peter Adler Alberti and mass murderer Peter Lundin
Peter Lundin
Bjarne Skounborg , born Peter Kenneth Bostrøm Lundin, and more commonly known as Peter Lundin, is a Danish convicted serial killer.- Early life :...
.

The last execution in peacetime in Denmark happened in the prison in 1892 when Jens Nielsen was decapitated in the courtyard.

Carl August Lorentzen was a safe cracker who became famous for his escape from the prison in 1950 when he dug a tunnel from his cell and out to freedom. When the guards discovered he was missing they found a note from him with the words "Where there is a will there is a way". Lorentzen was captured a few days later on a nearby farm.

The old run down buildings were not fit for a modern prison so in 2006 the prison was closed down and the newly built Statsfængslet Østjylland prison was opened.