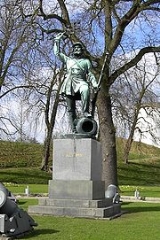 Encyclopedia
Fredericia is a town located in Fredericia municipality
Fredericia municipality
Fredericia municipality is a municipality on the east coast of the Jutland peninsula in south-central Denmark. Its belongs to Region of Southern Denmark, covers an area of 134.46 km², and has a total population of 49,463...
in the eastern part of the Jutland
Jutland
Jutland , historically also called Cimbria, is the name of the peninsula that juts out in Northern Europe toward the rest of Scandinavia, forming the mainland part of Denmark. It has the North Sea to its west, Kattegat and Skagerrak to its north, the Baltic Sea to its east, and the Danish–German...
peninsula in Denmark
Denmark
Denmark is a Scandinavian country in Northern Europe. The countries of Denmark and Greenland, as well as the Faroe Islands, constitute the Kingdom of Denmark . It is the southernmost of the Nordic countries, southwest of Sweden and south of Norway, and bordered to the south by Germany. Denmark...
, in a sub-region known locally as Trekanten
Triangle Region Denmark
The Trekanten or Triangle Region Denmark is a Danish governmental economic initiative which began in 2000. It established a sub-region of municipalities in the centre of Denmark, principally in Jutland, but with the inclusion of Middelfart on Fyn...
, or The Triangle. It was founded in 1650 by Frederick III
Frederick III of Denmark
Frederick III was king of Denmark and Norway from 1648 until his death. He instituted absolute monarchy in Denmark and Norway in 1660, confirmed by law in 1665 as the first in western historiography. He was born the second-eldest son of Christian IV of Denmark and Anne Catherine of Brandenburg...
, after whom it was named.

After the devastation caused by the Thirty Years' War
Thirty Years' War
The Thirty Years' War was fought primarily in what is now Germany, and at various points involved most countries in Europe. It was one of the most destructive conflicts in European history....
in a largely unfortified Jutland, King Christian IV
Christian IV of Denmark
Christian IV was the king of Denmark-Norway from 1588 until his death. With a reign of more than 59 years, he is the longest-reigning monarch of Denmark, and he is frequently remembered as one of the most popular, ambitious and proactive Danish kings, having initiated many reforms and projects...
realized the necessity of building a strong fortress in Jutland, and decided that this project could be combined with his plans for building a large town in Jutland.

A fortified encampment was built on a point of land called Lyngs Odde, near the current location of Fredericia, with a rampart stretching to either side of the point, thus protecting the encampment from attacks. However, the fortifications were not perfect, and when Swedish Field Marshal Lennart Torstenson
Lennart Torstenson
Lennart Torstenson, Count of Ortala, Baron of Virestad , was a Swedish Field Marshal and military engineer.-Early career:He was born at Forstena in Västergötland - he always wrote his name Linnardt Torstenson...
invaded Jutland, he was able to break through the ramparts. It was Frederick III
Frederick III of Denmark
Frederick III was king of Denmark and Norway from 1648 until his death. He instituted absolute monarchy in Denmark and Norway in 1660, confirmed by law in 1665 as the first in western historiography. He was born the second-eldest son of Christian IV of Denmark and Anne Catherine of Brandenburg...
who was finally able to complete the plans for the fortification, also adding a flank fortification on nearby Bers Odde as suggested by Danish Imperial Marshal Anders Bille
Anders Bille
Anders Bille was the Danish Rigsmarsk, the officer leading the entire armed forces of Denmark, from 1642.From 1635 to 1643 he was the Governor of Ösel ....
.

On 15 December 1650, the King signed the document giving the town its first privileges, and work on the new fortifications could begin. In 1651, the town was named Frederiksodde (Frederick's Point) after the king, and on 22 April 1664, it was given the new Latinized name of Fredericia.

The town is one of Denmark
Denmark
Denmark is a Scandinavian country in Northern Europe. The countries of Denmark and Greenland, as well as the Faroe Islands, constitute the Kingdom of Denmark . It is the southernmost of the Nordic countries, southwest of Sweden and south of Norway, and bordered to the south by Germany. Denmark...
's largest traffic hubs
Transportation hub
A transport hub is a place where passengers and cargo are exchanged between vehicles or between transport modes. Public transport hubs include train stations, rapid transit stations, bus stops, tram stop, airports and ferry slips. Freight hubs include classification yards, seaports and truck...
, and location of Denmark's largest shipyard Fredericia Skibsværft A/S.

The town is a major barracks
Barracks
Barracks are specialised buildings for permanent military accommodation; the word may apply to separate housing blocks or to complete complexes. Their main object is to separate soldiers from the civilian population and reinforce discipline, training and esprit de corps. They were sometimes called...
, home to the Royal Danish Army
Royal Danish Army
The Royal Danish Army is the land warfare branch of the Danish Defence Forces, together with the Danish Home Guard.For the last decade, the Royal Danish Army has undergone a massive transformation of structures, equipment and training methods, abandoning its traditional role of anti-invasion...
's army's Signals Regiment (Telegrafregimentet
Telegrafregimentet
Telegrafregimentet is a regiment of the Royal Danish Army. It was established in 1951 with the purpose to train and equip units to support the Danish army with war-time Command, Control and Communications...
), which is located at Rye's Barracks (Ryes Kaserne) and Bülow's Barracks (Bülows Kaserne).

Kokkola
Kokkola
Kokkola is a town and municipality of Finland.The town is located in the province of Western Finland and is part of the Central Ostrobothnia region. The town has a population of and covers an area of of which is water. The population density is...
, Finland, 1948 Kristiansund
Kristiansund
Kristiansund is a city and municipality on the western coast of Norway, in the Nordmøre district of Møre og Romsdal county. It was officially awarded township status in 1742, and it is still the major town for the region. The administrative center of the municipality is the city of Kristiansund...
, since 1948 Härnösand
Härnösand
Härnösand is a locality and the seat of Härnösand Municipality in Västernorrland County, Sweden with 18,003 inhabitants in 2005. It is called "the gate to the High Coast" because of the world heritage landscape rises just some miles north of Härnösand...
, Sweden, since 1948 Ilulissat
Ilulissat
Ilulissat is a town in the Qaasuitsup municipality in western Greenland, located approximately north of the Arctic Circle. With the population of 4,546 as of 2010, it is the third-largest settlement in Greenland, after Nuuk and Sisimiut....
, Greenland, since 1962 Herford
Herford
Herford is a town in North Rhine-Westphalia, Germany, located in the lowlands between the hill chains of the Wiehen Hills and the Teutoburg Forest. It is the capital of the district of Herford.- Geographic location :...
, since 1987 Šiauliai
Šiauliai
Šiauliai , is the fourth largest city in Lithuania, with a population of 133,900. It is the capital of Šiauliai County. Unofficially, the city is the capital of Northern Lithuania.-Names:...
, since 1993
The source of this article is wikipedia, the free encyclopedia.  The text of this article is licensed under the GFDL.