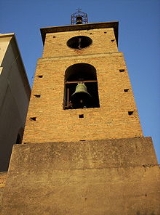 Encyclopedia
Villa San Giovanni is a town and comune
Comune
In Italy, the comune is the basic administrative division, and may be properly approximated in casual speech by the English word township or municipality.-Importance and function:...
in the province of Reggio Calabria
Province of Reggio Calabria
The Province of Reggio Calabria is a province in the Calabria region of Italy. Its capital is the city of Reggio., it has an area of 3,183 km², and a total population of 565,866. There are 97 comuni in the province, see Comuni of the Province of Reggio Calabria.- Economy :The region is...
, Calabria
Calabria
Calabria , in antiquity known as Bruttium, is a region in southern Italy, south of Naples, located at the "toe" of the Italian Peninsula. The capital city of Calabria is Catanzaro....
, southern Italy
Italy
Italy , officially the Italian Republic languages]] under the European Charter for Regional or Minority Languages. In each of these, Italy's official name is as follows:;;;;;;;;), is a unitary parliamentary republic in South-Central Europe. To the north it borders France, Switzerland, Austria and...
. As of 2010 its population was of 13,747.

It is located on the coast of Strait of Messina
Strait of Messina
The Strait of Messina is the narrow passage between the eastern tip of Sicily and the southern tip of Calabria in the south of Italy. It connects the Tyrrhenian Sea with the Ionian Sea, within the central Mediterranean...
, facing the city of Messina across the narrow strait. The Punta Pezzo
Punta Pezzo
Punta Pezzo is a point in Reggio Calabria, southern Italy. It is the closest point of Calabria to Sicily and is the northernmost point of the Calabrian side of the Strait of Messina, lying on the northern channel. The coasts of this sea area are crossed by very strong currents and the topography...
lies in the area and is the nearest point to Sicily
Sicily
Sicily is a region of Italy, and is the largest island in the Mediterranean Sea. Along with the surrounding minor islands, it constitutes an autonomous region of Italy, the Regione Autonoma Siciliana Sicily has a rich and unique culture, especially with regard to the arts, music, literature,...
. It contains a notable lighthouse.

In December 1908 a powerful earthquake killed 698 people in Villa San Giovanni, almost 10% of the then population.

Ferry services link Villa San Giovanni and Messina, including a train ferry
Train ferry
A train ferry is a ship designed to carry railway vehicles. Typically, one level of the ship is fitted with railway tracks, and the vessel has a door at the front and/or rear to give access to the wharves. In the United States, train ferries are sometimes referred to as "car ferries", as...
departing from the main railway station
Villa San Giovanni railway station
Villa San Giovanni railway station is the main station serving the town and comune of Villa San Giovanni, in the region of Calabria, southern Italy. Opened in 1884, it forms part of the Southern Tyrrhenian railway . The station is currently managed by Rete Ferroviaria Italiana...
. The town is also served by the A3 motorway Salerno
Salerno
Salerno is a city and comune in Campania and is the capital of the province of the same name. It is located on the Gulf of Salerno on the Tyrrhenian Sea....
-Reggio Calabria
Reggio Calabria
Reggio di Calabria , commonly known as Reggio Calabria or Reggio, is the biggest city and the most populated comune of Calabria, southern Italy, and is the capital of the Province of Reggio Calabria and seat of the Council of Calabrian government.Reggio is located on the "toe" of the Italian...