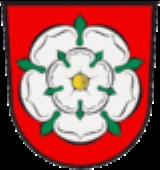 Encyclopedia
Rosenheim is a town in Bavaria
Bavaria
Bavaria, formally the Free State of Bavaria is a state of Germany, located in the southeast of Germany. With an area of , it is the largest state by area, forming almost 20% of the total land area of Germany...
(Germany
Germany
Germany , officially the Federal Republic of Germany , is a federal parliamentary republic in Europe. The country consists of 16 states while the capital and largest city is Berlin. Germany covers an area of 357,021 km2 and has a largely temperate seasonal climate...
) at the confluence of the rivers Inn
Inn River
The Inn is a river in Switzerland, Austria and Germany. It is a right tributary of the Danube and is approximately 500km long. The highest point of its drainage basin is the summit of Piz Bernina, at 4,049 metres.- Geography :...
and Mangfall. It is seat of administration of the district of Rosenheim
Rosenheim (district)
Rosenheim is a Kreis in the south of Bavaria, Germany.Neighboring districts are, clockwise from the west, Miesbach, Munich, Ebersberg, Mühldorf, and Traunstein, with the Austrian province Tirol across the southern border....
, but is not a part of it.

The population of the town proper is approximately 60,000 inhabitants with up to 125,000 in the surrounding area. Rosenheim is situated in the Upper-Bavarian Alpine Foothills
Salzkammergut
The Salzkammergut is a resort area located in Austria. It stretches from City of Salzburg to the Dachstein mountain range, spanning the federal states of Upper Austria , Salzburg , and Styria . The main river of the region is the Traun, a tributary of the Danube...
, 450 meters (1470 ft) above sea level
Above mean sea level
The term above mean sea level refers to the elevation or altitude of any object, relative to the average sea level datum. AMSL is used extensively in radio by engineers to determine the coverage area a station will be able to reach...
and covers an area of 37.52 km². The capital of Bavaria
Bavaria
Bavaria, formally the Free State of Bavaria is a state of Germany, located in the southeast of Germany. With an area of , it is the largest state by area, forming almost 20% of the total land area of Germany...
, Munich
Munich
Munich The city's motto is "" . Before 2006, it was "Weltstadt mit Herz" . Its native name, , is derived from the Old High German Munichen, meaning "by the monks' place". The city's name derives from the monks of the Benedictine order who founded the city; hence the monk depicted on the city's coat...
, is 52 km away in North-West direction from Rosenheim. It has a station
Rosenheim station
Rosenheim station is the largest railway station between Munich and Salzburg / Innsbruck and is located in the centre of the city of Rosenheim in Upper Bavaria, Germany.- Description, Location, Importance and History:...
at the junction of the Munich–Salzburg
Munich–Salzburg railway
The Munich–Salzburg railway is a 153 kilometre-long double-track main line of the German railways. It connects Munich with the line to Vienna at Salzburg. At Rosenheim station, it connects with the line to Kufstein. which continues to Innsbruck and the Brenner line to Italy...
and the Munich–Innsbruck
Rosenheim–Kufstein railway
The Rosenheim–Kufstein railway is a 32 kilometre-long double-track main line of the German railways. It connects the Munich–Salzburg line at Rosenheim with the line to Innsbruck, thus connecting Germany, Salzburg and eastern Austria with Innsbruck and the Brenner line to Italy and the Arlberg line...
lines. 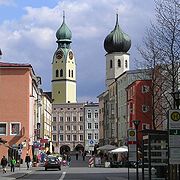 In 1234, Rosenheim was mentioned for the first time as a market. The town's landmark is the gothic spire (65 m) of the parish church St. Nikolaus (1450) with its baroque onion dome
Onion dome
An onion dome is a dome whose shape resembles the onion, after which they are named. Such domes are often larger in diameter than the drum upon which they are set, and their height usually exceeds their width...
(1641).

Rosenheim has very good facilities for studies in the midst of excellent weather conditions. There is a Fachhochschule
Fachhochschule
A Fachhochschule or University of Applied Sciences is a German type of tertiary education institution, sometimes specialized in certain topical areas . Fachhochschulen were founded in Germany and later adopted by Austria, Liechtenstein, Switzerland and Greece...
Rosenheim offering various courses to the students.

Rosenheim is twinned
Town twinning
Twin towns and sister cities are two of many terms used to describe the cooperative agreements between towns, cities, and even counties in geographically and politically distinct areas to promote cultural and commercial ties.- Terminology :...
with: Briançon
Briançon
Briançon a commune in the Hautes-Alpes department in the Provence-Alpes-Côte d'Azur region in southeastern France. It is a sub-prefecture of the department....
, France
France
The French Republic , The French Republic , The French Republic , (commonly known as France , is a unitary semi-presidential republic in Western Europe with several overseas territories and islands located on other continents and in the Indian, Pacific, and Atlantic oceans. Metropolitan France...
, since 1974 Lazise
Lazise
Lazise is a comune in the Province of Verona in the Italian region Veneto, located about 120 km west of Venice and about 20 km northwest of Verona. It is situated on the eastern shore of Lake Garda...
, Italy
Italy
Italy , officially the Italian Republic languages]] under the European Charter for Regional or Minority Languages. In each of these, Italy's official name is as follows:;;;;;;;;), is a unitary parliamentary republic in South-Central Europe. To the north it borders France, Switzerland, Austria and...
, since 1979 Ichikawa, Chiba
Ichikawa, Chiba
is a city located in northwest Chiba, Japan, approximately 20 kilometers from the center of Tokyo. The city was founded on November 3, 1934. As of January 1, 2011, the city has an estimated population of 474,586 and a density of 8,259.42 persons per km². The total area is 57.46 km²...
, Japan
Japan
Japan is an island nation in East Asia. Located in the Pacific Ocean, it lies to the east of the Sea of Japan, China, North Korea, South Korea and Russia, stretching from the Sea of Okhotsk in the north to the East China Sea and Taiwan in the south...
, since 2004.