The word 'down' derives from a medieval Germanic
Germany
Germany , officially the Federal Republic of Germany , is a federal parliamentary republic in Europe. The country consists of 16 states while the capital and largest city is Berlin. Germany covers an area of 357,021 km2 and has a largely temperate seasonal climate...
or Norse word — "dun", a hill.

Chalk deposits are very porous, so the height of the water table
Water table
The water table is the level at which the submarine pressure is far from atmospheric pressure. It may be conveniently visualized as the 'surface' of the subsurface materials that are saturated with groundwater in a given vicinity. However, saturated conditions may extend above the water table as...
in chalk hills rises in winter and falls in summer. This leads to characteristic chalk downland features such as dry valleys or coombe
Coombe
-Places in England:* Coombe, Buckinghamshire* Coombe, Bude, Cornwall* Coombe, Camborne, Cornwall* Coombe, Liskeard, Cornwall* Coombe, Redruth, Cornwall* Coombe, St...
s, and seasonally-flowing streams or winterbournes
Winterbourne (stream)
A winterbourne is a stream or river that is dry through the summer months. A winterbourne is sometimes simply called a bourne, from the Anglo-Saxon for a stream flowing from a spring, although this term can also be used for all-year water courses....
. The modern practice of extracting water from this 'reservoir', in order to satisfy demand for water, may be putting some of these streams under extreme stress.

In the valleys below the downs there is typically a clay
Clay
Clay is a general term including many combinations of one or more clay minerals with traces of metal oxides and organic matter. Geologic clay deposits are mostly composed of phyllosilicate minerals containing variable amounts of water trapped in the mineral structure.- Formation :Clay minerals...
soil, and at the interface between the two a springline can occur where water emerges from the porous chalk. Along this line, settlements and farms were often built, as on the higher land no water was available. This is demonstrated very clearly beneath the scarp
Escarpment
An escarpment is a steep slope or long cliff that occurs from erosion or faulting and separates two relatively level areas of differing elevations.-Description and variants:...
of the White Horse Hills, above the Vale of White Horse
Vale of White Horse
The Vale of White Horse is a local government district of Oxfordshire in England. The main town is Abingdon, other places include Faringdon and Wantage. There are 68 parishes within the district...
. In many chalk downland areas there is no surface water at all other than artificially created dewponds.

The soil profile of chalk downland in England is a thin soil overlaying the parent
Parent material
In soil science, parent material is the underlying geological material in which soil horizons form...
chalk
Chalk
Chalk is a soft, white, porous sedimentary rock, a form of limestone composed of the mineral calcite. Calcite is calcium carbonate or CaCO3. It forms under reasonably deep marine conditions from the gradual accumulation of minute calcite plates shed from micro-organisms called coccolithophores....
. Weathering of the chalk has created a characteristic soil known as rendzina
Rendzina
Rendzina is a dark, grayish-brown, humus-rich, intrazonal soil. It is one of the soils most closely associated with the bedrock type and an example of initial stages of soil development...
. Unlike many soils in which there are easily distinguished layers or soil horizon
Soil horizon
A soil horizon is a specific layer in the land area that is parallel to the soil surface and possesses physical characteristics which differ from the layers above and beneath. Horizon formation is a function of a range of geological, chemical, and biological processes and occurs over long time...
s, a chalk rendzina soil consists of only a shallow dark humus rich surface layer which grades through a lighter brown hillwash containing small pellets of chalk, to the white of the chalk itself. This is largely because of the purity of the chalk which is here about 98% calcium carbonate
Calcium carbonate
Calcium carbonate is a chemical compound with the formula CaCO3. It is a common substance found in rocks in all parts of the world, and is the main component of shells of marine organisms, snails, coal balls, pearls, and eggshells. Calcium carbonate is the active ingredient in agricultural lime,...
and the consequent absence of soil-building clay
Clay
Clay is a general term including many combinations of one or more clay minerals with traces of metal oxides and organic matter. Geologic clay deposits are mostly composed of phyllosilicate minerals containing variable amounts of water trapped in the mineral structure.- Formation :Clay minerals...
minerals which are abundant, for example, in valley floors.

Steep slopes on chalk downland develop a ribbed pattern of grass covered horizontal steps a foot or two high. Although subsequently emphasised by cattle and sheep walking along them, these terracettes (commonly known as sheep tracks) were formed by the movement of soil downhill, a process known as soil creep. 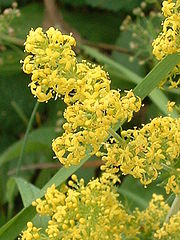