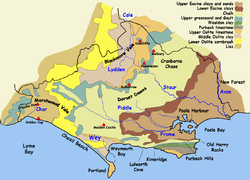 The Dorset Downs are an area of Chalk
Chalk
Chalk is a soft, white, porous sedimentary rock, a form of limestone composed of the mineral calcite. Calcite is calcium carbonate or CaCO3. It forms under reasonably deep marine conditions from the gradual accumulation of minute calcite plates shed from micro-organisms called coccolithophores....
downland
Downland
A downland is an area of open chalk hills. This term is especially used to describe the chalk countryside in southern England. Areas of downland are often referred to as Downs....
in the centre of the county Dorset
Dorset
Dorset , is a county in South West England on the English Channel coast. The county town is Dorchester which is situated in the south. The Hampshire towns of Bournemouth and Christchurch joined the county with the reorganisation of local government in 1974...
in south west England
England
England is a country that is part of the United Kingdom. It shares land borders with Scotland to the north and Wales to the west; the Irish Sea is to the north west, the Celtic Sea to the south west, with the North Sea to the east and the English Channel to the south separating it from continental...
. The downs are the most western part of a larger Chalk Formation
Chalk Formation
The Chalk Group is a lithostratigraphic unit in the northwestern part of Europe. It is characterised by thick deposits of chalk, a soft porous white limestone, deposited in a marine environment during the Upper Cretaceous period.Chalk is a limestone that consists of coccolith biomicrite...
which also includes (from West to East) Cranborne Chase
Cranborne Chase
Cranborne Chase is a Chalk plateau in central southern England, straddling the counties Dorset, Hampshire and Wiltshire. The plateau is part of the English Chalk Formation and is adjacent to Salisbury Plain and the West Wiltshire Downs in the north, the Dorset Downs to the south west and the...
, Salisbury Plain
Salisbury Plain
Salisbury Plain is a chalk plateau in central southern England covering . It is part of the Southern England Chalk Formation and largely lies within the county of Wiltshire, with a little in Hampshire. The plain is famous for its rich archaeology, including Stonehenge, one of England's best known...
, Hampshire Downs, Chiltern Hills
Chiltern Hills
The Chiltern Hills form a chalk escarpment in South East England. They are known locally as "the Chilterns". A large portion of the hills was designated officially as an Area of Outstanding Natural Beauty in 1965.-Location:...
, North Downs
North Downs
The North Downs are a ridge of chalk hills in south east England that stretch from Farnham in Surrey to the White Cliffs of Dover in Kent. The North Downs lie within two Areas of Outstanding Natural Beauty , the Surrey Hills and the Kent Downs...
and South Downs
South Downs
The South Downs is a range of chalk hills that extends for about across the south-eastern coastal counties of England from the Itchen Valley of Hampshire in the west to Beachy Head, near Eastbourne, East Sussex, in the east. It is bounded on its northern side by a steep escarpment, from whose...
.

The Dorset Downs are bounded on the north, along the steep scarp
Escarpment
An escarpment is a steep slope or long cliff that occurs from erosion or faulting and separates two relatively level areas of differing elevations.-Description and variants:...
face, by the Blackmore Vale
Blackmore Vale
The Blackmore Vale is a vale, or wide valley, in north Dorset, and to a lesser extent south Somerset and southwest Wiltshire in southern England. The vale is part of the Stour valley...
, a large clay
Clay
Clay is a general term including many combinations of one or more clay minerals with traces of metal oxides and organic matter. Geologic clay deposits are mostly composed of phyllosilicate minerals containing variable amounts of water trapped in the mineral structure.- Formation :Clay minerals...
and limestone
Limestone
Limestone is a sedimentary rock composed largely of the minerals calcite and aragonite, which are different crystal forms of calcium carbonate . Many limestones are composed from skeletal fragments of marine organisms such as coral or foraminifera....
valley
Valley
In geology, a valley or dale is a depression with predominant extent in one direction. A very deep river valley may be called a canyon or gorge.The terms U-shaped and V-shaped are descriptive terms of geography to characterize the form of valleys...
. On the east the Downs would once, thousands of years ago, have been continuous with Cranborne Chase, but the River Stour
River Stour, Dorset
The River Stour is a 60.5 mile long river which flows through Wiltshire and Dorset in southern England, and drains into the English Channel. It is sometimes called the Dorset Stour to distinguish it from rivers of the same name...
now cuts a valley between them, which is the location of Blandford Forum and the eastern boundary of the downs. From the northern scarp face, the hills dip gently southwards before the chalk disappears beneath the Bagshot Beds
Bagshot Beds
In geology, the Bagshot Beds are a series of sands and clays of shallow-water origin, some being fresh-water, some marine. They belong to the upper Eocene formation of the London and Hampshire basins, in England and derive their name from Bagshot Heath in Surrey. They are also well developed in...
which form the heathlands of the county, between Dorchester and Wareham
Wareham, Dorset
Wareham is an historic market town and, under the name Wareham Town, a civil parish, in the English county of Dorset. The town is situated on the River Frome eight miles southwest of Poole.-Situation and geography:...
. South of the River Frome, the chalk reappears in a narrower strip, forming coastal cliffs east of Weymouth and, further east, the steep ridge of the Purbeck Hills
Purbeck Hills
The Purbeck Hills and South Dorset Downs are a ridge of chalk downs in Dorset, England. The hills extend from the Dorset Downs west of Dorchester, where the River Frome begins to form a valley dividing them from the larger area of downland to the north. The ridge then runs east through the Isle...
. This southerly strip of the visible chalk (sometimes referred to as the South Dorset Downs or South Dorset Ridgeway) continues westwards behind Weymouth, and rejoins the main body of the Downs at their western extremity at Eggardon Hill
Eggardon Hill
Eggardon Hill is located on chalk uplands approximately four miles to the east of Bridport, in the English county of Dorset. It stands 250 metres above sea level, and provides panoramic views to the south, north and west...
. In the west the chalk dips down under Marl
Marl
Marl or marlstone is a calcium carbonate or lime-rich mud or mudstone which contains variable amounts of clays and aragonite. Marl was originally an old term loosely applied to a variety of materials, most of which occur as loose, earthy deposits consisting chiefly of an intimate mixture of clay...
.

The main land uses on the downs are as arable
Arable land
In geography and agriculture, arable land is land that can be used for growing crops. It includes all land under temporary crops , temporary meadows for mowing or pasture, land under market and kitchen gardens and land temporarily fallow...
agriculture
Agriculture
Agriculture is the cultivation of animals, plants, fungi and other life forms for food, fiber, and other products used to sustain life. Agriculture was the key implement in the rise of sedentary human civilization, whereby farming of domesticated species created food surpluses that nurtured the...
, woodland
Woodland
Ecologically, a woodland is a low-density forest forming open habitats with plenty of sunlight and limited shade. Woodlands may support an understory of shrubs and herbaceous plants including grasses. Woodland may form a transition to shrubland under drier conditions or during early stages of...
and calcareous grassland
Calcareous grassland
Calcareous grassland is an ecosystem associated with thin basic soil, such as that on chalk and limestone downland. Plants on calcareous grassland are typically short and hardy, and include grasses and herbs such as clover...
, a habitat
Habitat (ecology)
A habitat is an ecological or environmental area that is inhabited by a particular species of animal, plant or other type of organism...
which is growing as farmers are encouraged with set-aside
Set-aside
Set-aside was introduced as a political measure by the European Union in 1988 to help reduce the large and costly surpluses produced in Europe under the guaranteed price system of the Common Agricultural Policy ; and to deliver some environmental benefits following considerable damage to...
subsidies
Agricultural subsidy
An agricultural subsidy is a governmental subsidy paid to farmers and agribusinesses to supplement their income, manage the supply of agricultural commodities, and influence the cost and supply of such commodities...
. Chalk is a rough rock and the Dorset Downs hold a large water table
Water table
The water table is the level at which the submarine pressure is far from atmospheric pressure. It may be conveniently visualized as the 'surface' of the subsurface materials that are saturated with groundwater in a given vicinity. However, saturated conditions may extend above the water table as...
which acts as a reservoir of drinking water for much of the county. This property of chalk also means there are many seasonal rivers, called winterbourne
Winterbourne (stream)
A winterbourne is a stream or river that is dry through the summer months. A winterbourne is sometimes simply called a bourne, from the Anglo-Saxon for a stream flowing from a spring, although this term can also be used for all-year water courses....
s, that flows depending upon the level of the water table.