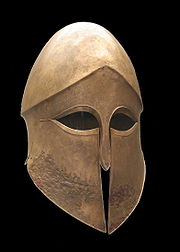 A combat helmet or battle helmet is a type of personal armor
Personal armor
Personal armor is the whole of protecting clothing, designed to absorb and/or deflect slashing, bludgeoning, and penetrating attacks. They were historically used to protect soldiers, whereas today, they are also used to protect police forces, private citizens and private security guards or...
designed specifically to protect the head during combat
Combat
Combat, or fighting, is a purposeful violent conflict meant to establish dominance over the opposition, or to terminate the opposition forever, or drive the opposition away from a location where it is not wanted or needed....
. Helmets are among the oldest forms of personal protective equipment
Personal protective equipment
Personal protective equipment refers to protective clothing, helmets, goggles, or other garment or equipment designed to protect the wearer's body from injury by blunt impacts, electrical hazards, heat, chemicals, and infection, for job-related occupational safety and health purposes, and in...
and are known to have been worn by the Akkadians/Sumerians in the 23rd century BC, Mycenaean Greeks
Mycenaean Greece
Mycenaean Greece was a cultural period of Bronze Age Greece taking its name from the archaeological site of Mycenae in northeastern Argolis, in the Peloponnese of southern Greece. Athens, Pylos, Thebes, and Tiryns are also important Mycenaean sites...
since 17th century BC, the Assyrians around 900 BC, ancient Greeks and Romans
Ancient Rome
Ancient Rome was a thriving civilization that grew on the Italian Peninsula as early as the 8th century BC. Located along the Mediterranean Sea and centered on the city of Rome, it expanded to one of the largest empires in the ancient world....
, throughout the Middle Ages
Middle Ages
The Middle Ages is a periodization of European history from the 5th century to the 15th century. The Middle Ages follows the fall of the Western Roman Empire in 476 and precedes the Early Modern Era. It is the middle period of a three-period division of Western history: Classic, Medieval and Modern...
, and up to the end of the 17th century by many combatants. Their materials and construction became more advanced as weapons became more and more powerful. Initially constructed from leather
Leather
Leather is a durable and flexible material created via the tanning of putrescible animal rawhide and skin, primarily cattlehide. It can be produced through different manufacturing processes, ranging from cottage industry to heavy industry.-Forms:...
and brass
Brass
Brass is an alloy of copper and zinc; the proportions of zinc and copper can be varied to create a range of brasses with varying properties.In comparison, bronze is principally an alloy of copper and tin...
, and then bronze
Bronze
Bronze is a metal alloy consisting primarily of copper, usually with tin as the main additive. It is hard and brittle, and it was particularly significant in antiquity, so much so that the Bronze Age was named after the metal...
and iron
Iron
Iron is a chemical element with the symbol Fe and atomic number 26. It is a metal in the first transition series. It is the most common element forming the planet Earth as a whole, forming much of Earth's outer and inner core. It is the fourth most common element in the Earth's crust...
during the Bronze
Bronze Age
The Bronze Age is a period characterized by the use of copper and its alloy bronze as the chief hard materials in the manufacture of some implements and weapons. Chronologically, it stands between the Stone Age and Iron Age...
and Iron
Iron Age
The Iron Age is the archaeological period generally occurring after the Bronze Age, marked by the prevalent use of iron. The early period of the age is characterized by the widespread use of iron or steel. The adoption of such material coincided with other changes in society, including differing...
Ages, they soon came to be made entirely from forged steel
Steel
Steel is an alloy that consists mostly of iron and has a carbon content between 0.2% and 2.1% by weight, depending on the grade. Carbon is the most common alloying material for iron, but various other alloying elements are used, such as manganese, chromium, vanadium, and tungsten...
in many societies after about 950AD. At that time, they were purely military equipment, protecting the head from cutting blows with sword
Sword
A sword is a bladed weapon used primarily for cutting or thrusting. The precise definition of the term varies with the historical epoch or the geographical region under consideration...
s, flying arrow
Arrow
An arrow is a shafted projectile that is shot with a bow. It predates recorded history and is common to most cultures.An arrow usually consists of a shaft with an arrowhead attached to the front end, with fletchings and a nock at the other.- History:...
s, and low-velocity musket
Musket
A musket is a muzzle-loaded, smooth bore long gun, fired from the shoulder. Muskets were designed for use by infantry. A soldier armed with a musket had the designation musketman or musketeer....
ry. 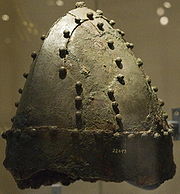 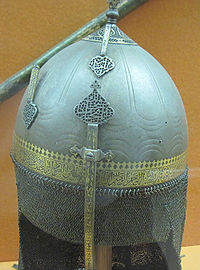 Military use of helmets declined after 1670, and rifled firearms ended their use by foot soldiers after 1700. By the 18th century, cavalry units often wore steel body cuirasses, and frequently metal skull protectors under their hats, called "secrets". The Prussian leather spiked helmet, or Pickelhaube
Pickelhaube
The Pickelhaube , also "Pickelhelm," was a spiked helmet worn in the 19th and 20th centuries by German military, firefighters, and police...
, offered almost no protection from the increased use of artillery during World War I
World War I
World War I , which was predominantly called the World War or the Great War from its occurrence until 1939, and the First World War or World War I thereafter, was a major war centred in Europe that began on 28 July 1914 and lasted until 11 November 1918...
, and in 1916 was replaced by the German steel helmet, or Stahlhelm
Stahlhelm
Stahlhelm is German for "steel helmet". The Imperial German Army began to replace the traditional boiled-leather Pickelhaube with the Stahlhelm during World War I in 1916...
, and afterwards was worn merely for tradition.

The Napoleonic era saw ornate cavalry helmets reintroduced for cuirassier
Cuirassier
Cuirassiers were mounted cavalry soldiers equipped with armour and firearms, first appearing in late 15th-century Europe. They were the successors of the medieval armoured knights...
s and dragoon
Dragoon
The word dragoon originally meant mounted infantry, who were trained in horse riding as well as infantry fighting skills. However, usage altered over time and during the 18th century, dragoons evolved into conventional light cavalry units and personnel...
s in some armies; they continued to be used by French forces during World War I
World War I
World War I , which was predominantly called the World War or the Great War from its occurrence until 1939, and the First World War or World War I thereafter, was a major war centred in Europe that began on 28 July 1914 and lasted until 11 November 1918...
as late as 1915, when they were replaced by the new French Adrian helmet
Adrian helmet
The M15 Adrian helmet was a combat helmet issued to the French Army during World War I. It was the first standard helmet of the French Army and was designed when millions of French troops were engaged in trench warfare, and head wounds became a frequent cause of battlefield casualties...
. The French Adrian helmet was the first modern steel helmet and was soon followed by the adoption of similar steel helmets by the other warring nations. 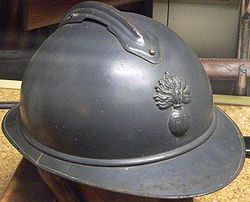 World War I and its increased use of artillery had renewed the need for steel helmets, which were quickly introduced by all the combatant nations for their foot soldiers. In the 20th century, such helmets offered protection for the head from shrapnel and fragments.

Today's militaries often use high-quality helmets made of ballistic materials such as Kevlar
Kevlar
Kevlar is the registered trademark for a para-aramid synthetic fiber, related to other aramids such as Nomex and Technora. Developed at DuPont in 1965, this high strength material was first commercially used in the early 1970s as a replacement for steel in racing tires...
and Aramid
Aramid
Aramid fibers are a class of heat-resistant and strong synthetic fibers. They are used in aerospace and military applications, for ballistic rated body armor fabric and ballistic composites, in bicycle tires, and as an asbestos substitute. The name is a portmanteau of "aromatic polyamide"...
, which offer improved protection. Some helmets also have good non-ballistic protective qualities, though many do not. Non-ballistic injuries may be caused by many things, such as concussive shock wave
Shock wave
A shock wave is a type of propagating disturbance. Like an ordinary wave, it carries energy and can propagate through a medium or in some cases in the absence of a material medium, through a field such as the electromagnetic field...
s from explosion
Explosion
An explosion is a rapid increase in volume and release of energy in an extreme manner, usually with the generation of high temperatures and the release of gases. An explosion creates a shock wave. If the shock wave is a supersonic detonation, then the source of the blast is called a "high explosive"...
s, physical attacks, motor vehicle accidents, or falls. 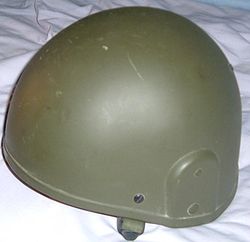