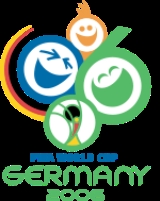 Overview
The 2006 FIFA World Cup was the 18th FIFA World Cup
FIFA World Cup
The FIFA World Cup, often simply the World Cup, is an international association football competition contested by the senior men's national teams of the members of Fédération Internationale de Football Association , the sport's global governing body...
, the quadrennial international football
Football (soccer)
Association football, more commonly known as football or soccer, is a sport played between two teams of eleven players with a spherical ball...
world championship tournament. It was held from 9 June to 9 July 2006 in Germany
Germany
Germany , officially the Federal Republic of Germany , is a federal parliamentary republic in Europe. The country consists of 16 states while the capital and largest city is Berlin. Germany covers an area of 357,021 km2 and has a largely temperate seasonal climate...
, which won the right to host the event in July 2000. Teams representing 198 national football associations from all six populated continents participated in the qualification
2006 FIFA World Cup qualification
A total of 197 teams entered the qualification process for the 2006 FIFA World Cup, competing for a total of 32 spots in the final tournament. Germany, as the host, qualified automatically, leaving 31 spots open for competition...
process which began in September 2003. Thirty-one teams qualified from this process, along with the host nation, Germany
Germany national football team
The Germany national football team is the football team that has represented Germany in international competition since 1908. It is governed by the German Football Association , which was founded in 1900....
, for the finals tournament.

Italy
Italy national football team
The Italy National Football Team , represents Italy in association football and is controlled by the Italian Football Federation , the governing body for football in Italy. Italy is the second most successful national team in the history of the World Cup having won four titles , just one fewer than...
won the tournament, claiming their fourth World Cup title.

Hi When the host country was chosen for the 2006 world cup-it took three rounds to determine germany as the eventual winner.Can anybody tell me if the...
More
x