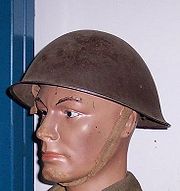 The Mk III Helmet was a steel military combat helmet
Combat helmet
A combat helmet or battle helmet is a type of personal armor designed specifically to protect the head during combat. Helmets are among the oldest forms of personal protective equipment and are known to have been worn by the Akkadians/Sumerians in the 23rd century BC, Mycenaean Greeks since 17th...
developed for the British Army
British Army
The British Army is the land warfare branch of Her Majesty's Armed Forces in the United Kingdom. It came into being with the unification of the Kingdom of England and Scotland into the Kingdom of Great Britain in 1707. The new British Army incorporated Regiments that had already existed in England...
in 1941. First worn in combat by British and Canadian
Canada
Canada is a North American country consisting of ten provinces and three territories. Located in the northern part of the continent, it extends from the Atlantic Ocean in the east to the Pacific Ocean in the west, and northward into the Arctic Ocean...
troops on D-Day
D-Day
D-Day is a term often used in military parlance to denote the day on which a combat attack or operation is to be initiated. "D-Day" often represents a variable, designating the day upon which some significant event will occur or has occurred; see Military designation of days and hours for similar...
, the Mk III was used alongside the Brodie helmet
Brodie helmet
The Brodie helmet, called Helmet, steel, Mark I helmet in Britain and the M1917 Helmet in the U.S., was a steel combat helmet designed and patented in 1915 by the Briton John Leopold Brodie...
for the remainder of the Second World War. It is sometimes referred to as the "turtle" helmet by collectors, because of its vague resemblance to a turtle
Turtle
Turtles are reptiles of the order Testudines , characterised by a special bony or cartilaginous shell developed from their ribs that acts as a shield...
shell.

The Mk III gradually replaced the Brodie helmet from 1944 onwards. The Mk III was itself replaced after the war by the Mark IV helmet, which it closely resembled. The differences were that the rivets attaching the chinstrap to the helmet were placed much lower down on the shell and the use of a 'lift the dot' fastener for the liner. These modifications allowed the Mk IV to be utilised for carrying water. The Mark IV helmet was eventually replaced by the Mark V, which looked similar to the MK IV, but had a more padded liner. The Mark V was used until the late-1980s at which point the British replaced all steel helmets with the Mark 6
Mk. 6 Helmet
The Mk. 6 helmet is the standard combat helmet of the British Armed Forces. The Mk6 replaced the Mk. 5 Helmet in service from 1986 and is designed to accept modern ear protection, personal radios, and respirators...
, which was made from nylon fiber.
The source of this article is wikipedia, the free encyclopedia.  The text of this article is licensed under the GFDL.