Encyclopedia
Personnel Armor System for Ground Troops, sometimes abbreviated to PASGT, was a combat helmet
Combat helmet
A combat helmet or battle helmet is a type of personal armor designed specifically to protect the head during combat. Helmets are among the oldest forms of personal protective equipment and are known to have been worn by the Akkadians/Sumerians in the 23rd century BC, Mycenaean Greeks since 17th...
and ballistic vest used by the American military from the mid 1980s until 2005, when the system was succeeded by the Lightweight Helmet
Lightweight Helmet
The Lightweight Helmet is the U.S. Marine Corps replacement for the PASGT combat helmet. As it is nearly identical to untrained eyes in shape to the PASGT, it is still called the Fritz helmet or K-pot...
, Modular Integrated Communications Helmet, and Interceptor body armor
Interceptor body armor
Interceptor Body Armor is the United States Army's primary bulletproof vest. The Interceptor design replaced the older fragmentation protective Personnel Armor System for Ground Troops body armor system, introduced in the early 1980s...
.

The Personnel Armor System Ground Troops Helmet, most commonly known as the "Kevlar", but also referred to as the "K-pot" (an update of the colloquial term "steel pot" for the M1 steel combat helmet in use from WWII until the 1980s) and less commonly the "Fritz" helmet
Helmet
A helmet is a form of protective gear worn on the head to protect it from injuries.Ceremonial or symbolic helmets without protective function are sometimes used. The oldest known use of helmets was by Assyrian soldiers in 900BC, who wore thick leather or bronze helmets to protect the head from...
for its resemblance to the World War II German army helmet
Stahlhelm
Stahlhelm is German for "steel helmet". The Imperial German Army began to replace the traditional boiled-leather Pickelhaube with the Stahlhelm during World War I in 1916...
, is a standard infantry combat wear in the U.S. Military
United States armed forces
The United States Armed Forces are the military forces of the United States. They consist of the Army, Navy, Marine Corps, Air Force, and Coast Guard.The United States has a strong tradition of civilian control of the military...
. The shell is made from 29 layers of Kevlar
Kevlar
Kevlar is the registered trademark for a para-aramid synthetic fiber, related to other aramids such as Nomex and Technora. Developed at DuPont in 1965, this high strength material was first commercially used in the early 1970s as a replacement for steel in racing tires...
, a ballistic aramid
Aramid
Aramid fibers are a class of heat-resistant and strong synthetic fibers. They are used in aerospace and military applications, for ballistic rated body armor fabric and ballistic composites, in bicycle tires, and as an asbestos substitute. The name is a portmanteau of "aromatic polyamide"...
fabric treated with a phenolic resin system and is rated at a Threat Level II, and offers protection against shrapnel and ballistic
Projectile
A projectile is any object projected into space by the exertion of a force. Although a thrown baseball is technically a projectile too, the term more commonly refers to a weapon....
threats. It meets the 1800 requirement of MIL-STD-662 E. It weighs from 3.1 lb (1,406.1 g) (size extra small) to 4.2 lb (1,905.1 g) (extra large).

The PASGT Helmet is typically olive drab in color and can be fitted with cloth helmet cover
Helmet cover
The helmet cover was first used by French soldiers during World War I.Helmet covers are usually made out of canvas or cotton and come in many camouflage designs, for example: woodland, desert or urban, and different camouflage patterns like MARPAT, CADPAT and ACUPAT. It can also be used for UN...
s in varying camouflage patterns, which have included M81 Woodland
M81 Woodland
Woodland pattern is the name of the default camouflage pattern issued to United States soldiers, Marines, airmen, and sailors from 1981, with the issue of the M81 Battle Dress Uniform until nearly the present day...
, six-color desert, and three-color desert (as shown above), solid black (for SWAT
SWAT
A SWAT team is an elite tactical unit in various national law enforcement departments. They are trained to perform high-risk operations that fall outside of the abilities of regular officers...
teams), as well as the new Marine Corps MARPAT
MARPAT
MARPAT is a digital camouflage pattern in use with the United States Marine Corps, introduced with the Marine Corps Combat Utility Uniform , which replaced the Camouflage Utility Uniform. The pattern is formed by a number of small rectangular pixels of color...
and Army UCP
Universal Camouflage Pattern
The Universal Camouflage Pattern , also referred to as ACUPAT or Digital Camouflage is the military camouflage pattern currently in use in the United States Army's Army Combat Uniform. The pattern was chosen after several laboratory and field tests that occurred from 2003 to 2004...
designs. The helmet is also used by various SWAT teams, wherein it is often black with or without covering, as well as by various United Nations
United Nations
The United Nations is an international organization whose stated aims are facilitating cooperation in international law, international security, economic development, social progress, human rights, and achievement of world peace...
Peacekeeping
Peacekeeping
Peacekeeping is an activity that aims to create the conditions for lasting peace. It is distinguished from both peacebuilding and peacemaking....
forces where it is often painted robin's egg blue to match the UN flag. When worn with a helmet cover, it is also often fitted with a band around it that has two reflective patches (sometimes known as cat eyes) on the rear intended to reduce friendly fire
Friendly fire
Friendly fire is inadvertent firing towards one's own or otherwise friendly forces while attempting to engage enemy forces, particularly where this results in injury or death. A death resulting from a negligent discharge is not considered friendly fire...
incidents. These bands are also used to hold vegetation or small personal items, as with the M1 helmet before it during the later decades of its service life. These bands can also have names and/or blood type
Blood type
A blood type is a classification of blood based on the presence or absence of inherited antigenic substances on the surface of red blood cells . These antigens may be proteins, carbohydrates, glycoproteins, or glycolipids, depending on the blood group system...
s printed on them to help identify the wearer. Some PASGT helmets also featured a patch with the wearer's rank insignia on it stitched to the front, and/or a second patch showing the symbol of his/her unit on the sides.

Available add-ons include a Helmet Mount Assembly that allows attachment of NE-6015 (AN/PVS-14
AN/PVS-14
The AN/PVS-14 Monocular Night Vision Device is in widespread use by US Armed Forces as well as NATO allies around the world. It uses a third generation image intensifier tube, and is manufactured by Litton Industries as well as the ITT Corporation...
MNVD) or F5001B (AN/PVS-7B) night vision goggles
Night vision goggles
A night vision device is an optical instrument that allows images to be produced in levels of light approaching total darkness. They are most often used by the military and law enforcement agencies, but are available to civilian users...
. It can also be fitted with an acrylic glass
Acrylic glass
Poly is a transparent thermoplastic, often used as a light or shatter-resistant alternative to glass. It is sometimes called acrylic glass. Chemically, it is the synthetic polymer of methyl methacrylate...
visor for use in riot control
Riot control
Riot control refers to the measures used by police, military, or other security forces to control, disperse, and arrest civilians who are involved in a riot, demonstration, or protest. Law enforcement officers or soldiers have long used non-lethal weapons such as batons and whips to disperse crowds...
operations.

In a demonstration of the Heckler & Koch MP7
Heckler & Koch MP7
The MP7 is a German submachine gun manufactured by Heckler & Koch and chambered for the 4.6×30mm cartridge. It was designed with the new cartridge to meet NATO requirements published in 1989, as these requirements call for a personal defense weapon class firearm, with a greater ability to defeat...
on the Discovery Channel
Discovery Channel
Discovery Channel is an American satellite and cable specialty channel , founded by John Hendricks and distributed by Discovery Communications. It is a publicly traded company run by CEO David Zaslav...
show Future Weapons
Future Weapons
Future Weapons, sometimes also written as FutureWeapons and Futureweapons, is a documentary television series that premiered on April 19, 2006 on the Discovery Channel. Host Richard "Mack" Machowicz, a former Navy SEAL, reviews and demonstrates the latest modern weaponry and military technology...
, a PASGT helmet suffered a catastrophic armor penetration when hit head-on with one round of the MP7's 4.6x30mm ammunition. Similarly, the firearms testing site The Box o' Truth has reported that a 7.62x25mm Tokarev fired from a ČZ vz. 52 handgun was able to penetrate the helmet at 25 feet (7.6 m). In the same test, both the 5.56x45mm NATO
5.56x45mm NATO
5.56×45mm NATO is a rifle cartridge developed in the United States and originally chambered in the M16 rifle. Under STANAG 4172, it is a standard cartridge for NATO forces as well as many non-NATO countries. It is derived from, but not identical to, the .223 Remington cartridge...
and the 7.62x39mm were able to yield catastrophic penetrations through both sides of the helmet. 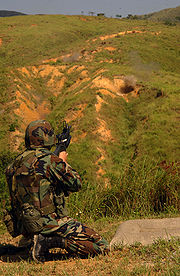 The Personnel Armor System for Ground Troops Vest, also known as the "flak vest", was the United States Military's standard upper torso body armor from the early 1980s until approximately 2004, when it was replaced by the Interceptor body armor
Interceptor body armor
Interceptor Body Armor is the United States Army's primary bulletproof vest. The Interceptor design replaced the older fragmentation protective Personnel Armor System for Ground Troops body armor system, introduced in the early 1980s...
. The PASGT Vest replaced the Vietnam War-era M-69 Fragmentation Protective Body Armor nylon vest, which in turn replaced the Korean War-era M-1952A Fragmentation Protective Body Armor. The PASGT Vest used Kevlar
Kevlar
Kevlar is the registered trademark for a para-aramid synthetic fiber, related to other aramids such as Nomex and Technora. Developed at DuPont in 1965, this high strength material was first commercially used in the early 1970s as a replacement for steel in racing tires...
for the first time in the United States military's body armor, unlike the ballistic nylon used in the previous two models. While incapable of stopping rifle bullets, the PASGT Vest provided better protection against shrapnel and reduced the severity of injuries from small arms fire when compared to the M-69. Anecdotally, it provides roughly level IIIA ballistic protection, not accounting for blunt force injuries, stopping rounds as powerful as a .44 magnum from a handgun in certain test methodologies, while being penetrated by 9mm FMJ in others. Despite this, the vest was only ever designed or intended to stop small fragments without injury to the user; NIJ class 1 protection might be a more accurate assessment, were back-face deformation measured. The PASGT Vest weighed approximately 9 lb (4,082.3 g), a small increase over the previous model.

In order to provide protection against high velocity bullets, the PASGT Vest was, in 1996, combined with the Interim Small Arms Protective Overvest (ISAPO) pending adoption of Interceptor body armor
Interceptor body armor
Interceptor Body Armor is the United States Army's primary bulletproof vest. The Interceptor design replaced the older fragmentation protective Personnel Armor System for Ground Troops body armor system, introduced in the early 1980s...
. The ISAPO weighed about 16.5 lb (7,484.3 g) and consisted of a carrier to hold two protective ceramic plate inserts. A PASGT armor system with overvest weighed more than 25 lb (11,339.8 g) and was criticized by many US troops as unacceptably cumbersome in combat. The ballistic fill consists of 13 plies of 14 oz. water repellent treated Aramid (Kevlar 29) fabric. The inner and outer cover, shoulder pads and front closure flap of the vest are water repellent treated 8 oz. ballistic nylon cloth. While phased out as frontline body armor by the time of the 2003 Iraq War, some Army units would use old PASGT Vests as makeshift armor for their vehicles in the absence of purpose-made up-armor kits.