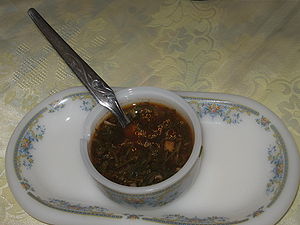 Chimichurri or Chimmichurri is a variant of green sauce
Green Sauce
Green sauce is the name of several different sauces containing mainly herbs, namely the Italian salsa verde, the French sauce verte, the Spanish salsa verde and the German Grüne Soße or Frankfurter Grie Soß .- History :...
, though there is a red version as well , also used as a marinade, for grilled meat
Meat
Meat is animal flesh that is used as food. Most often, this means the skeletal muscle and associated fat and other tissues, but it may also describe other edible tissues such as organs and offal...
. It is originally from Argentina
Argentina
Argentina , officially the Argentine Republic , is the second largest country in South America by land area, after Brazil. It is constituted as a federation of 23 provinces and an autonomous city, Buenos Aires...
but is also used in Uruguay and in countries as far north as Nicaragua
Nicaragua
Nicaragua is the largest country in the Central American American isthmus, bordered by Honduras to the north and Costa Rica to the south. The country is situated between 11 and 14 degrees north of the Equator in the Northern Hemisphere, which places it entirely within the tropics. The Pacific Ocean...
, Colombia
Colombia
Colombia, officially the Republic of Colombia , is a unitary constitutional republic comprising thirty-two departments. The country is located in northwestern South America, bordered to the east by Venezuela and Brazil; to the south by Ecuador and Peru; to the north by the Caribbean Sea; to the...
and Mexico
Mexico
The United Mexican States , commonly known as Mexico , is a federal constitutional republic in North America. It is bordered on the north by the United States; on the south and west by the Pacific Ocean; on the southeast by Guatemala, Belize, and the Caribbean Sea; and on the east by the Gulf of...
.

The word chimichurri or chirriburri is attested in 1783 as a person's nickname, making etymologies based on corruption of English names unlikely, but it is unclear how the nickname is related to the food.

There are various stories about the origin of the word. One claims that it comes from 'Jimmy McCurry', an Irish
Ireland
Ireland is an island to the northwest of continental Europe. It is the third-largest island in Europe and the twentieth-largest island on Earth...
man in the service of General Belgrano
Manuel Belgrano
Manuel José Joaquín del Corazón de Jesús Belgrano , usually referred to as Manuel Belgrano, was an Argentine economist, lawyer, politician, and military leader. He took part in the Argentine Wars of Independence and created the Flag of Argentina...
; his sauce was popular and the recipe was passed on. However, 'Jimmy McCurry' was difficult for the native people to say. Some claim Jimmy's sauce's name was corrupted to 'chimichurri', while others say it was changed in his honor.

Other similar stories involve Jimmy Curry, an English meat importer; a Scot
Scot
A Scot is a member of an ethnic group indigenous to Scotland, derived from the Latin name of Irish raiders, the Scoti.Scot may also refer to:People with the given name Scot:* Scot Brantley , American football linebacker...
, James C. Hurray, travelling with gaucho
Gaucho
Gaucho is a term commonly used to describe residents of the South American pampas, chacos, or Patagonian grasslands, found principally in parts of Argentina, Uruguay, Southern Chile, and Southern Brazil...
s; and an English family in Patagonia
Patagonia
Patagonia is a region located in Argentina and Chile, integrating the southernmost section of the Andes mountains to the southwest towards the Pacific ocean and from the east of the cordillera to the valleys it follows south through Colorado River towards Carmen de Patagones in the Atlantic Ocean...
overheard by the group of Argentinians that were with them while saying "give me the curry". All the stories share an English
English language
English is a West Germanic language that arose in the Anglo-Saxon kingdoms of England and spread into what was to become south-east Scotland under the influence of the Anglian medieval kingdom of Northumbria...
speaking colonist and the corruption of names or words by the local population.

The Argentine gourmet Miguel Brascó claims that the word chimichurri originated when the British were captured after England tried to invade the Spanish colony of Argentina. The prisoners asked for condiment for their food mixing English, aboriginal and Spanish (castilian) words. Che-mi-curry stands for "che mi salsa" (dame condimento) or "give me curry". Later "che-mi-curry" corrupted to chimichurri.

Chimichurri is made from finely chopped parsley
Parsley
Parsley is a species of Petroselinum in the family Apiaceae, native to the central Mediterranean region , naturalized elsewhere in Europe, and widely cultivated as an herb, a spice and a vegetable.- Description :Garden parsley is a bright green hairless biennial herbaceous plant in temperate...
, minced garlic
Garlic
Allium sativum, commonly known as garlic, is a species in the onion genus, Allium. Its close relatives include the onion, shallot, leek, chive, and rakkyo. Dating back over 6,000 years, garlic is native to central Asia, and has long been a staple in the Mediterranean region, as well as a frequent...
, vegetable oil or sunflower oil
Sunflower oil
Sunflower oil is the non-volatile oil expressed from sunflower seeds. Sunflower oil is commonly used in food as a frying oil, and in cosmetic formulations as an emollient. Sunflower oil was first industrially produced in 1835 in the Russian Empire.- Composition :Sunflower oil is mainly a...
, white or red vinegar
Vinegar
Vinegar is a liquid substance consisting mainly of acetic acid and water, the acetic acid being produced through the fermentation of ethanol by acetic acid bacteria. Commercial vinegar is produced either by fast or slow fermentation processes. Slow methods generally are used with traditional...
, and red pepper
Capsicum
Capsicum is a genus of flowering plants in the nightshade family, Solanaceae. Its species are native to the Americas where they have been cultivated for thousands of years, but they are now also cultivated worldwide, used as spices, vegetables, and medicines - and have become are a key element in...
flakes. Additional flavorings such as paprika
Paprika
Paprika is a spice made from the grinding of dried fruits of Capsicum annuum . In many European languages, the word paprika refers to bell peppers themselves. The seasoning is used in many cuisines to add color and flavor to dishes. Paprika can range from mild to hot...
(pimenton dulce), oregano
Oregano
Oregano – scientifically named Origanum vulgare by Carolus Linnaeus – is a common species of Origanum, a genus of the mint family . It is native to warm-temperate western and southwestern Eurasia and the Mediterranean region.Oregano is a perennial herb, growing from 20–80 cm tall,...
, cumin
Cumin
Cumin is a flowering plant in the family Apiaceae, native from the east Mediterranean to India. Its seeds are used in the cuisines of many different cultures, in both whole and ground form.-Etymology:...
, thyme
Thyme
Thyme is a culinary and medicinal herb of the genus Thymus.-History:Ancient Egyptians used thyme for embalming. The ancient Greeks used it in their baths and burnt it as incense in their temples, believing it was a source of courage...
, coriander
Coriander
Coriander is an annual herb in the family Apiaceae. Coriander is native to southern Europe and North Africa to southwestern Asia. It is a soft, hairless plant growing to tall. The leaves are variable in shape, broadly lobed at the base of the plant, and slender and feathery higher on the...
leaf (cilantro), lemon
Lemon
The lemon is both a small evergreen tree native to Asia, and the tree's ellipsoidal yellow fruit. The fruit is used for culinary and non-culinary purposes throughout the world – primarily for its juice, though the pulp and rind are also used, mainly in cooking and baking...
, and bay leaf
Bay leaf
Bay leaf refers to the aromatic leaf of the bay laurel . Fresh or dried bay leaves are used in cooking for their distinctive flavor and fragrance. The leaves are often used to flavor soups, stews, braises and pâtés in Mediterranean cuisine...
(laurel
Bay Laurel
The bay laurel , also known as sweet bay, bay tree, true laurel, Grecian laurel, laurel tree, or simply laurel, is an aromatic evergreen tree or large shrub with green, glossy leaves, native to the Mediterranean region. It is the source of the bay leaf used in cooking...
), and in the red version, tomato
Tomato
The word "tomato" may refer to the plant or the edible, typically red, fruit which it bears. Originating in South America, the tomato was spread around the world following the Spanish colonization of the Americas, and its many varieties are now widely grown, often in greenhouses in cooler...
and red bell pepper
Bell pepper
Bell pepper, also known as sweet pepper or a pepper and capsicum , is a cultivar group of the species Capsicum annuum . Cultivars of the plant produce fruits in different colors, including red, yellow, orange and green. Bell peppers are sometimes grouped with less pungent pepper varieties as...
may also be added. It can also be used as a marinade for grilled meat. Chimichurri is available bottled or dehydrated for preparing with oil and water.