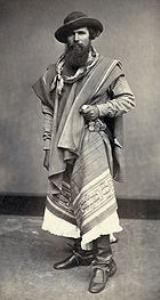 The word gaucho could be described as a loose equivalent to the North America
North America
North America is a continent wholly within the Northern Hemisphere and almost wholly within the Western Hemisphere. It is also considered a northern subcontinent of the Americas...
n "cowboy
Cowboy
A cowboy is an animal herder who tends cattle on ranches in North America, traditionally on horseback, and often performs a multitude of other ranch-related tasks. The historic American cowboy of the late 19th century arose from the vaquero traditions of northern Mexico and became a figure of...
" (vaquero, in Spanish). Like the North American word cowboy, Venezuela
Venezuela
Venezuela , officially called the Bolivarian Republic of Venezuela , is a tropical country on the northern coast of South America. It borders Colombia to the west, Guyana to the east, and Brazil to the south...
n or Colombia
Colombia
Colombia, officially the Republic of Colombia , is a unitary constitutional republic comprising thirty-two departments. The country is located in northwestern South America, bordered to the east by Venezuela and Brazil; to the south by Ecuador and Peru; to the north by the Caribbean Sea; to the...
n llanero
Llanero
A llanero is a Venezuelan or Colombian herder. The name is taken from the Llanos grasslands occupying western Venezuela and eastern Colombia. The Llanero were originally part Spanish and Indian and have a strong culture including a distinctive form of music.During the wars of independence,...
, or Chilean huaso
Huaso
A huaso is a Chilean countryman and skilled horseman, similar to the Argentinian, Rio Grande do Sul's or Uruguayan gaucho, the American cowboy, the Australian stockman, and Mexican vaquero and charro. A female huaso is called a huasa, although the term china is far more commonly used for his wife...
, or the Mexican charro
Charro
Charro is a term referring to a traditional horseman from Mexico, originating in the central-western regions primarily in the state of Jalisco including: Zacatecas, Durango, Guanajuato, Morelos, Puebla...
, the term often connotes the 19th century more than the present day; then gauchos made up the majority of the rural population, herding cattle on the vast estancia
Estância
Estância is a municipality located in the Brazilian state of Sergipe. Its population was 62,218 and its area is 642 km². The city is the seat of the Roman Catholic Diocese of Estância....
s, and practising hunting as their main economic activities.

what is the most inportant thing to a gaucho?
More
x