Encyclopedia
The Stille reaction is a chemical reaction
Chemical reaction
A chemical reaction is a process that leads to the transformation of one set of chemical substances to another. Chemical reactions can be either spontaneous, requiring no input of energy, or non-spontaneous, typically following the input of some type of energy, such as heat, light or electricity...
coupling an organotin compound with an sp2-hybridized organic halide
Halide
A halide is a binary compound, of which one part is a halogen atom and the other part is an element or radical that is less electronegative than the halogen, to make a fluoride, chloride, bromide, iodide, or astatide compound. Many salts are halides...
catalyzed by palladium
Palladium
Palladium is a chemical element with the chemical symbol Pd and an atomic number of 46. It is a rare and lustrous silvery-white metal discovered in 1803 by William Hyde Wollaston. He named it after the asteroid Pallas, which was itself named after the epithet of the Greek goddess Athena, acquired...
. The reaction is widely used in organic synthesis
Organic chemistry
Organic chemistry is a subdiscipline within chemistry involving the scientific study of the structure, properties, composition, reactions, and preparation of carbon-based compounds, hydrocarbons, and their derivatives...
.

The reaction is usually performed under inert atmosphere
Air-free technique
Air-free techniques refer to a range of manipulations in the chemistry laboratory for the handling of compounds that are air-sensitive. These techniques prevent the compounds from reacting with components of air, usually water and oxygen; less commonly carbon dioxide and nitrogen...
using dehydrated
Dehydration
In physiology and medicine, dehydration is defined as the excessive loss of body fluid. It is literally the removal of water from an object; however, in physiological terms, it entails a deficiency of fluid within an organism...
and degassed solvent
Solvent
A solvent is a liquid, solid, or gas that dissolves another solid, liquid, or gaseous solute, resulting in a solution that is soluble in a certain volume of solvent at a specified temperature...
, as oxygen causes the oxidation of the palladium catalyst and promotes homo-coupling of organic stannyl
Organotin
Organotin compounds or stannanes are chemical compounds based on tin with hydrocarbon substituents. Organotin chemistry is part of the wider field of organometallic chemistry. The first organotin compound was diethyltin diiodide, discovered by Edward Frankland in 1849...
compounds, and these side reactions lead to a decrease in the yield of the desired cross-coupling reaction.

Several reviews have been published.

The reaction mechanism
Reaction mechanism
In chemistry, a reaction mechanism is the step by step sequence of elementary reactions by which overall chemical change occurs.Although only the net chemical change is directly observable for most chemical reactions, experiments can often be designed that suggest the possible sequence of steps in...
of the Stille reaction has been well studied. The first step in this catalytic cycle
Catalytic cycle
A catalytic cycle in chemistry is a term for a multistep reaction mechanism that involves a catalyst . The catalytic cycle is the main method for describing the role of catalysts in biochemistry, organometallic chemistry, materials science, etc. Often such cycles show the conversion of a...
is the reduction of the palladium
Palladium
Palladium is a chemical element with the chemical symbol Pd and an atomic number of 46. It is a rare and lustrous silvery-white metal discovered in 1803 by William Hyde Wollaston. He named it after the asteroid Pallas, which was itself named after the epithet of the Greek goddess Athena, acquired...
catalyst (1) to the active Pd(0) species (2). The oxidative addition
Oxidative addition
Oxidative addition and reductive elimination are two important and related classes of reactions in organometallic chemistry. Oxidative addition is a process that increases both the oxidation state and coordination number of a metal centre...
of the organohalide (3) gives a cis intermediate which rapidly isomerizes to the trans intermediate 4. Transmetalation
Transmetalation
Transmetalation is a general chemical reaction type in organometallic chemistry describing the exchange of ligands between two metal centers....
with the organostannane (5) forms intermediate 7, which produces the desired product (8) and the active Pd(0) species (2) after reductive elimination. The oxidative addition and reductive elimination retain the stereochemical configuration of the respective reactants. 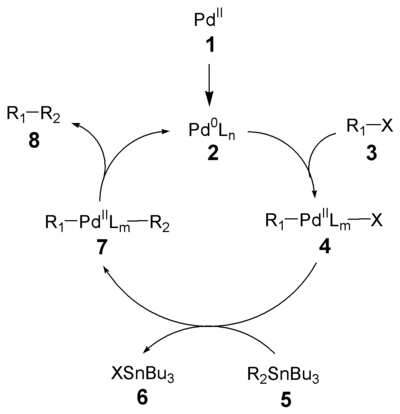 The low reactivity of alkyl stannanes is a serious drawback but can be remedied by the use of strongly polar solvents such as HMTP, DMF
Dimethylformamide
Dimethylformamide is an organic compound with the formula 2NCH. Commonly abbreviated as DMF , this colourless liquid is miscible with water and the majority of organic liquids. DMF is a common solvent for chemical reactions...
or dioxane.

In 2007 the Stille reaction was subjected to a special type of mass spectrometry
Mass spectrometry
Mass spectrometry is an analytical technique that measures the mass-to-charge ratio of charged particles.It is used for determining masses of particles, for determining the elemental composition of a sample or molecule, and for elucidating the chemical structures of molecules, such as peptides and...
allowing for the first time the direct experimental observation of a Pd(0)(PPh3)2 species (always assumed to exist but never before actually detected) and a cyclic transmetallation intermediate -Pd(II)-X-Sn-C- both through their radical cations.

Reactivity and specificity of the Stille reaction can be improved by the addition of stoichiometric amounts of Cu(I)
Copper
Copper is a chemical element with the symbol Cu and atomic number 29. It is a ductile metal with very high thermal and electrical conductivity. Pure copper is soft and malleable; an exposed surface has a reddish-orange tarnish...
or Mn(II)
Manganese
Manganese is a chemical element, designated by the symbol Mn. It has the atomic number 25. It is found as a free element in nature , and in many minerals...
salts.

The cross-coupling reaction can be inhibited by ligands of a high donor number
Donor number
In chemistry a donor number or DN is a qualitative measure of Lewis basicity. A donor number is defined as the negative enthalpy value for the 1:1 adduct formation between a Lewis base and the standard Lewis acid SbCl5 , in dilute solution in the noncoordinating solvent 1,2-dichloroethane with a...
.

In the presence of Cu(I) salts, palladium-on-carbon has been shown to be an effective catalyst. 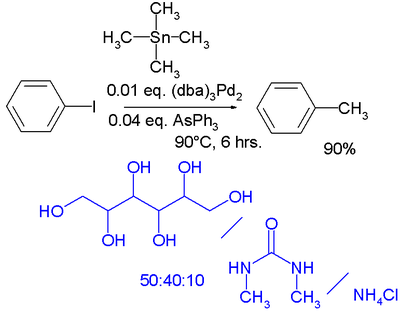