Organotin compounds or stannanes are chemical compounds based on tin
Tin
Tin is a chemical element with the symbol Sn and atomic number 50. It is a main group metal in group 14 of the periodic table. Tin shows chemical similarity to both neighboring group 14 elements, germanium and lead and has two possible oxidation states, +2 and the slightly more stable +4...
with hydrocarbon
Hydrocarbon
In organic chemistry, a hydrocarbon is an organic compound consisting entirely of hydrogen and carbon. Hydrocarbons from which one hydrogen atom has been removed are functional groups, called hydrocarbyls....
substituents. Organotin chemistry is part of the wider field of organometallic chemistry
Organometallic chemistry
Organometallic chemistry is the study of chemical compounds containing bonds between carbon and a metal. Since many compounds without such bonds are chemically similar, an alternative may be compounds containing metal-element bonds of a largely covalent character...
. The first organotin compound was diethyltin diiodide, discovered by Edward Frankland
Edward Frankland
Sir Edward Frankland, KCB, FRS was a chemist, one of the foremost of his day. He was an expert in water quality and analysis, and originated the concept of combining power, or valence, in chemistry. He was also one of the originators of organometallic chemistry.-Biography:Edward Frankland was born...
in 1849. An organotin compound is commercially applied as a hydrochloric acid
Hydrochloric acid
Hydrochloric acid is a solution of hydrogen chloride in water, that is a highly corrosive, strong mineral acid with many industrial uses. It is found naturally in gastric acid....
scavenger
Scavenger (chemistry)
A scavenger in chemistry is a chemical substance added to a mixture in order to remove or inactivate impurities or unwanted reaction products. Their use is wide-ranged:...
(or heat stabilizer) in polyvinyl chloride
Polyvinyl chloride
Polyvinyl chloride, commonly abbreviated PVC, is a thermoplastic polymer. It is a vinyl polymer constructed of repeating vinyl groups having one hydrogen replaced by chloride. Polyvinyl chloride is the third most widely produced plastic, after polyethylene and polypropylene. PVC is widely used in...
and as a biocide
Biocide
A biocide is a chemical substance or microorganism which can deter, render harmless, or exert a controlling effect on any harmful organism by chemical or biological means. Biocides are commonly used in medicine, agriculture, forestry, and industry...
. Tributyltin oxide
Tributyltin oxide
Tributyltin oxide , or bisoxide, is an organotin compound chiefly used as a biocide , especially a wood preservative. Its chemical formula is C24H54OSn2. It has the form of a thin, colorless to pale yellow liquid with melting point -45 °C, boiling point 180 °C, and slight water solubility...
has been extensively used as a wood preservative. Tributyltin compounds are used as marine anti-biofouling
Biofouling
Biofouling or biological fouling is the undesirable accumulation of microorganisms, plants, algae, or animals on wetted structures.-Impact:...
agents. Concerns over toxicity of these compounds (some reports describe biological effects to marine life at a concentration of 1 nanogram per liter) have led to a worldwide ban by the International Maritime Organization
International Maritime Organization
The International Maritime Organization , formerly known as the Inter-Governmental Maritime Consultative Organization , was established in Geneva in 1948, and came into force ten years later, meeting for the first time in 1959...
. n-Butyltin trichloride is used in the production of tin dioxide
Tin dioxide
Tin dioxide is the inorganic compound with the formula SnO2. The mineral form of SnO2 is called cassiterite, and this is the main ore of tin. With many other names , this oxide of tin is the most important raw material in tin chemistry...
layers on glass bottles by chemical vapor deposition
Chemical vapor deposition
Chemical vapor deposition is a chemical process used to produce high-purity, high-performance solid materials. The process is often used in the semiconductor industry to produce thin films. In a typical CVD process, the wafer is exposed to one or more volatile precursors, which react and/or...
.


and organostannane addition
Organostannane addition
Organostannane addition reactions comprise the nucleophilic addition of an allyl-, allenyl-, or propargylstannane to an aldehyde, imine, or, in rare cases, a ketone....
s (nucleophilic addition of an allyl-, allenyl-, or propargylstannanes to an aldehydes and imines). Organotin compounds are also used extensively in radical chemistry
Radical (chemistry)
Radicals are atoms, molecules, or ions with unpaired electrons on an open shell configuration. Free radicals may have positive, negative, or zero charge...
(eg. radical cyclizations
Radical cyclization
Radical cyclization reactions are organic chemical transformations that yield cyclic products via radical intermediates. They usually proceed in three basic steps: selective radical generation, radical cyclization, and conversion of the cyclized radical to product.-Introduction:Radical cyclization...
, Barton–McCombie deoxygenation, Barton decarboxylation
Barton decarboxylation
The Barton decarboxylation is a radical reaction in which a carboxylic acid is first converted to a thiohydroxamate ester . The product is then heated in the presence of a radical initiator and a suitable hydrogen donor to complete the reductive decarboxylation of the initial carboxylic acid...
, etc.).

Organotin compounds are used commercially in a wide range of applications such as biocides, insecticides, chemical intermediates and as catalysts.

Unlike their carbon analogues, tin compounds can also be coordinated to five and even six atoms instead of the regular four. These hypercoordinated compounds usually have electronegative substituents for stabilization. Lithium pentaorganostannates were first detected and characterized in solution in 1986, while in the subsequent year a six-coordinated tetraorganotin compound was reported. In 2007 a crystal structure of room-temperature stable (in argon
Argon
Argon is a chemical element represented by the symbol Ar. Argon has atomic number 18 and is the third element in group 18 of the periodic table . Argon is the third most common gas in the Earth's atmosphere, at 0.93%, making it more common than carbon dioxide...
) all-carbon pentaorganostannane was reported as the lithium
Lithium
Lithium is a soft, silver-white metal that belongs to the alkali metal group of chemical elements. It is represented by the symbol Li, and it has the atomic number 3. Under standard conditions it is the lightest metal and the least dense solid element. Like all alkali metals, lithium is highly...
salt with this structure: 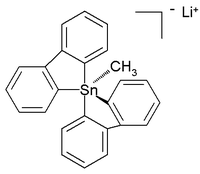