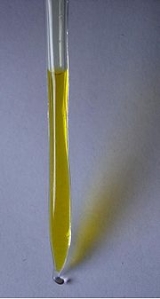 Overview
Chlorine is the chemical element
Chemical element
A chemical element is a pure chemical substance consisting of one type of atom distinguished by its atomic number, which is the number of protons in its nucleus. Familiar examples of elements include carbon, oxygen, aluminum, iron, copper, gold, mercury, and lead.As of November 2011, 118 elements...
with atomic number
Atomic number
In chemistry and physics, the atomic number is the number of protons found in the nucleus of an atom and therefore identical to the charge number of the nucleus. It is conventionally represented by the symbol Z. The atomic number uniquely identifies a chemical element...
17 and symbol Cl. It is the second lightest halogen
Halogen
The halogens or halogen elements are a series of nonmetal elements from Group 17 IUPAC Style of the periodic table, comprising fluorine , chlorine , bromine , iodine , and astatine...
, found in the periodic table
Periodic table
The periodic table of the chemical elements is a tabular display of the 118 known chemical elements organized by selected properties of their atomic structures. Elements are presented by increasing atomic number, the number of protons in an atom's atomic nucleus...
in group 17. The element forms diatomic molecules under standard conditions, called dichlorine. It has the highest electron affinity
Electron affinity
The Electron affinity of an atom or molecule is defined as the amount of energy released when an electron is added to a neutral atom or molecule to form a negative ion....
and the third highest electronegativity
Electronegativity
Electronegativity, symbol χ , is a chemical property that describes the tendency of an atom or a functional group to attract electrons towards itself. An atom's electronegativity is affected by both its atomic number and the distance that its valence electrons reside from the charged nucleus...
of all the elements; for this reason, chlorine is a strong oxidizing agent
Oxidizing agent
An oxidizing agent can be defined as a substance that removes electrons from another reactant in a redox chemical reaction...
.

The most common compound of chlorine, sodium chloride, has been known since ancient times; however, around 1630, chlorine gas was obtained by the Belgian chemist and physician Jan Baptist van Helmont.

How can the chlorine level as well as the Ph level of a 25,000 gal.swimming pool be destroyed in less than 24 hours - leaving the Ph level at over 8 p...