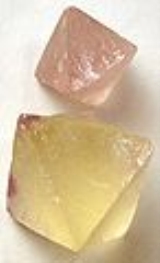 Overview
Fluorine is the chemical element
Chemical element
A chemical element is a pure chemical substance consisting of one type of atom distinguished by its atomic number, which is the number of protons in its nucleus. Familiar examples of elements include carbon, oxygen, aluminum, iron, copper, gold, mercury, and lead.As of November 2011, 118 elements...
with atomic number
Atomic number
In chemistry and physics, the atomic number is the number of protons found in the nucleus of an atom and therefore identical to the charge number of the nucleus. It is conventionally represented by the symbol Z. The atomic number uniquely identifies a chemical element...
9, represented by the symbol
Chemical symbol
A chemical symbol is a 1- or 2-letter internationally agreed code for a chemical element, usually derived from the name of the element, often in Latin. Only the first letter is capitalised...
F. It is the lightest element of the halogen
Halogen
The halogens or halogen elements are a series of nonmetal elements from Group 17 IUPAC Style of the periodic table, comprising fluorine , chlorine , bromine , iodine , and astatine...
column of the periodic table and has a single stable isotope
Isotope
Isotopes are variants of atoms of a particular chemical element, which have differing numbers of neutrons. Atoms of a particular element by definition must contain the same number of protons but may have a distinct number of neutrons which differs from atom to atom, without changing the designation...
, fluorine-19. At standard pressure and temperature
Standard conditions for temperature and pressure
Standard condition for temperature and pressure are standard sets of conditions for experimental measurements established to allow comparisons to be made between different sets of data...
, fluorine is a pale yellow gas composed of diatomic molecules, . In stars, fluorine is relatively rare compared to other light elements. On Earth, fluorine is more common; it is the 13th most abundant element in the crust.

Fluorine's most important mineral, fluorite
Fluorite
Fluorite is a halide mineral composed of calcium fluoride, CaF2. It is an isometric mineral with a cubic habit, though octahedral and more complex isometric forms are not uncommon...
, was first formally described in 1530, in the context of metal smelting.

What property of fluorine makes it the most electronegative?
More
x