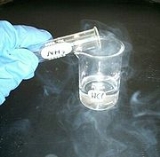 Overview
A chemical reaction is a process that leads to the transformation of one set of chemical substance
Chemical substance
In chemistry, a chemical substance is a form of matter that has constant chemical composition and characteristic properties. It cannot be separated into components by physical separation methods, i.e. without breaking chemical bonds. They can be solids, liquids or gases.Chemical substances are...
s to another. Chemical reactions can be either spontaneous
Spontaneous process
A spontaneous process is the time-evolution of a system in which it releases free energy and moves to a lower, more thermodynamically stable energy state...
, requiring no input of energy, or non-spontaneous, typically following the input of some type of energy, such as heat, light or electricity. Classically, chemical reactions encompass changes that strictly involve the motion of electrons in the forming and breaking of chemical bond
Chemical bond
A chemical bond is an attraction between atoms that allows the formation of chemical substances that contain two or more atoms. The bond is caused by the electromagnetic force attraction between opposite charges, either between electrons and nuclei, or as the result of a dipole attraction...
s, although the general concept of a chemical reaction, in particular the notion of a chemical equation
Chemical equation
A chemical equation is the symbolic representation of a chemical reaction where the reactant entities are given on the left hand side and the product entities on the right hand side. The coefficients next to the symbols and formulae of entities are the absolute values of the stoichiometric numbers...
, is applicable to transformations of elementary particles (such as illustrated by Feynman diagram
Feynman diagram
Feynman diagrams are a pictorial representation scheme for the mathematical expressions governing the behavior of subatomic particles, first developed by the Nobel Prize-winning American physicist Richard Feynman, and first introduced in 1948...
s), as well as nuclear reaction
Nuclear reaction
In nuclear physics and nuclear chemistry, a nuclear reaction is semantically considered to be the process in which two nuclei, or else a nucleus of an atom and a subatomic particle from outside the atom, collide to produce products different from the initial particles...
s.

The substance (or substances) initially involved in a chemical reaction are called reactants or reagents
Reagent
A reagent is a "substance or compound that is added to a system in order to bring about a chemical reaction, or added to see if a reaction occurs." Although the terms reactant and reagent are often used interchangeably, a reactant is less specifically a "substance that is consumed in the course of...
.

What is the study of the rates of chemical rections

Which chemicals from d best exothermic reaction with huge amount of energy at room conditions and they should not be toxic and they shuuld not be expl...

What do we end up with in a chemical reaction?
More
x