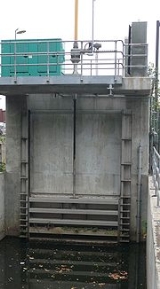 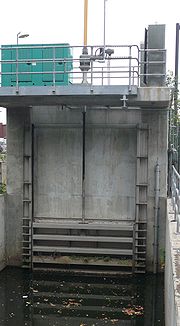 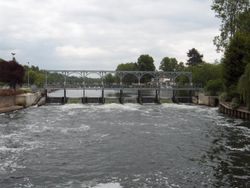 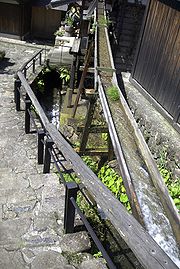 A sluice is a water channel that is controlled at its head by a gate (from the Dutch word 'sluis'). For example, a millrace is a sluice that channels water toward a water mill. The terms "sluice gate", "knife gate", and "slide gate" are used interchangeably in the water/wastewater control industry.

A sluice gate is traditionally a wooden or metal plate that slides in grooves in the sides of the channel. Sluice gates are commonly used to control water levels and flow rates in river
River
A river is a natural watercourse, usually freshwater, flowing towards an ocean, a lake, a sea, or another river. In a few cases, a river simply flows into the ground or dries up completely before reaching another body of water. Small rivers may also be called by several other names, including...
s and canal
Canal
Canals are man-made channels for water. There are two types of canal:#Waterways: navigable transportation canals used for carrying ships and boats shipping goods and conveying people, further subdivided into two kinds:...
s. They are also used in wastewater treatment plants and to recover minerals in mining
Mining
Mining is the extraction of valuable minerals or other geological materials from the earth, from an ore body, vein or seam. The term also includes the removal of soil. Materials recovered by mining include base metals, precious metals, iron, uranium, coal, diamonds, limestone, oil shale, rock...
operations, and in watermills.

The term sluice gate refers to any gate that operates by allowing water to flow under it. When a sluice gate is fully lowered, water sometimes spills over the top, in which case the gate operates as a weir
Weir
A weir is a small overflow dam used to alter the flow characteristics of a river or stream. In most cases weirs take the form of a barrier across the river that causes water to pool behind the structure , but allows water to flow over the top...
.

Usually, a mechanism drives the sluice gate up or down. This may be a simple, hand-operated, worm drive or rack-and-pinion drive
Rack and pinion
A rack and pinion is a type of linear actuator that comprises a pair of gears which convert rotational motion into linear motion. A circular gear called "the pinion" engages teeth on a linear "gear" bar called "the rack"; rotational motion applied to the pinion causes the rack to move, thereby...
, or it may be electrically or hydraulically
Hydraulics
Hydraulics is a topic in applied science and engineering dealing with the mechanical properties of liquids. Fluid mechanics provides the theoretical foundation for hydraulics, which focuses on the engineering uses of fluid properties. In fluid power, hydraulics is used for the generation, control,...
powered.

Flap sluice gate: A fully automatic type, which is controlled by the pressure head across it; operation is similar to that of a check valve
Check valve
A check valve, clack valve, non-return valve or one-way valve is a mechanical device, a valve, which normally allows fluid to flow through it in only one direction....
. It is a gate hinged at the top. When pressure is from one side, the gate is kept closed; a pressure from the other side opens the sluice when a threshold pressure is surpassed.
Vertical rising sluice gate: A plate sliding in the vertical direction, controlled by machinery.
Radial sluice gate: A structure, where a small part of a cylindrical surface serves as the gate, supported by radial constructions going through the cylinder's radius. On occasion, a counterweight is provided.
Rising sector sluice gate: Also a part of a cylindrical surface, which rests at the bottom of the channel and rises by rotating around its centre.
Needle sluice: A sluice formed by a number of thin needles held against a solid frame through water pressure as in a needle dam
Needle dam
A needle dam is a weir designed to maintain the level or flow of a river through the use of thin "needles" of wood. The needles are leaned against a solid frame and are not intended to be water-tight...
.
The gates of a Guillotine lock
Guillotine lock
A guillotine lock is a type of canal lock. The lock itself operates on the same principle as any normal pound lock, but is unusual in that each gate is a single piece, usually of steel, that slides vertically upwards when opened to allow a boat to traverse underneath...
work in a way similar to a sluice gate, but most canal lock
Lock (water transport)
A lock is a device for raising and lowering boats between stretches of water of different levels on river and canal waterways. The distinguishing feature of a lock is a fixed chamber in which the water level can be varied; whereas in a caisson lock, a boat lift, or on a canal inclined plane, it is...
gates are hinged to swing like doors.

In the Somerset Levels
Somerset Levels
The Somerset Levels, or the Somerset Levels and Moors as they are less commonly but more correctly known, is a sparsely populated coastal plain and wetland area of central Somerset, South West England, between the Quantock and Mendip Hills...
, sluice gates are known as clyse or clyce.
Most of the inhabitants of Guyana
Guyana
Guyana , officially the Co-operative Republic of Guyana, previously the colony of British Guiana, is a sovereign state on the northern coast of South America that is culturally part of the Anglophone Caribbean. Guyana was a former colony of the Dutch and of the British...
refer to sluices as kokers.

Sluice boxes are often used in the recovery of black sand
Black sand
Black sand is sand that is black in color. One type of black sand is a heavy, glossy, partly magnetic mixture of usually fine sands, found as part of a placer deposit. Another type of black sand, found on beaches near a volcano, consists of tiny fragments of lava.While some beaches are...
s, gold
Gold
Gold is a chemical element with the symbol Au and an atomic number of 79. Gold is a dense, soft, shiny, malleable and ductile metal. Pure gold has a bright yellow color and luster traditionally considered attractive, which it maintains without oxidizing in air or water. Chemically, gold is a...
, and other minerals from placer deposit
Placer deposit
In geology, a placer deposit or placer is an accumulation of valuable minerals formed by gravity separation during sedimentary processes. The name is from the Spanish word placer, meaning "alluvial sand". Placer mining is an important source of gold, and was the main technique used in the early...
s during placer mining
Placer mining
Placer mining is the mining of alluvial deposits for minerals. This may be done by open-pit or by various surface excavating equipment or tunneling equipment....
operations. They may be small-scale, as used in prospecting
Prospecting
Prospecting is the physical search for minerals, fossils, precious metals or mineral specimens, and is also known as fossicking.Prospecting is a small-scale form of mineral exploration which is an organised, large scale effort undertaken by mineral resource companies to find commercially viable ore...
, or much larger, as in commercial operations, where the material is first screened using a trommel
Trommel
A trommel is a screened cylinder used to separate materials by size - for example, separating the biodegradable fraction of mixed municipal waste or separating different sizes of crushed stone....
or screening plant. Typical sluices have transverse riffles over a carpet, which trap the heavy minerals, gemstone
Gemstone
A gemstone or gem is a piece of mineral, which, in cut and polished form, is used to make jewelry or other adornments...
s, and other valuable minerals. The result is a concentrate.