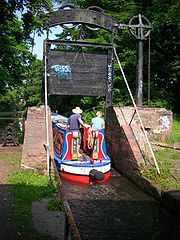 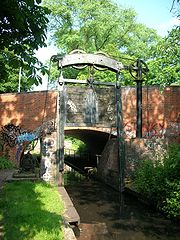 A guillotine lock is a type of canal lock. The lock itself operates on the same principle as any normal pound lock, but is unusual in that each gate is a single piece, usually of steel
Steel
Steel is an alloy that consists mostly of iron and has a carbon content between 0.2% and 2.1% by weight, depending on the grade. Carbon is the most common alloying material for iron, but various other alloying elements are used, such as manganese, chromium, vanadium, and tungsten...
, that slides vertically upwards when opened to allow a boat to traverse underneath. The resemblance to the French guillotine
Guillotine
The guillotine is a device used for carrying out :executions by decapitation. It consists of a tall upright frame from which an angled blade is suspended. This blade is raised with a rope and then allowed to drop, severing the head from the body...
is obvious.

Guillotine locks are relatively uncommon, but many are found on the waterways of East Anglia
East Anglia
East Anglia is a traditional name for a region of eastern England, named after an ancient Anglo-Saxon kingdom, the Kingdom of the East Angles. The Angles took their name from their homeland Angeln, in northern Germany. East Anglia initially consisted of Norfolk and Suffolk, but upon the marriage of...
. The advantages over the more traditional design are that the lock occupies less space, does not require room to swing open, and is quicker to fabricate and install. It also acts as a tidal lock, able to hold back water whichever side is higher, and can function as a stop lock (for example, Lifford Lane stop lock near Kings Norton Junction
Kings Norton Junction
Kings Norton Junction is the name of the canal junction where the Stratford-upon-Avon Canal terminates and meets the Worcester and Birmingham Canal at Kings Norton, Birmingham, England....
). It is mechanically more complex, however, requiring the use of a gantry
Gantry crane
Gantry cranes, bridge cranes, and overhead cranes, are all types of cranes which lift objects by a hoist which is fitted in a hoist trolley and can move horizontally on a rail or pair of rails fitted under a beam...
and overhead lifting gear.