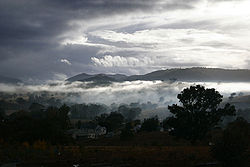 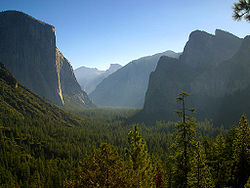 The word morning originally referred to the sunrise
Sunrise
Sunrise is the instant at which the upper edge of the Sun appears above the horizon in the east. Sunrise should not be confused with dawn, which is the point at which the sky begins to lighten, some time before the sun itself appears, ending twilight...
. Morning precedes midday
Noon
Noon is usually defined as 12 o'clock in the daytime. The word noon is also used informally to mean midday regarding the location of the sun not the middle of a persons day. Although this is a time around the middle of the day when people in many countries take a lunch break...
, afternoon
Afternoon
Afternoon is the time of day from noon to about 18:00.The term should not be confused with "after noon" , which is a translation of the Latin "post meridiem" as used in the 12-hour clock, meaning a time of day from noon to midnight.In Australia and New Zealand, the word "arvo" is a slang term for...
, and night
Night
Night or nighttime is the period of time when the sun is below the horizon. This occurs after dusk. The opposite of night is day...
in the sequence of a day
Day
A day is a unit of time, commonly defined as an interval equal to 24 hours. It also can mean that portion of the full day during which a location is illuminated by the light of the sun...
.

Morning is the part of the day usually reckoned from dawn
Dawn
Dawn is the time that marks the beginning of the twilight before sunrise. It is recognized by the presence of weak sunlight, while the sun itself is still below the horizon...
to noon
Noon
Noon is usually defined as 12 o'clock in the daytime. The word noon is also used informally to mean midday regarding the location of the sun not the middle of a persons day. Although this is a time around the middle of the day when people in many countries take a lunch break...
. The name (which comes from the Middle English
Middle English
Middle English is the stage in the history of the English language during the High and Late Middle Ages, or roughly during the four centuries between the late 11th and the late 15th century....
word morwening) was formed from the analogy
Analogy
Analogy is a cognitive process of transferring information or meaning from a particular subject to another particular subject , and a linguistic expression corresponding to such a process...
of evening
Evening
Evening is the period between the late afternoon and night when daylight is decreasing, around dinner time at 6pm. Though the term is subjective, evening is typically understood to begin before sunset, during the close of the standard business day and extend until nightfall, the beginning of night...
using the word "morn" (in Middle English morwen), and originally meant the coming of the sunrise as evening meant the beginning of the close of the day. The Middle English morwen dropped over time and became morwe, then eventually morrow, which properly means "morning", but was soon used to refer to the following day (i.e., "tomorrow"), as in other Germanic languages—English is unique in restricting the word to the newer usage. The Spanish word "mañana" has two meanings in English: "morning," and "tomorrow."

Another definition of morning is the first half of the day - the period between midnight and 11:59am. The most obvious manifestation of this meaning is in English speaking countries where the greeting changes from "good night" to "good morning" when midnight passes.

Morning may also be used in a strictly personal sense, to refer to the period immediately following waking up, irrespective of the current time of day. In this sense, morning encompasses the (mostly menial) prerequisites for full productivity and life in public (i.e. cleaning, a morning meal—often breakfast
Breakfast
Breakfast is the first meal taken after rising from a night's sleep, most often eaten in the early morning before undertaking the day's work...
, dressing, etc). The boundaries of such morning periods are by necessity idiosyncratic, but they are typically considered to have ended on reaching a state of full readiness for the day's productive activity. This modern permutation of morning is due largely to the worldwide spread of electricity, and the concomitant independence from natural light sources.

A morning newspaper
Newspaper
A newspaper is a scheduled publication containing news of current events, informative articles, diverse features and advertising. It usually is printed on relatively inexpensive, low-grade paper such as newsprint. By 2007, there were 6580 daily newspapers in the world selling 395 million copies a...
is one on sale in the mornings (as opposed to an evening newspaper, on sale from about noon onwards). In practice (though this may vary according to country) this means that a morning newspaper is available in early editions from before midnight on the night before its cover date, further editions being printed and distributed during the night. Previews of tomorrow's newspapers are often a feature of late night news programmes, such as Newsnight
Newsnight
Newsnight is a BBC Television current affairs programme noted for its in-depth analysis and often robust cross-examination of senior politicians. Jeremy Paxman has been its main presenter for over two decades....
in the United Kingdom
United Kingdom
The United Kingdom of Great Britain and Northern IrelandIn the United Kingdom and Dependencies, other languages have been officially recognised as legitimate autochthonous languages under the European Charter for Regional or Minority Languages...
.

Morning meals include breakfast
Breakfast
Breakfast is the first meal taken after rising from a night's sleep, most often eaten in the early morning before undertaking the day's work...
, though logically this need not be in the morning, and are varied across cultures. Brunch
Brunch
Brunch is a meal eaten between breakfast and lunch. The word is a portmanteau of breakfast and lunch.-Origin of the word:The 1896 supplement to the Oxford English Dictionary cites Punch magazine which wrote that the term was coined in Britain in 1895 to describe a Sunday meal for "Saturday-night...
is a late morning meal.

The ability of a person to wake up effectively in the morning may be influenced by a gene
Gene
A gene is a molecular unit of heredity of a living organism. It is a name given to some stretches of DNA and RNA that code for a type of protein or for an RNA chain that has a function in the organism. Living beings depend on genes, as they specify all proteins and functional RNA chains...
called "Period 3". This gene comes in two forms, a "short" and a "long" variant. It seems to affect the person's preference for mornings or evenings. People who carry the long variant were over-represented as morning people, while the ones carrying the short variant were evening preference people.
The source of this article is wikipedia, the free encyclopedia.  The text of this article is licensed under the GFDL.