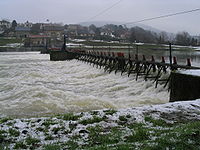 A needle dam is a weir
Weir
A weir is a small overflow dam used to alter the flow characteristics of a river or stream. In most cases weirs take the form of a barrier across the river that causes water to pool behind the structure , but allows water to flow over the top...
designed to maintain the level or flow of a river through the use of thin "needles" of wood. The needles are leaned against a solid frame and are not intended to be water-tight. Individual needles can be added or removed by hand to constrict the flow of the river, forming a sluice
Sluice
A sluice is a water channel that is controlled at its head by a gate . For example, a millrace is a sluice that channels water toward a water mill...
.

One early needle dam maintains the level of Lake Lucerne
Lake Lucerne
Lake Lucerne is a lake in central Switzerland and the fourth largest in the country.The lake has a complicated shape, with bends and arms reaching from the city of Lucerne into the mountains. It has a total area of 114 km² , an elevation of 434 m , and a maximum depth of 214 m . Its volume is 11.8...
in Lucerne, Switzerland by restricting the flow of the Reuss River
Reuss River
The Reuss is a river in Switzerland. With a length of and a drainage basin of , it is the fourth largest river in Switzerland...
, several are still in operation on the Meuse River
Meuse River
The Maas or Meuse is a major European river, rising in France and flowing through Belgium and the Netherlands before draining into the North Sea...
, France
France
The French Republic , The French Republic , The French Republic , (commonly known as France , is a unitary semi-presidential republic in Western Europe with several overseas territories and islands located on other continents and in the Indian, Pacific, and Atlantic oceans. Metropolitan France...
and others were built in the United States
United States
The United States of America is a federal constitutional republic comprising fifty states and a federal district...
in the 19th century.

A similar approach, now known as paddle and rymer weirs, was used since medieval times on the River Thames
River Thames
The River Thames flows through southern England. It is the longest river entirely in England and the second longest in the United Kingdom. While it is best known because its lower reaches flow through central London, the river flows alongside several other towns and cities, including Oxford,...
in England
England
England is a country that is part of the United Kingdom. It shares land borders with Scotland to the north and Wales to the west; the Irish Sea is to the north west, the Celtic Sea to the south west, with the North Sea to the east and the English Channel to the south separating it from continental...
to create flash lock
Flash lock
Early locks were designed with a single gate, known as a flash lock or staunch lock. The earliest European references to what were clearly flash locks were in Roman times....
s.
The source of this article is wikipedia, the free encyclopedia.  The text of this article is licensed under the GFDL.