Encyclopedia
The service rifle of a given army or armed force
Armed forces
The armed forces of a country are its government-sponsored defense, fighting forces, and organizations. They exist to further the foreign and domestic policies of their governing body, and to defend that body and the nation it represents from external aggressors. In some countries paramilitary...
is that which it issues as standard to its soldiers. In modern forces, this is typically a highly versatile and rugged assault rifle
Assault rifle
An assault rifle is a selective fire rifle that uses an intermediate cartridge and a detachable magazine. Assault rifles are the standard infantry weapons in most modern armies...
suitable for use in nearly all theatres
Theater (warfare)
In warfare, a theater, is defined as an area or place within which important military events occur or are progressing. The entirety of the air, land, and sea area that is or that may potentially become involved in war operations....
and environments. Service rifles are also often selected for their upgradability (e.g., the addition of underslung grenade launcher
Grenade launcher
A grenade launcher or grenade discharger is a weapon that launches a grenade with more accuracy, higher velocity, and to greater distances than a soldier could throw it by hand....
s, sights, flashlights
Tactical light
A tactical light is a flashlight used in conjunction with a firearm to aid low light target identification, allowing the marksman to simultaneously aim and illuminate the target. Tactical lights can be handheld or mounted to the weapon with the light beam parallel to the bore...
, laser sights, etc.)

Although certain weapons issued to special forces
Special forces
Special forces, or special operations forces are terms used to describe elite military tactical teams trained to perform high-risk dangerous missions that conventional units cannot perform...
units are rarely considered "service weapons" in the truest sense, certain specialist rifle
Rifle
A rifle is a firearm designed to be fired from the shoulder, with a barrel that has a helical groove or pattern of grooves cut into the barrel walls. The raised areas of the rifling are called "lands," which make contact with the projectile , imparting spin around an axis corresponding to the...
s and submachine gun
Submachine gun
A submachine gun is an automatic carbine, designed to fire pistol cartridges. It combines the automatic fire of a machine gun with the cartridge of a pistol. The submachine gun was invented during World War I , but the apex of its use was during World War II when millions of the weapon type were...
s are categorized as such if issued as per standing operating procedure
Standing operating procedure
The terms standard operating procedure or SOP, is used in a variety of different contexts, such as healthcare, education, industry or the military. The military uses the term Standing Operating Procedure- rather than Standard- because an SOP refers to an organization's unique procedures, which are...
s upon entering special environments or scenarios. These may include urban warfare
Urban warfare
Urban warfare is combat conducted in urban areas such as towns and cities. Urban combat is very different from combat in the open at both the operational and tactical level...
(FIBUA/MOUT) and jungle warfare
Jungle warfare
Jungle warfare is a term used to cover the special techniques needed for military units to survive and fight in jungle terrain.It has been the topic of extensive study by military strategists, and was an important part of the planning for both sides in many conflicts, including World War II and the...
environments.

Originally, rifles used in combat were not standard-issue weapons like the service rifles of today. Rifles were for specialist marksmen only, whilst the ordinary infantry were issued less accurate smoothbore
Smoothbore
A smoothbore weapon is one which has a barrel without rifling. Smoothbores range from handheld firearms to powerful tank guns and large artillery mortars.-History of firearms and rifling:...
musket
Musket
A musket is a muzzle-loaded, smooth bore long gun, fired from the shoulder. Muskets were designed for use by infantry. A soldier armed with a musket had the designation musketman or musketeer....
s which had a higher rate of fire, with bore diameters as high as 19 mm, or 0.75 inch. By the middle of the 19th century, however, rifles were becoming more and more common on the battlefield, with muskets being phased out. Originally, these combat rifles were single-shot muzzle-loading weapons, but as technology advanced through the 18th and 19th centuries, so too did the technique of loading rounds. First, breech-loading firearms, like the Prussian Needle gun
Needle gun
The Dreyse needle-gun was a military breechloading rifle, famous as the main infantry weapon of the Prussians, who adopted it for service in 1848 as the Dreyse Zündnadelgewehr, or Prussian Model 1848...
of the mid-19th century came to prominence, which then evolved into repeating weapons, such as the bolt-action Mosin-Nagant
Mosin-Nagant
The Mosin–Nagant is a bolt-action, internal magazine-fed, military rifle invented under the government commission by Russian and Belgian inventors, and used by the armed forces of the Russian Empire, the Soviet Union and various other nations....
rifle used by Imperial Russia
Russian Empire
The Russian Empire was a state that existed from 1721 until the Russian Revolution of 1917. It was the successor to the Tsardom of Russia and the predecessor of the Soviet Union...
in the late 19th and early 20th centuries and the Soviet Union
Soviet Union
The Soviet Union , officially the Union of Soviet Socialist Republics , was a constitutionally socialist state that existed in Eurasia between 1922 and 1991....
in World War II
World War II
World War II, or the Second World War , was a global conflict lasting from 1939 to 1945, involving most of the world's nations—including all of the great powers—eventually forming two opposing military alliances: the Allies and the Axis...
. By this time almost all prominent armies in the world had some sort of standard service rifle.

During the Second World War, there was yet another leap forward in rifle design which was to influence service rifles even today. That is, the use of a fired cartridge's gas emissions to automatically rechamber rounds into the breech once a bullet had been fired, as well as expelling the old cartridge. These weapons were known as gas-operated firearms
Gas-operated reloading
Gas-operation is a system of operation used to provide energy to operate autoloading firearms. In gas-operation, a portion of high pressure gas from the cartridge being fired is used to power a mechanism to extract the spent case and chamber a new cartridge. Energy from the gas is harnessed...
. Some of the earliest examples of these were most prominent in the Second World War, and were usually semi automatic, such as the American-made M1 Garand, first brought into service with the United States in 1936. These "battle rifle
Battle rifle
A battle rifle is a military service rifle that fires a full power rifle cartridge, such as 7.62x51mm NATO. While the designation of battle rifle is usually given to post-World War II select fire infantry rifles such as the H&K G3, the FN FAL or the M14, this term can also apply to older military...
s", as they were called, usually fired a "full-sized" (as opposed to an intermediate) rifle cartridge, such as the .30-06 Springfield
.30-06 Springfield
The .30-06 Springfield cartridge or 7.62×63mm in metric notation, was introduced to the United States Army in 1906 and standardized, and was in use until the 1960s and early 1970s. It replaced the .30-03, 6 mm Lee Navy, and .30 US Army...
or .303 British
.303 British
.303 British, or 7.7x56mmR, is a .311 inch calibre rifle and machine gun cartridge first developed in Britain as a blackpowder round put into service in December 1888 for the Lee-Metford rifle, later adapted to use smokeless powders...
. Another type of commonly issued rifle which was to become well known during this time was the assault rifle
Assault rifle
An assault rifle is a selective fire rifle that uses an intermediate cartridge and a detachable magazine. Assault rifles are the standard infantry weapons in most modern armies...
, a (usually) fully automatic rifle firing a lighter "intermediate" cartridge, as opposed to the full-sized cartridges used by battle rifles. The first of these was the Sturmgewehr 44, used by Nazi Germany in the later stages of the Second World War. The StG44 was not issued in large numbers, and was never adopted as Germany's service rifle. However, this weapon was to serve as the precursor to other assault rifles such as the Soviet AK-47
AK-47
The AK-47 is a selective-fire, gas-operated 7.62×39mm assault rifle, first developed in the Soviet Union by Mikhail Kalashnikov. It is officially known as Avtomat Kalashnikova . It is also known as a Kalashnikov, an "AK", or in Russian slang, Kalash.Design work on the AK-47 began in the last year...
, the American M-16
M16 rifle
The M16 is the United States military designation for the AR-15 rifle adapted for both semi-automatic and full-automatic fire. Colt purchased the rights to the AR-15 from ArmaLite, and currently uses that designation only for semi-automatic versions of the rifle. The M16 fires the 5.56×45mm NATO...
, the Belgian FN FAL
FN FAL
The Fusil Automatique Léger or FAL is a self-loading, selective fire battle rifle produced by the Belgian armaments manufacturer Fabrique Nationale de Herstal . During the Cold War it was adopted by many North Atlantic Treaty Organization countries, with the notable exception of the United States...
, the German G3
Heckler & Koch G3
The G3 is a 7.62mm battle rifle developed in the 1950s by the German armament manufacturer Heckler & Koch GmbH in collaboration with the Spanish state-owned design and development agency CETME ....
and the Swiss Sturmgewehr 57, which today supersede battle rifles as the service rifle of choice for militaries the world over. 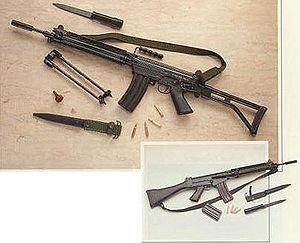 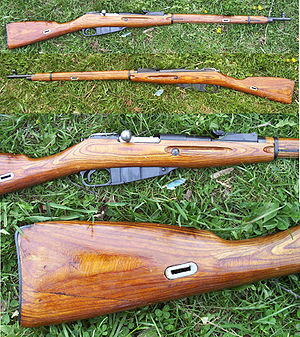