The TAR-21 has ejection ports on both sides of the rifle so it can easily be reconfigured for right or left-handed shooters. However, this process requires partial disassembly, so it can not be quickly reconfigured while the rifle is in use.

The TAR-21 design was created by Zalmen Shebs, with the express purpose of creating a weapon more suited to urban combat than the M16/M4 carbine. It is based on advanced ergonomics
Ergonomics
Ergonomics is the study of designing equipment and devices that fit the human body, its movements, and its cognitive abilities.The International Ergonomics Association defines ergonomics as follows:...
and composite materials in order to produce a more comfortable and reliable rifle. The TAR-21 is waterproof and lightweight. The weapon has a built in laser and MARS red dot sight
Red dot sight
A red dot sight is a common classification for a type of non-magnifying reflector sight for firearms that gives the user an aimpoint in the form of an illuminated red dot...
; one of the main advantages of having a built in system is that the weapon does not have to be zeroed after each use, but the TAR-21 can also be mounted with an array of different scopes such as EOTech holographic weapon sight
Holographic weapon sight
A holographic weapon sight or holographic diffraction sight is a non-magnifying gun sight that allows the user to look through a glass optical window and see a reticle image superimposed at a distance on the field of view...
s, night vision systems and other electronic devices.

The TAR-21 accepts standard STANAG
STANAG
STANAG is the NATO abbreviation for Standardization Agreement, which sets up processes, procedures, terms, and conditions for common military or technical procedures or equipment between the member countries of the alliance. Each NATO state ratifies a STANAG and implements it within their own...
magazines. It can also be mounted with the M203 grenade launcher
M203 grenade launcher
The M203 is a single shot 40 mm grenade launcher designed to attach to a rifle. It uses the same rounds as the older M79 break-action grenade launcher, which utilize the High-Low Propulsion System to keep recoil forces low. Though versatile, and compatible with many rifle models, the M203 was...
. Its ambidextrous fire mode
Selective fire
A selective fire firearm has at least one semi–automatic and one automatic mode, which is activated by means of a selector which varies depending on the weapon's design. Some selective fire weapons utilize burst fire mechanisms to limit the maximum or total number of shots fired automatically in...
selector above the pistol grip has a semi-automatic mode
Semi-automatic firearm
A semi-automatic, or self-loading firearm is a weapon which performs all steps necessary to prepare the weapon to fire again after firing—assuming cartridges remain in the weapon's feed device or magazine...
, burst mode
Burst mode (firearm)
In automatic firearms, burst mode or burst fire is a firing mode enabling the shooter to fire a predetermined number of rounds, usually 2 or 3 rounds and 100+ on anti-aircraft weapons, with a single pull of the trigger. This firing mode is commonly used in submachine guns, assault rifles and carbines...
, and a fully automatic mode
Automatic firearm
An automatic firearm is a firearm that loads another round mechanically after the first round has been fired.The term can be used to refer to semi-automatic firearms, which fire one shot per single pull of the trigger , or fully automatic firearms, which will continue to load and fire ammunition...
.

With the use of a relatively simple conversion kit, the MTAR-21 can be converted from a 5.56 mm assault rifle to a 9 mm submachine gun
Submachine gun
A submachine gun is an automatic carbine, designed to fire pistol cartridges. It combines the automatic fire of a machine gun with the cartridge of a pistol. The submachine gun was invented during World War I , but the apex of its use was during World War II when millions of the weapon type were...
loaded with 20, 25, and 32-round magazines. A suppressor
Suppressor
A suppressor, sound suppressor, sound moderator, or silencer, is a device attached to or part of the barrel of a firearm which reduces the amount of noise and flash generated by firing the weapon....
can also be added to the weapon, it is part of the 9 mm conversion kit. An integrated grenade launcher is currently being developed for the Micro Tavor. In November 2009, the Micro Tavor was selected as the future standard infantry weapon of the IDF.

The semi-automatic Tavor Carbine (TC-21) has been conceived for civilian customers, and as a police patrol carbine for those countries, or law enforcement agencies, where full-automatic firearms are issued only to SWAT
SWAT
A SWAT team is an elite tactical unit in various national law enforcement departments. They are trained to perform high-risk operations that fall outside of the abilities of regular officers...
-like units. A semi-automatic Tavor carbine was first seen at the 2002 SHOT Show
SHOT Show
The ' is an annual tradeshow for the shooting, hunting, and firearms industry. It is the biggest event of this type in the world together with IWA & OutdoorClassics , also taking place annually. "SHOT", besides being a general reference to shooting, is an acronym for "Shooting, Hunting and Outdoor...
, when agreements were announced between IMI and the Barrett Firearms Company
Barrett Firearms Company
Barrett Firearms Manufacturing is an American manufacturer of firearms and ammunition. It was founded in 1982 by Ronnie Barrett for the single purpose of building semi-automatic rifles chambered for the powerful 12.7×99mm NATO ammunition, originally developed for and used in M2 Browning machine...
to manufacture the Tavor in both its military and civilian variants in the United States
United States
The United States of America is a federal constitutional republic comprising fifty states and a federal district...
. This was probably done in order to allow Israel to procure the Tavor using United States military aid money, since, according to American military assistance agreements, said funds must be spent to purchase US-manufactured equipments. The agreement between IMI and Barrett was never finalized, and the semi-automatic Tavor carbine as shown at the 2002 SHOT Show was never manufactured, although that specific design has recently resurfaced. The current Tavor Carbine, made in Israel by IWI, has been designed with slightly shortened barrel, otherwise being identical to the standard TAR-21 assault rifle. As of 2008, it is available for civilian customers to purchase in Canada
Canada
Canada is a North American country consisting of ten provinces and three territories. Located in the northern part of the continent, it extends from the Atlantic Ocean in the east to the Pacific Ocean in the west, and northward into the Arctic Ocean...
. The Canadian civilian version comes standard with the Mepro reflex sight and a slightly longer barrel to meet the Canadian requirement for non-restricted semi-automatic centerfire rifles to have a barrel length of at least 470 mm. There was a report by Charles Daly President Micheal Kassnar that plans were being made to import, or at least partially build, the Tavor in the United States, which was released through the Charles Daly forums. However, since that time Charles Daly has gone out of business and the prospect of the sale of a semi-automatic version of the Tavor for the American civilian market is currently in question. 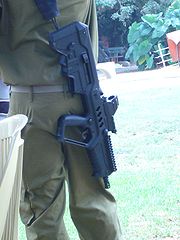 The rifle is in use by all the IDF regular Infantry battalions and brigades, except for Paratroopers Brigade.

In November 2009, it was announced that the Micro Tavor (MTAR-21), as opposed to the TAR-21, would become the standard infantry weapon of the IDF, with the addition of an integrated grenade-launcher.