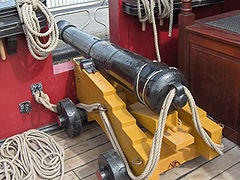 A smoothbore weapon is one which has a barrel
Gun barrel
A gun barrel is the tube, usually metal, through which a controlled explosion or rapid expansion of gases are released in order to propel a projectile out of the end at a high velocity....
without rifling
Rifling
Rifling is the process of making helical grooves in the barrel of a gun or firearm, which imparts a spin to a projectile around its long axis...
. Smoothbores range from handheld firearms to powerful tank gun
Tank gun
A tank gun is the main armament of a tank. Modern tank guns are large-caliber high-velocity guns, capable of firing kinetic energy penetrators, high explosive anti-tank rounds, and in some cases guided missiles. Anti-aircraft guns can also be mounted to tanks.-Overview:Tank guns are a specific...
s and large artillery mortar
Mortar (weapon)
A mortar is an indirect fire weapon that fires explosive projectiles known as bombs at low velocities, short ranges, and high-arcing ballistic trajectories. It is typically muzzle-loading and has a barrel length less than 15 times its caliber....
s.


History of firearms and rifling

Early firearms had smooth barrels, and fired projectiles with no significant spin. These projectiles had to have stable shapes, such as finned arrows or sphere
Sphere
A sphere is a perfectly round geometrical object in three-dimensional space, such as the shape of a round ball. Like a circle in two dimensions, a perfect sphere is completely symmetrical around its center, with all points on the surface lying the same distance r from the center point...
s, to minimize tumbling during flight. However, spherical bullet
Bullet
A bullet is a projectile propelled by a firearm, sling, or air gun. Bullets do not normally contain explosives, but damage the intended target by impact and penetration...
s do tend to rotate randomly during flight, and the Magnus effect
Magnus effect
The Magnus effect is the phenomenon whereby a spinning object flying in a fluid creates a whirlpool of fluid around itself, and experiences a force perpendicular to the line of motion...
means that even a relatively smooth sphere will curve when rotating on any axis not parallel to the direction of travel (see knuckleball
Knuckleball
A knuckleball is a baseball pitch with an erratic, unpredictable motion. The pitch is thrown so as to minimize the spin of the ball in flight. This causes vortices over the stitched seams of the baseball during its trajectory, which in turn can cause the pitch to change direction—and even...
for an example of intentional random tumbling.)

A rifled barrel, having spiral grooves or polygonal rifling
Polygonal rifling
Polygonal rifling is a type of gun barrel rifling where the traditional lands and grooves are replaced by "hills and valleys" in a rounded polygonal pattern, usually a hexagon or octagon....
, imparts a spin to the projectile
Projectile
A projectile is any object projected into space by the exertion of a force. Although a thrown baseball is technically a projectile too, the term more commonly refers to a weapon....
which stabilizes it and prevents it from tumbling. This does two things; first, it increases the accuracy of the projectile by eliminating the random drift due to the Magnus effect, and second, it allows a longer, heavier bullet to be fired from the same caliber barrel, increasing range and power (see external ballistics
External ballistics
External ballistics is the part of the science of ballistics that deals with the behaviour of a non-powered projectile in flight. External ballistics is frequently associated with firearms, and deals with the behaviour of the bullet after it exits the barrel and before it hits the target.-Forces...
). In the eighteenth century, the standard infantry arm was the smoothbore musket
Musket
A musket is a muzzle-loaded, smooth bore long gun, fired from the shoulder. Muskets were designed for use by infantry. A soldier armed with a musket had the designation musketman or musketeer....
; by the nineteenth century, rifled barrels became the norm, increasing the power and range of the infantry weapon significantly.

The shotgun
Shotgun
A shotgun is a firearm that is usually designed to be fired from the shoulder, which uses the energy of a fixed shell to fire a number of small spherical pellets called shot, or a solid projectile called a slug...
fires multiple, non-coaxial
Coaxial
In geometry, coaxial means that two or more forms share a common axis; it is the three-dimensional linear analogue of concentric.Coaxial cable, as a common example, has a wire conductor in the centre a circumferential outer conductor and an insulating medium called the dielectric separating...
projectiles; firing out of a rifled barrel would cause a very high spread resulting in a doughnut-shaped pattern of shot (with a high projectile density
Density
The mass density or density of a material is defined as its mass per unit volume. The symbol most often used for density is ρ . In some cases , density is also defined as its weight per unit volume; although, this quantity is more properly called specific weight...
on the periphery, and a low projectile density in the interior). While this may be acceptable at close ranges (some spreader chokes are rifled to produce wide patterns at close range) this is not desirable at longer ranges, where a tight, consistent pattern is required to improve accuracy.

Another smoothbore weapon in use today is the 37-mm riot gun
Riot gun
A riot gun or less-lethal launcher is a type of firearm that is used to fire "non-lethal" ammunition for the purpose of suppressing riots. Less-lethal launchers may be special purpose firearms designed for riot control use, or standard firearms, usually shotguns and grenade launchers, adapted to...
, which fires non-lethal munitions at short range at groups of people, where a high degree of accuracy is not required.

The cannon made the transition from smoothbore firing cannonball
Cannonball
A cannonball is round shot ammunition for a cannon.By analogy, cannonball is also the name or nickname of:* A diving technique in swimming; unlike competitive diving techniques, however, its purpose is to maximize, rather than minimize, splash upon water entry.People* Cannonball Adderley, jazz alto...
s to rifled firing shells
Shell (projectile)
A shell is a payload-carrying projectile, which, as opposed to shot, contains an explosive or other filling, though modern usage sometimes includes large solid projectiles properly termed shot . Solid shot may contain a pyrotechnic compound if a tracer or spotting charge is used...
in the 19th century. In more recent times anti-armour artillery, for example tank gun
Tank gun
A tank gun is the main armament of a tank. Modern tank guns are large-caliber high-velocity guns, capable of firing kinetic energy penetrators, high explosive anti-tank rounds, and in some cases guided missiles. Anti-aircraft guns can also be mounted to tanks.-Overview:Tank guns are a specific...
s used for attacking tanks, is moving back to smoothbore.

The armour-piercing gun evolution has also shown up in small arms, particularly the now abandoned U.S. Advanced Combat Rifle
Advanced Combat Rifle
The Advanced Combat Rifle was a United States Army program to find a replacement for the M16 assault rifle. The program's total cost is approximately US$300 million...
(ACR) program. The ACR "rifles" used smoothbore barrels to fire single or multiple flechette
Flechette
A flechette is a pointed steel projectile, with a vaned tail for stable flight. The name comes from French , "little arrow" or "dart", and sometimes retains the acute accent in English: fléchette.-Bulk and artillery use:...
s (tiny darts), rather than bullets, per pull of the trigger, to provide long range, flat trajectory, and armor-piercing abilities. Just like kinetic-energy tank rounds, flechettes are too long and thin to be stabilized by rifling and perform best from a smoothbore barrel. The ACR program was abandoned due to reliability problems and poor terminal ballistics
Terminal ballistics
Terminal ballistics, a sub-field of ballistics, is the study of the behavior of a projectile when it hits its target. It is often referred to as stopping power when dealing with human or other living targets. Terminal ballistics is relevant both for small caliber projectiles as well as for large...
.

Mortar
Mortar (weapon)
A mortar is an indirect fire weapon that fires explosive projectiles known as bombs at low velocities, short ranges, and high-arcing ballistic trajectories. It is typically muzzle-loading and has a barrel length less than 15 times its caliber....
barrels are typically muzzle-loading smoothbores. Since mortars fire bombs which are dropped down the barrel and must not be a tight fit, a smooth barrel is essential. The bombs are fin-stabilized.

In the United States, firearms with a rifled barrel and a bore diameter greater than 0.5 inches (12.7 mm) are generally considered to be destructive device
Destructive device
In the United States, a destructive device is a firearm or explosive device regulated by the National Firearms Act of 1934.Examples of destructive devices include grenades, and firearms with a bore over one half of an inch, including some semi-automatic shotguns. While current federal laws allow...
s under the National Firearms Act
National Firearms Act
The National Firearms Act , 73rd Congress, Sess. 2, ch. 757, , enacted on June 26, 1934, currently codified as amended as , is an Act of Congress that, in general, imposes a statutory excise tax on the manufacture and transfer of certain firearms and mandates the registration of those firearms. The...
, and therefore heavily regulated, while smaller weapons are not. The exception to this is shotguns with rifled barrels for firing shotgun slug
Shotgun slug
A shotgun slug is a heavy lead projectile, that may have pre-cut rifling, intended for use in a shotgun and often used for hunting large game. The first effective shotgun slug was introduced by Wilhelm Brenneke in 1898, and his design remains in use today...
s, such as the Paradox gun
Paradox gun
A Paradox gun is a firearm made by Holland & Holland with the last two to three inches of the muzzle rifled and the rest smooth, intended to be used as both a rifle and shotgun....
.
The source of this article is wikipedia, the free encyclopedia.  The text of this article is licensed under the GFDL.