Encyclopedia
The armed forces of a country
Country
A country is a region legally identified as a distinct entity in political geography. A country may be an independent sovereign state or one that is occupied by another state, as a non-sovereign or formerly sovereign political division, or a geographic region associated with a previously...
are its government
Government
Government refers to the legislators, administrators, and arbitrators in the administrative bureaucracy who control a state at a given time, and to the system of government by which they are organized...
-sponsored defense, fighting forces, and organizations. They exist to further the foreign and domestic policies of their governing body, and to defend that body and the nation it represents from external aggressors. In some countries paramilitary
Paramilitary
A paramilitary is a force whose function and organization are similar to those of a professional military, but which is not considered part of a state's formal armed forces....
forces are included in a nation's armed forces. Armed force is the use of armed forces to achieve political objectives.

The study of the use of armed forces is called military science
Military science
Military science is the process of translating national defence policy to produce military capability by employing military scientists, including theorists, researchers, experimental scientists, applied scientists, designers, engineers, test technicians, and military personnel responsible for...
. Broadly speaking, this involves considering offense and defense at three "levels": strategy
Strategy
Strategy, a word of military origin, refers to a plan of action designed to achieve a particular goal. In military usage strategy is distinct from tactics, which are concerned with the conduct of an engagement, while strategy is concerned with how different engagements are linked...
, operational art, and tactics
Military tactics
Military tactics, the science and art of organizing an army or an air force, are the techniques for using weapons or military units in combination for engaging and defeating an enemy in battle. Changes in philosophy and technology over time have been reflected in changes to military tactics. In...
. All three levels study the application of the use of force in order to achieve a desired objective. 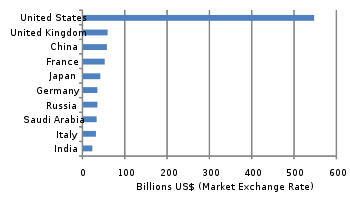 The obvious benefit to a country in maintaining armed forces is in providing protection from foreign threats and from internal conflict. In recent decades armed forces personnel have also been used as emergency civil support roles in post-disaster situations. On the other hand, they may also harm a society by engaging in counter-productive (or merely unsuccessful) warfare.
Expenditure on science and technology to develop weapons and systems sometimes produces side benefits, although some claim that greater benefits could come from targeting the money directly.