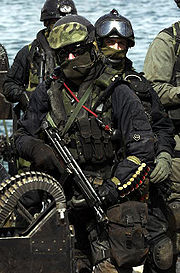 The unit's other name is Jednostka Wojskowa 2305 (Military Unit 2305). The acronym GROM is related to the name Operacja Most ("operation bridge"), Grupa Realizacyjna Operacji Most.

In the 1970s and 1980s, there were several formations of special forces units within Poland, but these were either trained in purely military tasks (sabotage, disruption of communications and such) or in purely counter-terrorist roles. After the Polish embassy in Bern was taken over by militants of the Polish Revolutionary Home Army in 1982, General Edwin Rozłubirski proposed that a clandestine military unit be established to counter the threat from terrorism
Terrorism
Terrorism is the systematic use of terror, especially as a means of coercion. In the international community, however, terrorism has no universally agreed, legally binding, criminal law definition...
and other unconventional threats. This proposal, however, was initially rejected by the "Polish People's Army".

In 1989, many Jews were allowed to emigrate from the Soviet Union
Soviet Union
The Soviet Union , officially the Union of Soviet Socialist Republics , was a constitutionally socialist state that existed in Eurasia between 1922 and 1991....
to Israel
Israel
The State of Israel is a parliamentary republic located in the Middle East, along the eastern shore of the Mediterranean Sea...
. Poland was one of the handful of countries that provided aid in the form of organization for the operation, later dubbed Operation Bridge (Operacja Most). After two Polish diplomats were shot in Beirut
Beirut
Beirut is the capital and largest city of Lebanon, with a population ranging from 1 million to more than 2 million . Located on a peninsula at the midpoint of Lebanon's Mediterranean coastline, it serves as the country's largest and main seaport, and also forms the Beirut Metropolitan...
, Lt. Col.
Lieutenant colonel
Lieutenant colonel is a rank of commissioned officer in the armies and most marine forces and some air forces of the world, typically ranking above a major and below a colonel. The rank of lieutenant colonel is often shortened to simply "colonel" in conversation and in unofficial correspondence...
Sławomir Petelicki was sent to Lebanon
Lebanon
Lebanon , officially the Republic of LebanonRepublic of Lebanon is the most common term used by Lebanese government agencies. The term Lebanese Republic, a literal translation of the official Arabic and French names that is not used in today's world. Arabic is the most common language spoken among...
to secure the transfer of civilians and the Polish diplomatic
Diplomacy
Diplomacy is the art and practice of conducting negotiations between representatives of groups or states...
outposts.

Upon his return to Poland, he presented his plan for the creation of a special military unit to the Ministry of Interior, a force that would be trained in special operations to be deployed in the defense of Polish citizens in situations similar to the one in Lebanon. Petelicki's ideas were well-received and on July 8, 1990, GROM was formally established as JW 2305.

Sławomir Petelicki was chosen as the first commander of the newly formed unit. As a Polish intelligence officer from Służba Bezpieczeństwa specializing in reconnaissance, sabotage, and diversion, he seemed perfectly suited to oversee the unit's initial formation. He gathered around himself a group of like-minded and professional officers and set about choosing soldier
Soldier
A soldier is a member of the land component of national armed forces; whereas a soldier hired for service in a foreign army would be termed a mercenary...
s that would be fit for special operations. Due to the high risks involved in special service, it was decided that all men should be professional soldiers. The first batch of recruits all came from a variety of already-existing special units with the Polish armed forces. Among these were:


During its formative first few years, GROM remained completely secret and hidden from the public. It was first reported to the press in 1992 and became known to the public in 1994, after their first major military operation in Haiti
Haiti
Haiti , officially the Republic of Haiti , is a Caribbean country. It occupies the western, smaller portion of the island of Hispaniola, in the Greater Antillean archipelago, which it shares with the Dominican Republic. Ayiti was the indigenous Taíno or Amerindian name for the island...
.

Candidates applying to serve in GROM have to pass psychological and durability tests, along with the so-called truth test, a physically and psychologically exhausting field test designed to filter out the weaker applicants. GROM soldiers train with the best special forces units in the world.

The training of GROM soldiers includes a variety of disciplines. All of them undergo the same specialized training in anti-terrorism and special operations, as well as frogman
Frogman
A frogman is someone who is trained to scuba diving or swim underwater in a military capacity which can include combat. Such personnel are also known by the more formal names of combat diver or combatant diver or combat swimmer....
, sniping
Sniper
A sniper is a marksman who shoots targets from concealed positions or distances exceeding the capabilities of regular personnel. Snipers typically have specialized training and distinct high-precision rifles....
, and parachuting. In four-man teams, each soldier must be prepared to assume the respective responsibilities of his colleagues, should it become necessary. JW GROM has their basic Spec. Ops training provided by the Swedish Navy's Special Command for Tactical Operations based in Karlskrona. Sweden's primary Naval Base. Approximately 75% of GROM personnel are trained as medics or paramedics. In addition, each group is supported by several professional physicians. It is also assumed that a lot of GROM operatives are proficient in at least two foreign languages.

GROM operatives are trained in the capture or kill methods. 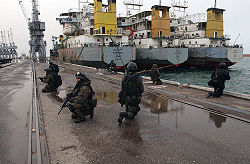 - Special Forces Group Belgium - Marinejegerkommandoen (MJK)
Marinejegerkommandoen
Marinejegerkommandoen is a Norwegian maritime special forces unit. It was formally established in 1951. It is located in Ramsund in the northern part of Norway and at Haakonsvern Naval Base in Bergen...
- 1 Pułk Specjalny Komandosów
1st Special Commando Regiment
The 1 Pułk Specjalny Komandosów, 1 PSK is one of the three special operations forces currently operating within the Polish military's structure, Special Forces of Poland....
- FORMOZA - Special Naval Frogman Group
FORMOZA
Formoza, MJDS en. "Naval Special Operations Unit", is a new name of the Polish Navy Special Operations Sections , now Special forces of Poland , which used to operate also under the name of Special Naval Frogmen Group...
- Special Air Service
Special Air Service
Special Air Service or SAS is a corps of the British Army constituted on 31 May 1950. They are part of the United Kingdom Special Forces and have served as a model for the special forces of many other countries all over the world...
- Joint Task Force Two (JTF2) - 1st SFOD - D (Delta Force)
Delta Force
1st Special Forces Operational Detachment-Delta is one of the United States' secretive Tier One counter-terrorism and Special Mission Units. Commonly known as Delta Force, Delta, or The Unit, it was formed under the designation 1st SFOD-D, and is officially referred to by the Department of Defense...
- DEVGRU - Sayeret Matkal
Sayeret Matkal
Sayeret Matkal is a special forces unit of the Israel Defence Forces , which is subordinated to the intelligence directorate Aman. First and foremost a field intelligence-gathering unit, conducting deep reconnaissance behind enemy lines to obtain strategic intelligence, Sayeret Matkal is also...
- Kommando Spezialkräfte
Kommando Spezialkräfte
The KSK Kommando Spezialkräfte is an elite military unit composed of Special Operations soldiers from the ranks of Germany’s Bundeswehr and organized as such under the Division Spezielle Operationen . The unit has received many decorations and awards from both NATO and its affiliates...
- GSG9 der Bundespolizei
GSG 9
The GSG 9 der Bundespolizei , is the elite counter-terrorism and special operations unit of the German Federal Police.-History and name:...