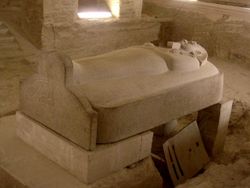 A sarcophagus is a funeral receptacle for a corpse
Cadaver
A cadaver is a dead human body.Cadaver may also refer to:* Cadaver tomb, tomb featuring an effigy in the form of a decomposing body* Cadaver , a video game* cadaver A command-line WebDAV client for Unix....
, most commonly carved or cut from stone. The word "sarcophagus" comes from the Greek
Greek language
Greek is an independent branch of the Indo-European family of languages. Native to the southern Balkans, it has the longest documented history of any Indo-European language, spanning 34 centuries of written records. Its writing system has been the Greek alphabet for the majority of its history;...
σαρξ sarx meaning "flesh", and φαγειν phagein meaning "to eat", hence sarkophagus means "flesh-eating"; from the phrase lithos sarkophagos (λιθος σαρκοφάγος). Since lithos is Greek for stone, lithos sarcophagos means 'flesh eating stone'. The word came to refer to a particular kind of limestone
Limestone
Limestone is a sedimentary rock composed largely of the minerals calcite and aragonite, which are different crystal forms of calcium carbonate . Many limestones are composed from skeletal fragments of marine organisms such as coral or foraminifera....
that was thought to decompose the flesh of corpses interred within it.

" Sarcophagi were undoubtedly used by the Egyptians
Egyptians
Egyptians are nation an ethnic group made up of Mediterranean North Africans, the indigenous people of Egypt.Egyptian identity is closely tied to geography. The population of Egypt is concentrated in the lower Nile Valley, the small strip of cultivable land stretching from the First Cataract to...
prior to the building of the Great Pyramid, but it was not until after the days of Trajan
Trajan
Trajan , was Roman Emperor from 98 to 117 AD. Born into a non-patrician family in the province of Hispania Baetica, in Spain Trajan rose to prominence during the reign of emperor Domitian. Serving as a legatus legionis in Hispania Tarraconensis, in Spain, in 89 Trajan supported the emperor against...
that the Greek
Greek
Greek may refer to anything related to:*Greece, a country in south-eastern Europe*Greeks, an ethnic group*Greek language, or more specifically:**Mycenaean Greek, **Ancient Greek,...
s and Roman
Roman
Roman or Romans may refer to:* A thing or person of or from the city of Rome-History:* Ancient Rome ** Roman Kingdom ** Roman Republic ** Roman Empire...
s produced the monumental and richly sculptured examples with are found in the museums of Europe today."

Sarcophagi were most often designed to remain above ground, hence were often ornately carved, decorated or elaborately constructed. Some were built to be freestanding, as a part of an elaborate tomb
Tomb
A tomb is a repository for the remains of the dead. It is generally any structurally enclosed interment space or burial chamber, of varying sizes...
or series of tombs, while others were intended for placement in crypt
Crypt
In architecture, a crypt is a stone chamber or vault beneath the floor of a burial vault possibly containing sarcophagi, coffins or relics....
s. In Ancient Egypt, a sarcophagus formed the external layer of protection for a royal
Royal family
A royal family is the extended family of a king or queen regnant. The term imperial family appropriately describes the extended family of an emperor or empress, while the terms "ducal family", "grand ducal family" or "princely family" are more appropriate to describe the relatives of a reigning...
mummy, with several layers of coffin
Coffin
A coffin is a funerary box used in the display and containment of dead people – either for burial or cremation.Contemporary North American English makes a distinction between "coffin", which is generally understood to denote a funerary box having six sides in plan view, and "casket", which...
s nested within, and was often carved out of alabaster
Alabaster
Alabaster is a name applied to varieties of two distinct minerals, when used as a material: gypsum and calcite . The former is the alabaster of the present day; generally, the latter is the alabaster of the ancients...
.

Sarcophagi – sometimes metal or plaster as well as limestone – were also used by the ancient Romans
Ancient Rome
Ancient Rome was a thriving civilization that grew on the Italian Peninsula as early as the 8th century BC. Located along the Mediterranean Sea and centered on the city of Rome, it expanded to one of the largest empires in the ancient world....
until the early Christian burial
Christian burial
A Christian burial is the burial of a deceased person with specifically Christian ecclesiastical rites; typically, in consecrated ground. Until recent times Christians generally objected to cremation, and practised inhumation almost exclusively, but this opposition has weakened, and now vanished...
preference for interment underground, often in a limestone sepulchre
Sepulchre
The rock-cut tombs in ancient Israel are a group of hundreds of rock-cut tombs constructed in Israel in ancient times. They were cut into the rock, sometimes with elaborate facades and multiple burial chambers. Some are free-standing, but most are caves. Each tomb typically belonged to a...
, led to their falling out of favor.\


Revival in the United States

Sarcophagi make a return to the cemeteries of America during the last quarter part of the 19th Century, at which time "it was decidedly the most prevalent of all memorials in our cemeteries.". They continued to be popular into the 1950s at which time the popularity of flat memorials (making for easier grounds maintenance) made them obsolete. None-the-less a 1952 catalog from the memorial industry still included 8 pages of them, broken down into, Georgian
Georgian architecture
Georgian architecture is the name given in most English-speaking countries to the set of architectural styles current between 1720 and 1840. It is eponymous for the first four British monarchs of the House of Hanover—George I of Great Britain, George II of Great Britain, George III of the United...
and Classical
Classical architecture
Classical architecture is a mode of architecture employing vocabulary derived in part from the Greek and Roman architecture of classical antiquity, enriched by classicizing architectural practice in Europe since the Renaissance...
detail, a Gothic
Gothic architecture
Gothic architecture is a style of architecture that flourished during the high and late medieval period. It evolved from Romanesque architecture and was succeeded by Renaissance architecture....
and Renaissance
Renaissance architecture
Renaissance architecture is the architecture of the period between the early 15th and early 17th centuries in different regions of Europe, demonstrating a conscious revival and development of certain elements of ancient Greek and Roman thought and material culture. Stylistically, Renaissance...
adaptation, and a Modern
Modern architecture
Modern architecture is generally characterized by simplification of form and creation of ornament from the structure and theme of the building. It is a term applied to an overarching movement, with its exact definition and scope varying widely...
variant.
Shown on the right are two sarcophagi from the late 19th Century located in Laurel Hill Cemetery
Laurel Hill Cemetery
Laurel Hill Cemetery, in Philadelphia, Pennsylvania, is the second major garden or rural cemetery in the United States. It was designated a National Historic Landmark in 1998, one of only a few cemeteries to receive the distinction....
in Philadelphia, Pennsylvania
Philadelphia, Pennsylvania
Philadelphia is the largest city in the Commonwealth of Pennsylvania and the county seat of Philadelphia County, with which it is coterminous. The city is located in the Northeastern United States along the Delaware and Schuylkill rivers. It is the fifth-most-populous city in the United States,...
. the one in the back, the Werner Monument created by Alexander Milne Calder
Alexander Milne Calder
Alexander Milne Calder was an American sculptor best known for the architectural sculpture of Philadelphia City Hall. Both his son, Alexander Stirling Calder, and grandson, Alexander "Sandy" Calder, were to become significant sculptors in the 20th century.-Biography:Alexander Milne Calder was...
(1879) features the spirit or soul of the deceased being released.