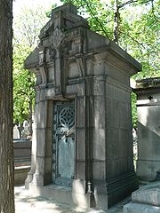 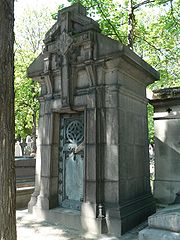 A tomb is a repository for the remains of the dead
Death
Death is the permanent termination of the biological functions that sustain a living organism. Phenomena which commonly bring about death include old age, predation, malnutrition, disease, and accidents or trauma resulting in terminal injury....
. It is generally any structurally enclosed interment space or burial chamber, of varying sizes. The word is used in a broad sense to encompass a number of such types of places of interment or, occasionally, burial
Grave (burial)
A grave is a location where a dead body is buried. Graves are usually located in special areas set aside for the purpose of burial, such as graveyards or cemeteries....
, including: 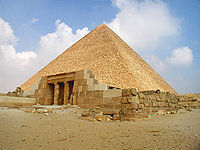 As indicated, tombs are generally located in or under religious buildings, such as churches, or in cemeteries or churchyards. However, they may also be found in catacombs
Catacombs
Catacombs, human-made subterranean passageways for religious practice. Any chamber used as a burial place can be described as a catacomb, although the word is most commonly associated with the Roman empire...
, on private land or, in the case of early or pre-historic tombs, in what is today open landscape.

The tomb of Emperor Nintoku
Emperor Nintoku
was the 16th emperor of Japan, according to the traditional order of succession.No firm dates can be assigned to this emperor's life or reign, but he is conventionally considered to have reigned from 313–399.-Legendary narrative:...
(the 16th Emperor of Japan
Japan
Japan is an island nation in East Asia. Located in the Pacific Ocean, it lies to the east of the Sea of Japan, China, North Korea, South Korea and Russia, stretching from the Sea of Okhotsk in the north to the East China Sea and Taiwan in the south...
) is the largest in the world by area. However, the Pyramid of Khufu in Egypt
Egypt
Egypt , officially the Arab Republic of Egypt, Arabic: , is a country mainly in North Africa, with the Sinai Peninsula forming a land bridge in Southwest Asia. Egypt is thus a transcontinental country, and a major power in Africa, the Mediterranean Basin, the Middle East and the Muslim world...
is the largest by volume.