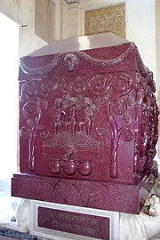 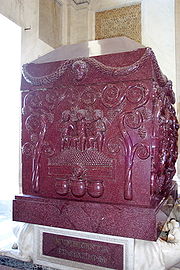 The production of Roman sarcophagi with carved decoration spread due to the gradual abandonment of the rite of cremation in favour of inhumation over the course of the 2nd century throughout the empire. However, burial in such sarcophagi was expensive and thus reserved for wealthy families. The end of the Christian persecutions desired by Gallienus
Gallienus
Gallienus was Roman Emperor with his father Valerian from 253 to 260, and alone from 260 to 268. He took control of the Empire at a time when it was undergoing great crisis...
in 260 began a period of peace for the Christians that lasted until the end of that century and allowed Christianity to spread in the army, in senior administrative posts and even the emperor's circles. In the second half of the 3rd century, especially due to increased demand from this group of wealthy Christians, the use of sarcophagi spread widely, with plastic treatments following trends in contemporary sculpture.