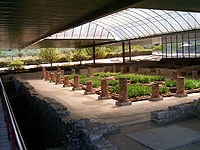 Classical architecture can be divided into:

Only Greek architecture in the time before Alexander (who died in 323 BC) carries an authentic, ethnic designation. The ancient Greeks were notoriously dismissive of barbaroi – those who spoke Greek non-natively or not at all. The incredible conquests of Alexander and the subsequent application of a veneer of Greek city states to a base of Egyptian, Semitic, and Iranian populations produced an important change. Though speaking Greek remained the touchstone of whether one was a member of civilized culture or not, the ethnic diversification of the Hellenistic world is clear. The formal elements of classical Greek architecture were applied to temples for gods never worshipped in Greece
Greece
Greece , officially the Hellenic Republic , and historically Hellas or the Republic of Greece in English, is a country in southeastern Europe....
.

The Romans can be seen as the latest Hellenistic empire. Pre-imperial architecture is more or less Etruscan
Etruscan civilization
Etruscan civilization is the modern English name given to a civilization of ancient Italy in the area corresponding roughly to Tuscany. The ancient Romans called its creators the Tusci or Etrusci...
with some Greek elements. By the time the Romans conquered mainland Greece in the 2nd century BC they were importing Greek craftsmen to build major public buildings. The term Roman Art
Roman art
Roman art has the visual arts made in Ancient Rome, and in the territories of the Roman Empire. Major forms of Roman art are architecture, painting, sculpture and mosaic work...
and Roman Architecture
Roman architecture
Ancient Roman architecture adopted certain aspects of Ancient Greek architecture, creating a new architectural style. The Romans were indebted to their Etruscan neighbors and forefathers who supplied them with a wealth of knowledge essential for future architectural solutions, such as hydraulics...
has no ethnic meaning relating to Italic Romans. Most art historians
Art history
Art history has historically been understood as the academic study of objects of art in their historical development and stylistic contexts, i.e. genre, design, format, and style...
assume that it has the ethnic meaning of "Greek-speaking slave" or "Greek-speaking free laborer," in fact.

Most of the styles originating in post-renaissance
Renaissance
The Renaissance was a cultural movement that spanned roughly the 14th to the 17th century, beginning in Italy in the Late Middle Ages and later spreading to the rest of Europe. The term is also used more loosely to refer to the historical era, but since the changes of the Renaissance were not...
Europe
Europe
Europe is, by convention, one of the world's seven continents. Comprising the westernmost peninsula of Eurasia, Europe is generally 'divided' from Asia to its east by the watershed divides of the Ural and Caucasus Mountains, the Ural River, the Caspian and Black Seas, and the waterways connecting...
can be described as classical architecture. This broad use of the term is employed by Sir John Summerson
John Summerson
Sir John Newenham Summerson CH CBE was one of the leading British architectural historians of the 20th century....
in The Classical Language of Architecture
The Classical Language of Architecture
The 1965 compilation of six radio programmes by Sir John Summerson, The Classical Language of Architecture is a 60-some page discussion of the origins of classical architecture and their movements through Antiquity, Renaissance, Mannerist, Baroque, Neoclassical, and Georgian periods...
.

The "elements" of classical architecture have been applied in radically different architectural contexts than those for which they were developed. The classical orders – Doric
Doric order
The Doric order was one of the three orders or organizational systems of ancient Greek or classical architecture; the other two canonical orders were the Ionic and the Corinthian.-History:...
, Ionic
Ionic order
The Ionic order forms one of the three orders or organizational systems of classical architecture, the other two canonic orders being the Doric and the Corinthian...
, and Corinthian
Corinthian order
The Corinthian order is one of the three principal classical orders of ancient Greek and Roman architecture. The other two are the Doric and Ionic. When classical architecture was revived during the Renaissance, two more orders were added to the canon, the Tuscan order and the Composite order...
– have meaning in the stylistic history of 5th century BC Greece, shifting to the developments in 1st century AD Gaul
Gaul
Gaul was a region of Western Europe during the Iron Age and Roman era, encompassing present day France, Luxembourg and Belgium, most of Switzerland, the western part of Northern Italy, as well as the parts of the Netherlands and Germany on the left bank of the Rhine. The Gauls were the speakers of...
, with the styles revived over and over again since then.

In the grammar of architecture, the word petrification is often used when discussing the development of sacred structures, such as temples, mainly with reference to developments in the Greek world. During the Archaic (please see Archaic Greece) and early Classical periods (about the 6th and early 5th centuries BCE), the architectural forms of the earliest temples had solidified and the Doric (see Classical order
Classical order
A classical order is one of the ancient styles of classical architecture, each distinguished by its proportions and characteristic profiles and details, and most readily recognizable by the type of column employed. Three ancient orders of architecture—the Doric, Ionic, and Corinthian—originated in...
) emerged as the predominant element. A widely accepted theory in classical studies is that the earliest temple structures were of wood and the great forms, or elements of architectural style, were codified and rather permanent by the time we see the Archaic emergent and established. It was during this period, at different times and places in the Greek world, that the use of dressed and polished stone replaced the wood in these early temples, but the forms and shapes of the old wooden styles were retained, just as if the wooden structures had turned to stone, thus the designation petrification for this process.

This careful preservation of the primitive wooden appearance in the stone fabric of the newer buildings was scrupulously observed and this suggests that it may have been dictated by religion rather than aesthetics, although the exact reasons are now lost in the mists of antiquity. And not everyone within the great reach of Mediterranean civilization made this transition. The Etruscans in Italy were, from their earliest period, greatly influenced by their contact with Greek culture and religion, but they retained their wooden temples (with some exceptions) until their culture was completely absorbed into the Roman world, with the great wooden Temple of Jupiter on the Capitol in Rome itself being a good example. Nor was it the lack of knowledge of stone working on their part that prevented them from making the transition from timber to dressed stone.