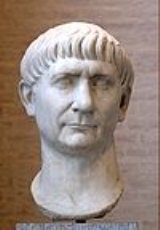 In what manner did trajan rule such as kind evil ruthless what are key events during his reign any significant events how/why their rule end...
More

Early life and rise to power

How did the Romans feel about Trajan?

Looking for a vexillum for the circa for 55 b.c.-54 b.c. during ceasar era

97    Emperor Nerva is forced by the Praetorian Guard, to adopt general Marcus Ulpius Trajanus as his heir and successor.

98    Trajan becomes Roman Emperor after the death of Nerva.

109    The Aqua Traiana is inaugurated by emperor Trajan, the aqueduct channels water from Lake Bracciano, 40 kilometers (25 miles) north-west of Rome.